This post reflects on our leaving day from the Sequoias, May the 4th, after we spent a really amazing 6 days in the Sequoias.

The day started lovely. Got up at 9am which late for us although we both had a patchy night of sleep -John still has his cough that keeps him awake. We set off from our lovely campsite shortly after our coffees. 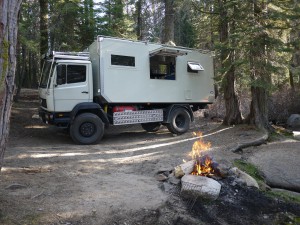 One of our favourite camp spots.
Sequoia Nat. Forest
May 2013

Then within 10 minutes at our first quick toilet stop we bumped into Eric and Chris! We met them and spent a very pleasant evening a few days ago. They are a brilliant, outdoor-y, open minded couple from San Diego and it was great to see them again on our leaving day!

They were just as pleasantly surprised to see us as we were to see them. We had another nice long chat. Changing suggestions on campsites in the area -Eric was giving us a few good tips on camps on our way.  We said goodbyes again and finally set off. We were a bit behind already and then we didn’t know yet how focus-demanding and windy the road will be ahead of us.

After a while we decided to stop by another giant forest. It was a tiny bit of a “waste” of time. I mean the forest was wonderful but it was Saturday and was absolutely packed with people, the path all the way paved which takes away the nature feeling of a walk in the forest so we didn’t enjoy it as much as our other hikes in the past few days. Anyhow we jumped back in to the cab feeling a little more pressure about time. As we were driving down the windy road at one of another trailhead we spotted (and them us too at the same time) the Argentinean couple! It was such a happy treat to see them again -and strangely, I thought of them earlier to check their blog to see where they are.And there they were! 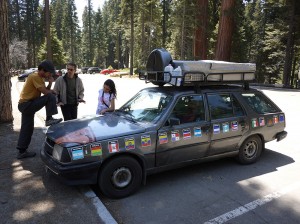 How strange and wonderful. Again, an unplanned hour talk -sharing ideas on places to visit, camp, buy food etc then we were even more behind! We took off at about 3.40!

As John didn’t have breakfast or anything to eat at all so I suggested to stop and fix up a quick late lunch which we did.  It was quick and soon we were back on the windy road again. 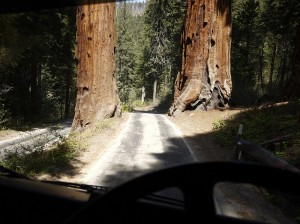 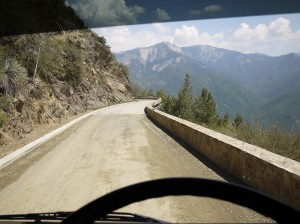 We were a few miles away from the end of the road (effectively the park exit/entrance) where we saw a dump station which was perfect. We needed empty our waste tank and rinse it out. It didn’t take longer than 20 minutes but we had to do it. Jump back in a cab, making our way and enjoying the view as the river winding with the road down in the canyon. Then suddenly we saw red-blue flashing lights and a few cars -one of them upside down in front of us. We stopped there and the line behind us quickly got longer and longer. The ranger advised us that it will take long and appreciate our cooperation. 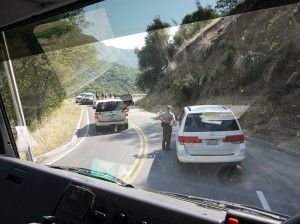 As we found out later no one was seriously injured and the driver -young guy, was arrested for drink driving. There was a little club-afternoon gathering at our vehicle and we all. Chattering away for about an hour when they finally let us through.

So we were moving again. A few minutes later we reached the Park entrance/ exit and then we were on flat roads. There were still a fair amount of mileage had to be done still but needed food so stopped at a supermarket to fill up. I think at that point John thought it will take a long few hours till we reach our camp tonight so he suggested to eat there in a restaurant. We found one overlooking the river so we treated ourselves with an eat-out dinner. Actually the food was forgettable but it was nice to sit on the terrace, people watching and hook up to their wifi.

Straight after this at around 7pm we were back on the road, this time knowing that we didn’t need anything and all we have to do is plough on and get to the southern Sequoia Nat. Forest as soon as we can. We knew -from our map that there’s a couple of campsites right after the entrance but before that we had a long drive ahead of us through farming roads. The sun was going down fast and soon it was dusk just when the road became quite focus-demanding again. 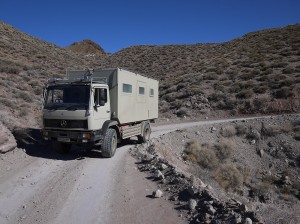 The flat farm land turned to hills and the road became narrow, windy and steep then finally we reached the forest.  It was dark and around 9pm when we crossed to the National Forest border -where we know, we can park freely and it is usually full of camp opportunities and I thought we are just minutes away from stop and settle for the night.

Well, this forest wasn’t giving us any chance. We had those two ‘campsites’ way behind us (never found them-the map must be way out of date) and all side roads -usually where we find good sites were all closed so we didn’t have a chance but keep moving on.

I was getting tired and cranky. John was pretty amazing driving all day on challenging roads, driving in the dark on the equally challenging road here and trying to keep my spirit up. Strangely this National Forest was full of private lands so parking rules were strict and overnight parking was prohibited.

It was nearly 10pm when found one side road and a big gravel area by the road. I would’ve been ok to stop there but John didn’t feel comfortable.

So we moved back on the main road where we found a baby owl sitting in the middle of the road. Luckily John saw it in time and went around it then we turned around and drove back. We don’t want to leave him on the road. Poor little bird, must’ve been hit, looked confused and clearly distressed (though no signs of physical damage) He let Johnny pick him up with a soft scarf and move him onto the grass. Of course there are numbers of danger there for him too but at least he was clear of the road. We felt terrible for him and I like to believe that he will recovered safely.

This event took the edge of my worry of finding the campsite and within a few minutes an open road offered us opportunities. We turned down on it heading to the woods where we saw a levelled ground with fire pit and we knew this was our home for the night.

It was really wonderful, the forest was perfectly silent and the stars above us couldn’t been sparklier. We stood outside for a while and admired them. Then all of a sudden the Universe signalled us with two amazing shooting stars for two wishes, and we hoped the baby owl sees the morning.