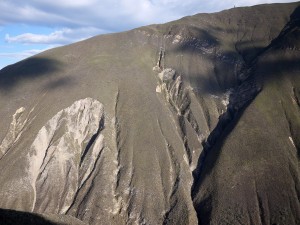 Our previous time in Peru didn’t involve the northern Peruvian Highlands. John, particularly really wanted to visit this part. It is at least a 1.5-2 weeks beautiful drive loop with much to see on the way, waterfalls, an archaeological site Kuelap, ancient tombs carved in the cliffs, mummy museum, deep canyons and mountains and so on.

Our start -leaving Vilcabamba didn’t go very well. John fell into a mysterious illness with painful stomach cramps and a night-long fever. The German and Swiss couples didn’t want to leave us on our own in case John’s condition gets worse. This was very kind of them but John felt a slight pressure to move on as he didn’t want to hold up the group. We crossed the border and dropped down to just a few hundreds of meters in elevation and were reminded of the humidity and heat for one night. John’s condition kept fluctuating, he felt a bit better one minute but then felt awful again and we were in and out of pharmacies and finally when he took our advice to see a doctor it was Sunday and no doctors available. By this point we were travelling every day longer or shorter distances but he was keeping up like a trouper.

After about 4-5 days we reached our first point of interest with was a waterfall (apparently the World’s third longest one) First we found a little village over the valley and with a prime view at the waterfall, where all three vehicles and us were welcome. They made us park up next to the football pitch on the main village square. The first moments felt right and people were so friendly and smiley, even the village representative walked up to us to say welcome and all but when he said that we arrived at the right time as there is a whole day-night fiesta just started we weren’t sure of the opportunity of an all night party. We all remembered very well the 9 day fiesta in Vilcabamba so we thanked them very kindly but left faster than you could imagine. Luckily we found another village that was so sweet and friendly. They let us park up on their basketball court and one by one, half the village came to introduce themselves and welcome us. 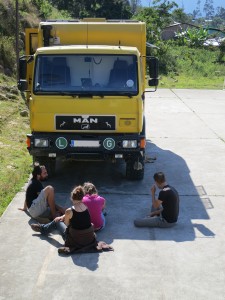 The next morning the German/Swiss guys went for the hike to visit the waterfall meanwhile John and I decided to drive on for a bit to the next bigger town, Chachapoyas in seek of a pharmacy or med help.

Here we bumped in to the Bulgarian couple who we met about 4-5 months ago in Guyana. It is so incredible how you meet someone again in the smallest corner of the world. It surely cheered us up and we spent the afternoon together. 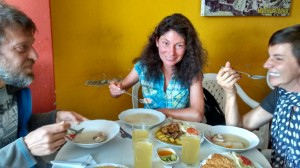 They helped us translate at the pharmacy and we ended up with a bag full of pills. That night we drove out of town a few kms to a viewpoint of a deep canyon where they let us park for the night. 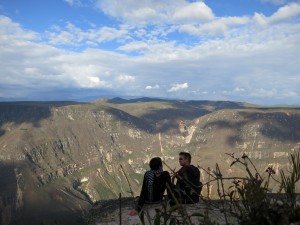 The following morning we were back in town for a breakfast with Teddy and Yuri for the last time. This was their last day of the travel, from here they were on for a 23 hour bus ride to Lima and fly back to Europe the next day. It was really nice to see and spend a couple of hours with them again. At the same time the German and Swiss trucks rolled in so we were hooked again.

From Chachapoyas we headed to the main attraction, Kuélap, an archaeological site well worth seeing. Some of the travel books suggests that if you don’t have a chance to see Machu Picchu, this is the best alternative.

The drive was wonderful but the last 37 kms is gravel (not bad at all) but it took 1.5 hours just that last bit. It is surely breathtaking. Once at the site, there was plenty of space to park up and a little while later the two other trucks ran in as well as the US solo overland biker, Brian who we met in Chachapoyas the day before. So a nice little group got together here and we spent 3 blissful days here, visiting the site, eating, chilling out, schmoozing with the local very friendly dogs and just generally enjoying the scenery. 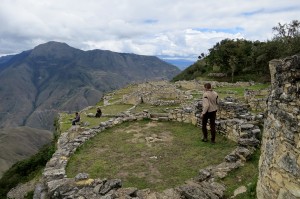 John was getting better and on the last day at Kuelap we said goodbye to Brian and left for the next destination which was the ancient tombs that are carved and built in vertical cliffs. It wasn’t far but took about 3 hours to get there. Had to drive through a small village where, again everyone was so friendly and smiley. We parked up near the trailhead and the following day hiked up to the tombs. It was really worth it and had the most wonderful view. 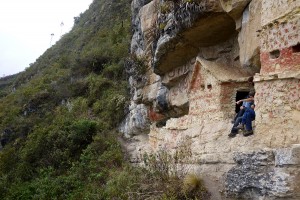 The following day we were ready to get to our next point of interest the mummy museum. We missed the opening hours by 15 minutes and the car park gates were closed where we were hoping to stay overnight. Though just a 100 meters further up we found a good alternative. The next morning we had a chance to visit the museum before we headed on. 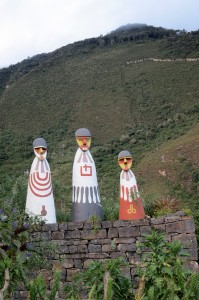 This was the section of the road (about 100 km between Leymebamba and Cajamarca) that we thought was mud road and particularly difficult in the rainy season. At the museum -which is quite cute and have friendly staff they gave us water and a very good piece of information about the road. It is paved! All the way. Though is a single lane road and very narrow at places, but is doable with an our-size truck. 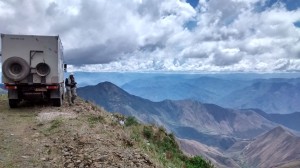 As we were turning out from the museum’s car park we saw a hitchhiker and picked him up. A Russian Buddhist hitchhiker who travels around the world and now he is in our truck.

The road was smooth and fast and the scenery was breathtaking all the way to Cajamarca. It took a lot of spaghetti, spicy Thai soup cooking, storytelling and 3 days to get to Cajamarca and a little beyond to Cumbe Mayo. 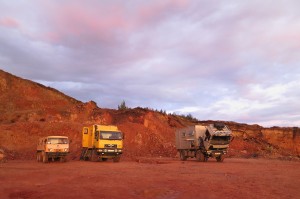 Driving across Cajamarca is a bit of a nightmare especially with three large vehicles and listening to the GPS which constantly wants you to drive through the historical centre and drive down on stairs! Then John took over and finally found the right way and lead everyone out of town, By then we all were on the edge of our patience, hunger, need for a wee and so on, oh! and we had our engine oil seal broke so we were using oil and pressure so had to be quick. It was a nightmare actually. But as always, John was a hero. When we reached our destination (we didn’t stay at the sites’ car park as they were greedy and wanted money from us, so rather stayed at a large gravel spot nearby with a spectacular view of a stone forest and sunset) everyone was not just in a better mood but somehow having a great time laughing at ourselves struggling through town. The boys jumped on fixing the seal and this was the time when actually John got Burt’s power back. Which was a great news for over all to us. I cooked and got everyone in for dinner. We even opened the bottle of alcoholic herb drink we bought in Venezuela to celebrate and most of us got slightly hammered on it. 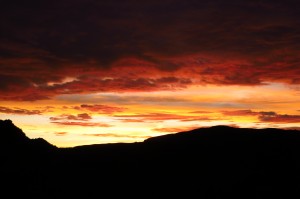 We stayed one more night.

The whole loop took us about 2 weeks and we sure had ups and downs and good fun, good food and drinks. This was our last port of call, from here we were taking the faster route to get down to Huanchaco, where we started 7 weeks ago to have a few days catch up on internet, shopping, washing then say goodbye to our friends, to the Buddha and John and I head to Bolivia in a few days just driving down the PanAm (possibly the most boring, unimaginative route) to make sure we can have a couple of weeks in Bolivia before hopefully meeting some friends in Argentina for Christmas. (Yes, that’s you, the Snaith family)