We are approaching to the end of April and we are still in Bakersfield. We’ve been treated like kings by the family & friends, even (speaking for myself) got into a slight easy-life routine, while John’s been busy improving things on Burt I’ve been going to morning swims or yoga, coffee and long chats with Leslie and visiting her mum, hang out with the nephews – Andrew and Christian then dinner with family or friends and so on. It’s so easy to slip into these things but as even good things come to an end, eventually this had to as well. After two and a half months in Bakersfield, heavy heartedly (and in a bit of a panic -last minute Hap A and B booster jabs, pick up some malaria pills) said our goodbyes to the family and headed to Pismo Beach on the 22nd of April.

Lianne and Kevin invited us to an Airstream rally north of Monterey for the last weekend of April. Despite Monterey was the opposite direction where we generally need to go we decided to go anyway. Spending a few more days with Lianne and Kevin and their Airstream-enthusiast friends sounded like a fun idea.

We left Bakersfield on the Monday before the Monterey weekend giving ourselves time and a chance to visit a couple of places on the way. It was also Lianne’s suggestion to visit the State Park in Pismo which is one of the two (?) beaches in the US where you can legally park up on the beach feet from the water. We were drawn to this idea since we heard about it so we fitted this visit in our schedule. 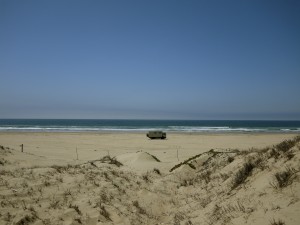 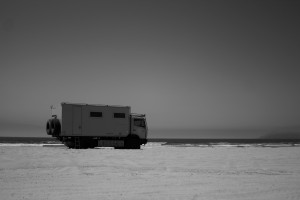 We spent a couple of nights on the beach which was great -and, ahem necessary as we stuck in sand. On our arrival (which was in pitch dark) we couldn’t be bothered worry about it. We were level, we had water, food, a few bottles of beer so decided to stay a couple of days. As it was Monday/Tuesday the beach was quiet and peaceful. Apparently this patch of land is packed with ATV vehicles off-roading on the sandy beach at weekends. We loved spending our two days walking along the shore, reading, writing, sleeping and generally just relaxing. 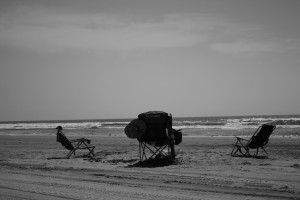 We got up early on the morning of our departure knowing we have a good couple of hours digging ahead of us so after our coffees we packed up and grabbed the shovel. John had the right hand side and I was in charge of the left hand side. 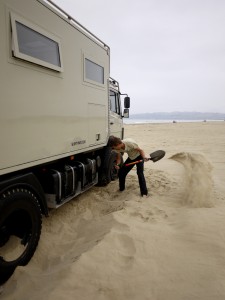 John is on the case. 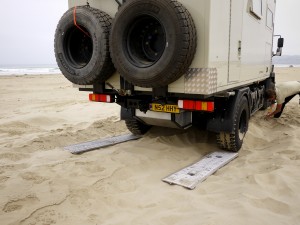 As we were shoveling a pickup truck appeared watching us from a short distance. We chatted the guy for a few minutes -turned out he was the local towing guy who, spotting us, was just waiting for an “easy prey”. He has never seen sand-ladders and had doubts they would work. In about 20 minutes we felt we shovelled and evened the sand out enough to put the sand-ladders down at the rear wheels for good traction. John jumped in, started Burt and gently navigated the beast out in reverse with no problem. The guy couldn’t believe his eyes 🙂 Brownie points for the sand ladders! The whole process with packing the ladders up, took about half an hour and we were on our way.

Next destination is the Big Sur! 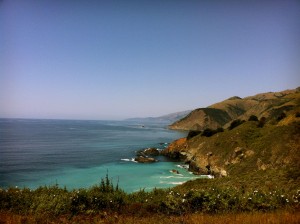 We heard that there are a few campsites in the National Forest and one of them particularly recommended (Kirk’s Creek) As oppose to all the campsites, Kirk’s Creek Camp is located on the Pacific side right on a huge cliff with lush pines and with a view of the ocean where, at the right time of the year you can listen to the Gray Whales’ songs. Sounded great to us. In the early hours of the evening when we arrived to the small campsite, pretty much all the spots were taken except the one that no one wanted 🙁 You know, right at the entrance, wonky ground surface, no ocean view. Although I liked the surroundings with the gorgeous forest, greenness and all and it was quiet. John wasn’t as forgiving as I and grumpily adjusted Burt’s level (as much as he could, the ground was really off!) he hunted for some fire woods and lit the campfire (first time in our travel) I think it was lovely, we had BBQ chicken with simple tasty salad and sat around the fire till bedtime 🙂 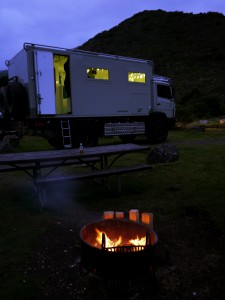 The next morning there still was a slight hangover of John’s grumpiness -for fairness he couldn’t sleep on the tilt but a couple of cups of the good old PG tea put smile on his face. We decided to have a short hike before we set off. There was a trail leading down to the rocky beach where we were rewarded by seeing a pair of mom and calf grey whales passing by. That made up for the wonkiness. 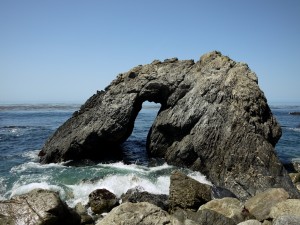