We arrived to Trujillo in the afternoon hours. We read about a couple places to stay here and one appealed to us. It was called Casa Kiwi and we knew that Kiwis have a good reputation around the Globe, besides the description of the place sounded lovely so we headed there. Meanwhile the other, Casa Alemania was advertised everywhere and if you even wanted to you couldn’t miss it. Unfortunately we found Casa Kiwi shut down. As a business, for 2 years now (so that’s it for the updated Lonely Planet book) Not having other choices we headed to Casa Alemania, though we tried one more hotel on the way but that turned out to be a drug laundry-type of business so we ended up not staying there either.

Arriving at Casa Alemania (Note: English people, this does not mean “someone who obsessed with Ale” -which I thought it was at the beginning of my Spanish studies, it only means “Germany” in Spanish) So arriving at the place was slightly underwhelming. (John only agreed to stay here because it had wifi so I can do writing and we can catch up with family and friends on Skype)  The whole place is actually right on the beach and would be very nice if it wasn’t right in-between a stinky chicken farm and dug-up harbour construction. 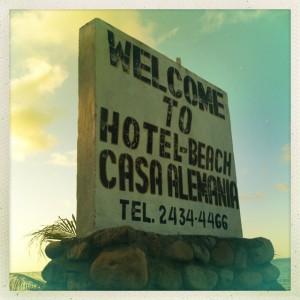 Günter, the host rushed out to order us where we can stay, even before we could check prices, nights of stay etc with him. He already sorted us out. Despite of the peppery price he asks for a night -that is outside of his gated property, it swamped by his laundry room’s water, plus we had to “fight for” electricity and water hook up, and the biggie for me was that the wifi is a bag of poo and doesn’t work. Besides he was in quite a grumpy mood. Hm…

We however met a super great Swedish guy here, Magnus. We spent 3 days with him. He knew his way around here, spoke fluent Honduran and took us to some authentic places around town. Magnus is a Swedish business guy in his early 50’s, very friendly, very relaxed and great fun. He was here to check on his woodlands (he’s in forestry), look for new ones and check up on two of his hotels (he owns around here) We had a great time with him and Johnny spent a couple of days with him going around his land looking for equipments and such. 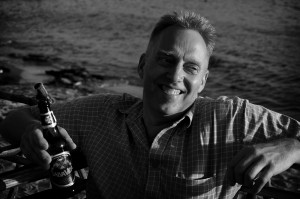 The day before our leaving, John looked around and under Burt and noticed a crack on the chassis.

He let me know and we were crushed. This was caused by a job (couple of bearings or bushes under the middle of the box) we had have made in Mexico which was to cover or support a stupid mistake that our engineer made right at the beginning with the front bush. Without any boring details, we now had actually a serious of problems which involved: The front bush needs to be fixed (though it is a major job and very difficult to get to), fixing the crack itself, and then adding new and much stronger bearings under the middle of the box (but where you gonna have new bearings here??) It wasn’t our finest day. 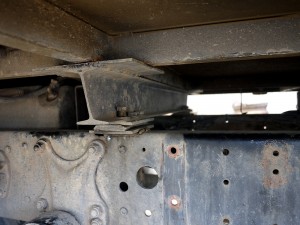 what caused the problem is this crossbar

Have to give it to Günter; when John mentioned our issue Günter knew just the right man for us. The following morning, we hardly finished our second cup of coffee (very important), he brought Jorge and his first man, William aka. “Gordo” to meet us and have a look at the chassis -without having to move the vehicle. Günter insisted coffee and breakfast for all of us, which during we “discussed” (well with my 15 words of Spanish) the possibility, capability and availability of the job. Jorge assured us that they can do the job and could start tomorrow morning at 8AM. 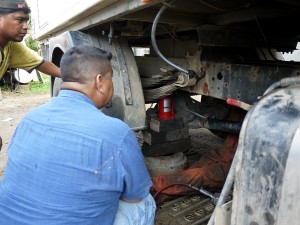 We spent the afternoon in an internet cafe (have I mentioned that the wifi at Casa Alemania was down the loo?) so we were at this cafe, researching solutions for mending cracked a chassis and getting in touch with our friend, Clive, a legendary truck traveller (happened to have an identical truck to Burt) and mentor to John. We got in touch with Clive and he sent us EU/ Mercedes specification drawings to patch up the crack and lots of suggestions for solution.

The next morning we moved in at the workshop. I knew it will take 4-6 days and we will be camping at the workshop so I wasn’t entirely on top of the world. John, on the other hand was quite switched on and Jorge and the guys were willing to cooperate with him. They started the job with lifting the front of the box to work on the front bush first of all. 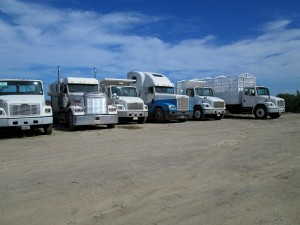 Empresa Transporte Martinez aka. Jorge’s shop has 18 trucks on site and another 15 rented out in for the nearby mine and palm oil companies. He has this large workshop with facilities they need maintaining all 33 trucks. They don’t usually take-in jobs from “outside” but I think they were up for the challenge that was also a breeze of fresh air for a change.

None of these guys spoke English so we were brushing up our Spanish and regardless the language barrier, soon the boys started to clicked with John aka. Juan. The first night was go-out night and we were treated with endless beer, seafood and live mariachi music who were following us from the petrol station to the beach restaurant where we ended up. 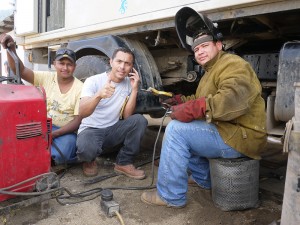 Throughout the 5 days we were treated as respected clients and friends by Jorge and his boys. We got into the routine of making coffee and pancakes in the morning, then getting ice-cold water and coke and ice-cream for everyone in the afternoons. Even the 4 guard dogs warmed up to us and guarded Burt fiercely throughout the nights.

three out of the four

The job was done in 5 days and we decided to go for a test drive to the beach a few hours from here through rough roads which was perfect for the test.

Drove through 10’s of miles long palm plantations by the Caribbean beach till we reached a wonderful deserted beach. There was a couple of km’s long beach with no one around. As the sun was setting fast we decided to stay here. Eventually a lone horse appeared who decided to spend the night between us and the water. 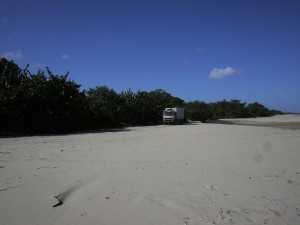 As much as we would’ve loved to stay, we had to head back to Jorge’s workshop as we noticed that the middle bushes -we decided to put in were actually very week and just after the few hours drive they came loose and started wearing out.

So back to the shop. John was a little uneasy returning, first of all because we needed a new, stronger solution and had no idea where we are going to get some, and secondly because you never know what the reaction will be as we return. They might had enough of us…

But far from it. The boys greeted us as old friends and wanted to know the details of the job. We told them that everything else they did (front bush and patch-up work) were perfect, but needed a better solution for the middle bearings. They immediately reorganised their schedule and made Burt’s work priority.

They job started first thing in the morning. After a thorough inspection of the issue everyone had a better understanding and a better idea now. Luckily the shop’s yard was full of old truck parts and after a couple of hours searching the boys found the perfect parts. Then it took one and a half days solid work for 3 guys plus John to change the bearings. 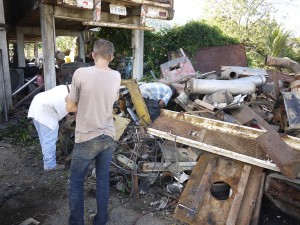 you never know where the next good part is coming from 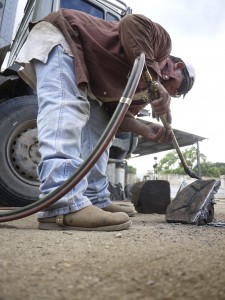 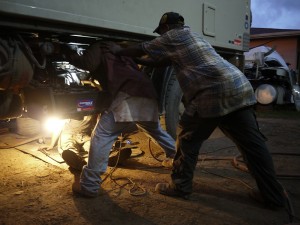 when one man isn’t enough 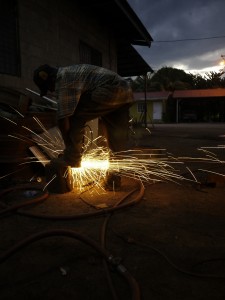 The following day afternoon we were done. They even had a quick look at the breaks and the steering, tightened a few bolts, greased a few things here and there and we were done. We knew this time that we won’t need a test drive.

After a heart-sinking feeling 7 days earlier we had an absolute brilliant experience. Most importantly the war was done as perfect as it is because of the humanity of these guys. They welcomed us and allowed us to be involved where from it was just a matter of a short time to bond friendship. Really, friendship. We are still, and hopefully will be keeping in touch with Hector who we celebrated his birthday, met his family and looked after us throughout our time at Empresa Transporte Martinez. 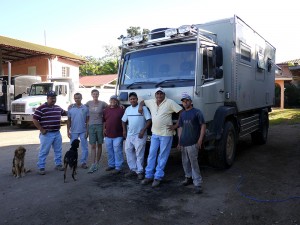 One of our favourite camps…

I would skip this part how we got to Trujillo but during that 360 km (that took us 2 days) we had one of our best boon docking/bush camping place. Between Yoro and Olanchito there’s a quite a dirt road but through a pine forest and I love pine forests. It smells good, it is familiar, it indicates coolness and rain, it’s evergreen. I love it. And it was very wet and rainy. The rain was on and off constantly. We were driving quite slowly by this point and realised we will never make it to Trujillo (not even half way) so by 4PM we were keeping an eye out for possible campsites. This area was clearly a logging forest and there were a lot of mud roads off this main “highway” though most of them fenced and gated off. But eventually found one that looked perfect for us.

In just 5 meters or so, it lead us to a clear area with 3, even muddier, roads to all sorts of directions. After exploring all and serious consideration we decided on one. It was the steepest, muddiest, with ruts that swallows Burt’s wheels but we made it up. to the area we picked.

It was wonderful. Lovely view. Right in the middle of the pines and seemingly no one’s around for miles and miles.

I was nervous, and the first time, I think John was too. Once we were up it was only down in the morning but, man I was praying for a dry night.

But it wasn’t./ Every time it started raining, it poured and it kept me awake thinking “we’re never gonna make it down.

It was only 533 meters to the dry area but it was probably the most challenging one. (I didn’t even have the nerve filming it or take pictures) We had our morning coffees, took a deep breath and went for it. John was brilliant. Very gently, slowly letting Burt’s weight lead the way with slight steering control let us down on this extremely deep muddy, slippery nightmare. I did not take another breath till we were down and from on, it was a piece of cake.