Slowly but surely we were making our way north, visually embracing the spectacular view of the Sur, taking our time for lunch at a great spot and stopping for sea lion watching. So it was, again, the early hours of the evening when we arrived at the campsite where the Airstream rally was held.
A bunch of jolly Airstreamers, including our friends Lianne and Kevin were gathering with glasses of wine and beers in their hands as we pulled up at our given site though it turned out it was too low for us so John and Lianne quickly sorted this out and within a few minutes we finally took our spot for the weekend, right next to Barbie and Bart. 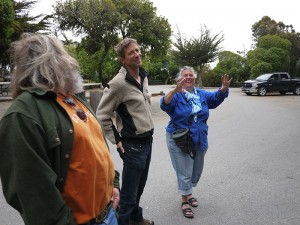 Barbie and Bart is a delightfully eccentric couple from Manolo Park who are very in to generally supporting Earth’s good health in anyway they can. Bart is a steam engineer and Barbie is an art teacher -being very arty herself as well as being an excellent photographer. We had the good fortune to flick through their 3 picture books she made of her photos she took at Burning Man where they are being volunteers for years! (Burning Man festival was one our dream to go to, although we know that it won’t happen as we are here at the wrong time. doh.) They were wonderful neighbours to have, never stopped smiling, joking, laughing or being generous with their wine, beer and lemon supply plus with their complimentary guests’ tickets for the Monterey Aquarium.
We had more friends arrived later that evening; Nick, Desiree and their little boy Scott. Who was a delightful kid quietly sitting and absorbing life and whatever is happening. Everyone, throughout the weekend, was constantly complimenting on the unusually chilled behaviour of Scott’s which I’m sure partly gets from his cool and laid-back parents. 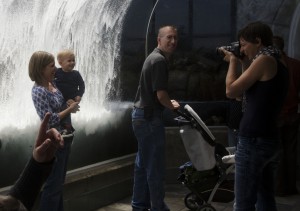 The next morning a few of us decided to hit the Monterey Aquarium. We all squeezed into two cars and off we went. We had a wonderful time. Barbie has been there numerous times so she knew her way, also she proved to be an excellent source of knowledge just about every species in the aquarium. 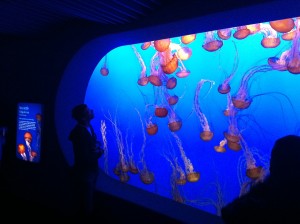 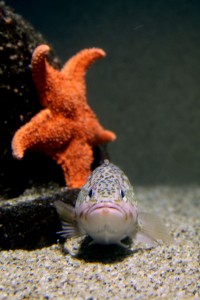 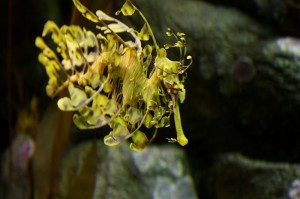 John and I could spent the whole day there and perhaps we took our time way slower than everyone else only just at the end realising that no one had anything to eat yet and it was already 3PM! Being a huge fan of Forrest Gump I was keen to try the Bubba Gump restaurant 🙂 where we were up for a quiz about the film. I think we answered 12/12 at the end. It was fun. 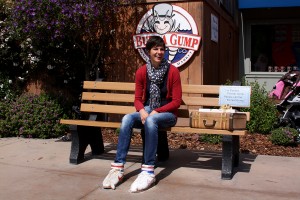 Lianne discovered that there was an English brewery not far from our RV site. This was something everyone was up for! So before we headed back home for the Airstream evening gathering we thought we could swing by for a couple of pints of homemade ale.
Feeling jolly after the our “tasters”, we got back to the gathering meeting more delightful people which is exactly the receipt for an excellent evening.
We were mostly chilling the next day. I enjoyed the free wifi so could catch up sorting and uploading photos, stories and so on. Johnny was enjoying a potter-around Burt. Then we were invited for a sea otter and sea lion watching by Barbie and Bart. Took some nice pictures, had a few good laughs, bought fresh artichokes and strawberries. 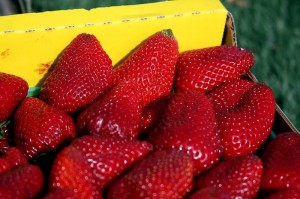 Then we returned to the site for the main event of the weekend which was the potluck (I made Italian bolognese earlier) This was a slightly quieter but very nice, chatty evening.
Lianne and Kevin have been wonderful to invite us, not only here but into their lives and introduce us to their friends. They were, as always have been, generous with their time, kindness and their delicious homemade ale that we had the good fortune enjoying many times throughout our time together. We were sad to say goodbye to them after a (short yet) long relationship with them. They are the true and living proof of the fact that no matter what, you can deeply enjoy every minute of life. And they really can. 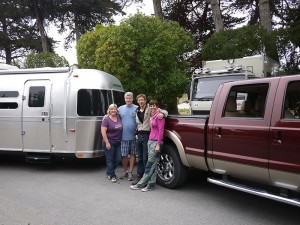 Lianne and Kevin with us and with the rigs.

As the rally ended on Sunday, our good friends and new-made friends were packing up for their journey home. Some needed to leave early morning for a longer trip, and some had time to enjoy a few more hours in the day. But eventually by the early hours of the afternoon we said goodbye to the last people standing; Barbie and Bart and we left to find our next camp spot. 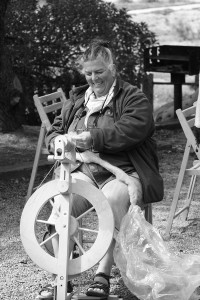 Next The Sequoia National Park.