It’s been AaaaaaRges since my last post so I’m just going to jump right into it. 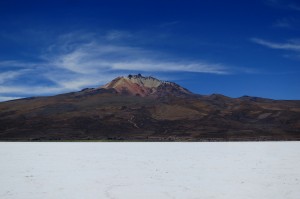 So, Bolivia…. For Johnny’s regret we had to compromise to only visit the south-west part of Bolivia and for only 2-3 weeks as time was rushing us to catch the Brit family for Christmas in Argentina. Which was absolutely fine by me as it involved the Uyuni Salt Flat, the place and a picture of it that instigated this whole Americas travel back in England 3-4 years ago. The Salar was a MUST visit place for me.

Our 3 weeks visit included lots and lots of salt, wind, desert, llamas, vicuñas and alpacas and it lacked in seeing people.

Once we crossed the border at Pisiga Bolivar we headed to the Coipasa saltflat with a little help from the local military laughing boys. One of them jumped in to a jeep and lead us through the first part of the desert, for about an hour to the edge of the Coipasa salt flat where he set our biological compass (i.e. our eyesight) towards a pointy peaked mountain in the distance to follow that for a day or two then once we reached it find and ask someone for further direction.

So we were set free on the salt flat and headed where we were told to. The salt felt wet and mushy and were lots of dugouts, and it was a little scary as all horror stories we heard about being stuck on the salt were flooding back in our minds. Though it was really nice and felt quite spooky with the whiteness and setting sun.

We travelled a couple of days through the arid, epic desert with howling wind and burning sun at around 3000m above sea level. No wonder we didn’t see anyone except alpacas and llamas. 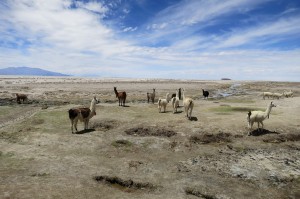 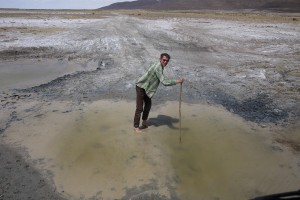 The tire tracks we were following kept disappearing so we were pushing through the sand blindly guessing our direction. We kept it cool as we knew we have enough water and food for a few days, in case we would get lost.

At the end of the second day we found ourselves at the edge of the famous Salar de Uyuni. Where we were welcomed by an impressive looking volcano, Vulcan Tunupa. We spent a couple of nights here and climbed on the top of it where we had the first class view of the Salar. 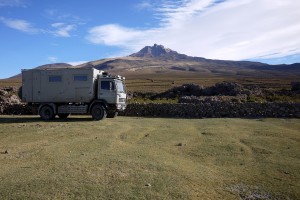 Salar De Uyuni is the world’s largest salt flat with over 12.000 sq km flat, blinding-white surface, sitting at almost 3700m. The mightiest nothingness imaginable. If you stand in the middle, all you can see is the blue sky and white ground with blurred horizon. If the wind wasn’t blowing you could spook-out of the lifelessness of it all. Quite and extraordinary place.

And finally it was the day of the driving through the saltflat. We investigated the conditions of the salt and after asking a few locals in the small village of Coqueza and a couple of guides who were just arrived from the saltflat we decided it’s good to go for us. 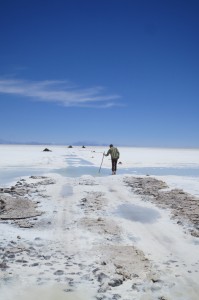 We pushed through the entrance -it was covered with water which didn’t look very promising at first but then we were on the track that was leading to Isla Inchuasi which is the more touristy island on the flat. For 15 minutes we stopped and walked around. To me it was somewhat comforting to see other people. I don’t know, maybe the over 10 days drive in remote, otherworldy places, practically without seeing another human being, then driving in the endless whiteness spooked me out a little. So it was nice to see goofy youngsters wearing signature Bolivian colourful woolly hats taking fun photos on the salt.

Then we peeled off and headed into the nowhere on the salt. Boy, sometimes when you have the infinity of parking place, you just don’t know where to park and which angle and direction…. so weird. At the end we managed to just stop the engine and wait where the vehicle ends up stopping and that was our spot for the night.

I imagined this moment before… camping on the saltflat, drinking a cocktail, enjoying the sunset and the stars… So much that I even dug out the horrible cheap rum we bought in Venezuela and fixed an un-drinkable bad BAD rum-hibiscus “cocktail” and took out the camping chairs and forced myself to sit outside to enjoy my awful mix. It was so windy that my chair was moving, me sitting on it! then the glass and bottles were flying all over the place and were freezing our arses off. SO sat inside and watched the stars through the salt-covered windows. 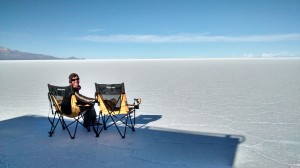 It was still an experience. It was MY saltflat experience and I loved it, even that I didn’t, and it was uncomfortable and cold, and sitting on the salt made our pants wet and stinging the skin. But it was all good. And we took the MUST HAVE “John small BURT BIG” or “me leaning on small Burt” photos. Because this is one of the few places where you can do that and I wasn’t going anywhere till we had some of those! 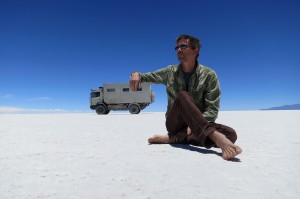 So after the salt, i think we had enough in the past 10 days-2 weeks of it. So needed a good wash. I don’t know how, but every traveller (been to Uyuni) told us that the town is full of car/truck wash places. We hardly found the one who scheduled us for the next morning coz he was super busy washing real working trucks and cars, so the playful tourists will come last.

We spent the night in the even spookier (John loved it) train cemetery just outside of town. 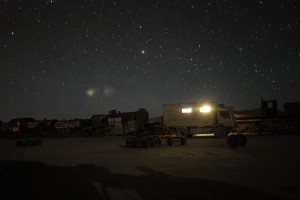 Burt got a good scrub the next day then we scooted off south towards the national park of the coloured lakes. 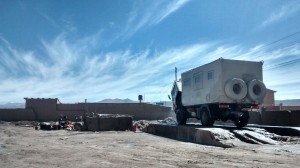 Absolutely stunning drive! Reserva Eduardo Avora is a real overlanders playground of ever-changing scenery, colourful hills, rocks, lakes, flamingos, vicuñas, foxes and other high-desert animals. We took it slow, took the desert tracks and took our time to get through it trying to enjoy this tremendous place that certainly did not look or feel like any place on Earth. 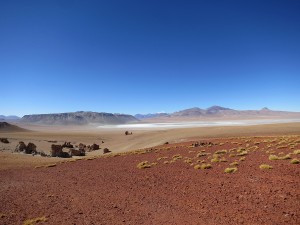 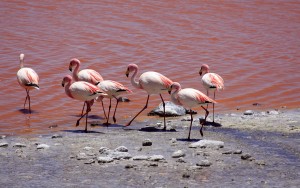 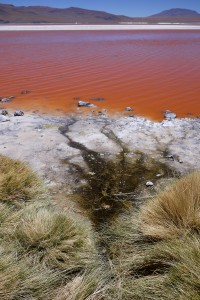 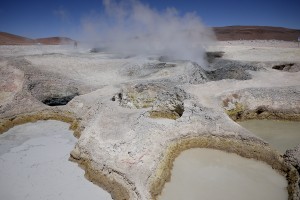 In a few days we arrived to our exit of Bolivia. We were ready to warm up in lower elevations and actually, well…. breath properly for the first time in 2 weeks so was looking forward to get to Argentina.