It took a few days to get to Cusco mainly because we weren’t in a hurry. On our way, in sequence we had a chance for a walk in the Amazon which was gorgeous. Then visited a local hot bath (baňo termales) which was basically a small concrete room with two small pools with half the village (most of the women practically fully dressed) soaking in them. The experience was amusing with the speakers blasting some noise which meant to be the radio but it wasn’t tuned precisely so had that cracking white-noise with the local No.1 piece in 150 decibel. Parked up at beautiful rivers and finally started elevating on to the Andes. As we were approaching Cusco there were archaeological sites to visit. Some of them small and some of them major but all was worth the visit. As we didn’t plan to visit Machu Picchu we wanted to be sure we see a few sites as they are fascinating. 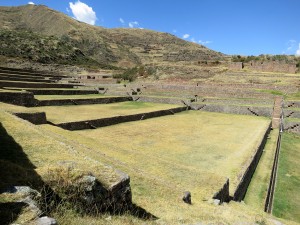 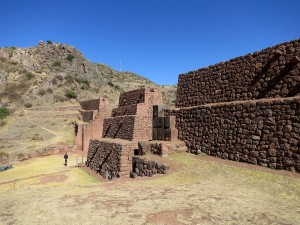 At one of these smaller sites we bumped in to an overlander bus with the 2 British drivers and 12 passengers. John and I had a great talk mainly with the drivers. They gave us a great tip where to service our truck in Cusco so we put that under our belts as we haven’t serviced Burt since we left and that was 50 something thousands km ago.

On our arrival in Cusco, we visited this Mercedes workshop (they service all the overlanders’ buses and have great experience with Mercedes) John had a long talk-through with Nilo, the manager and main mechanic about what would be to be done then exchanged emails so he can send us the list, price and date when we can roll in for a few days.

After this we headed to the other side of the city up the hill to the legendary overlanders campsite Quinta Lala. Of course there’s an outskirt road to get to the campground -a few k’s longer but perfectly fine for bigger rigs, but we listened to another traveller’s warning “to ignore the gps” and followed his instructions. So we were led through the colonial centre!! -I grew a few more grey hairs. (this usually my nightmare, John is so brilliantly calm and has no problem squeezing Burt through keyholes) Anyhow, we arrived at Quinta Lala a campground run by a local young couple who are very sweet and helpful.

For my biggest joy, there were already 5 vehicles parked up and the atmosphere was brilliant. We missed other travellers’ company which we didn’t have since Colombia and that was 3 long months ago. And personally I, was craving for conversations over a glass of wine, making new friendships and so on.

While John was parking up at our chosen spot I dived myself in to the cloud of laughter in front of the Mercedes bus that was parking at the prime spot of the ground and was decorated with lovely colourful signs. It was owned by a Moroccan family (3 kids btw yrs 8-10) who are travelling from Argentina to Canada with the purpose of spreading love, visiting schools, giving out gifts and good vibe. Morocco, truly couldn’t have better ambassadors than this family.

I fell in love with them straight away. As I walked up, Kika -the mum hugged me, gave me kisses on the two cheeks as greeting a long-seen friend and we were unseparatable. Anouar, the head of the family (and clearly, heart of the campground) welcomed me with a huge hug and said that EVERYONE here, including the hosts, their dogs and chickens, and all other travellers are SO LOVELY! (later I found how one of the Truth of life’s becomes alive in front of my eyes, as this family treated everyone around them with nothing but kindness and all they got for return was smiles, laughter, handshakes and free gifts on the market!) At this point the children were hiding but all others gathered and the whisky and wine bottles got opened. Despite the near-freezing temperature in the evening we were all out talking and laughing till very late. Oh, how much I missed a socialising event!

The next 5 days some left, the Moroccans meant to leave every day but instead the daily party scene continued. John and Anouar bonded over the solar system. We did some shopping, sightseeing in town -mainly meant visiting the Irish Pub, and made the decision that we’d go and visit the Sacred Valley for a few days then return to Nilo’s workshop for the Burt’s service. 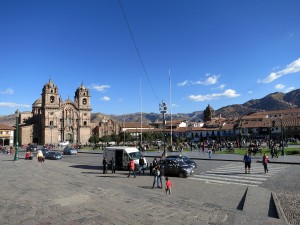 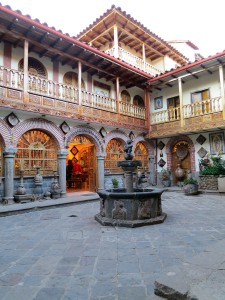 So eventually, we said our heartfelt goodbyes to everyone and left for visiting all the Inca sites along the valley.

The Valley is beautiful! So much to see and do therefore a bit touristy but we had a chance at one point to hire a guide and explain all this strange behaviour with the terracing and circles and all. But he couldn’t. Everyone is just guessing what might things mean but no one knows for sure so we just enjoyed the look of these magnificent creations and salt pools and sacred sites and temples. A tangible thing I did, was to partake in a chocolate making course which was thoroughly great fun. 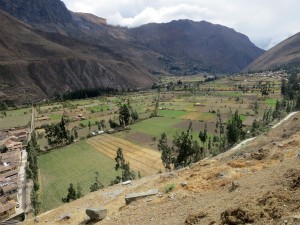 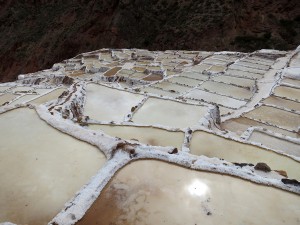 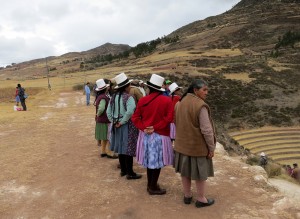 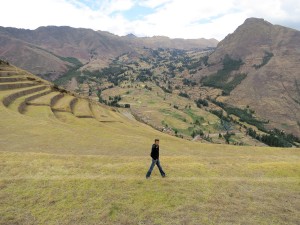 In about 4 days we saw everything we wanted and, as the Valley is a One Way street, we turned back and headed to Cusco to Nilo’s shop. W e arrived on a Sunday evening so had a chance to park up at the right spot and be ready for the work for Monday.

The following day morning, Johnny was out early meeting and briefing the guys, and I was setting up the laptop for writing and photo editing when I spotted something familiar in the window … it was the Moroccan bus!! I couldn’t believe my eyes! Found out there were here as had a problem with their gear box. Looks like we’ll have a few more days together. I got used to staying in workshops but this having friends around made so much more fun. 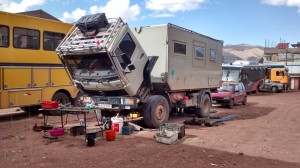 Especially that I spent my days with Kika and the kids in town, having lunches, coffees and hang out in the market. The family speaks French, Spanish, Moroccan and Arabic and English absolutely fluently and I’m sure there are a few more languages there they don’t tell us. So hanging out with Kika and the children was fabulous as they have the most adorable personality to engage anyone on the market or on the street. It was so nice learning from Kika. We had our personal juice making lady on the market, who was expecting us every day for an orange-mango and 4 more juices and for a good chat.

It took 6 days to finish the work, funnily enough same for the family so on the following Saturday evening both vehicles left the shop and headed to the campground. Quite late but arrived and found a few familiar faces there plus a few new ones.

We had a couple of days catch up on emails and do last minute shopping then finally left Cusco. Same day as the family. We were heading the same direction for the first 200 or km and told each other where we were heading and left it there. (hoping somehow…. we’ll meet again)

Johnny and I had a few last thing to sort out before we left which was quite late in the afternoon and somehow we got caught in the twisty, narrow roads of Cusco on our way out and, about 100k outside of Cusco we also got caught at a road work waiting 50 minutes to get through.

It was dark when we were let drive through and decided to just get to our waypoint -a hot spring, also because Kika’s waypoint didn’t make sense. It was about 7PM when we arrived at the hot spring and guess who were there! The Moroccans. The way down here was about a 3 km steep, narrow and bumpy dirt road and on our way Johnny and I said “ah, they won’t be here, it’s way too bumpy for their vehicle”…. but they were here! Screaming with joy shoot out of their bus to greet us, yet again.

So we had a few more hours with our new friends. So lovely. The kids we adorable as always. Had a last dip in the morning (the water wasn’t at all hot, only warm -caused by an earthquake a few years back that partially closed down the source of the spring) The Moroccans and us drove out together for our final goodbye… As if I lost one of my arms, I felt when we left. But they have different schedules and we wanted to stay on the mountains so that’s how life is on the road… But the connection stays and we will be in touch with them. Who knows, we might ship back though Morocco. 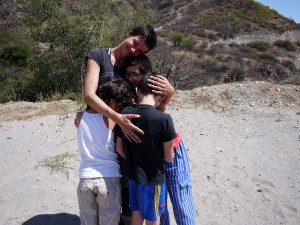 Next, the highlands of Peru…