With saying goodbyes to the Moroccan family our journey continued on the highlands of Peru. Some roads have been improved and despite the twisty nature of driving through mountains it was fast and very enjoyable. (Though we found Peruvian drivers terrible which is sometimes quite amusing watching how they solve a simple traffic jam situation in 20 minutes)

Our trip from the hot spring  began on the winy PE30A highway towards Abancay where we took a right turn which was the longer, twistier dirt road through absolutely breathtaking scenery and at the end of the day we arrived at the lake (Laguna Pacucha) and stayed at the nearby archaeological site (Sondor, one of our favourite) A site bedded in the valley, pyramid on the top of a hill with a view of the lake and the nearby mountains. It was just stunning.

From here we headed to Ayacucho but the road was so slow we stopped by a river for overnight before we got to the city. Our book recommended a stop at this town but we only had a chance to park up with Johnny staying in the truck while I do shopping on the market and we headed out of the busy town to another archaeological site (Wari) for the night. Also a lovely site, not so much ruin to see but has a museum, a sacred cave and lovely, long foot paths all over amongst the cacti which was perfect for a morning stroll before we headed off.

One of our plans was to drive through the “highest passable road” (5056m) which was a fair distance from here and we chose the less obvious route…. just one of those decisions. However this road was dusty, really narrow at places and climbed up to impossible mountains it was very beautiful. We arrived to Lircay, the town we needed to turn off towards the wilderness. It was getting dark and we wanted to be reach the more remote area for our night stop. It was dark when we found ourselves a nice spot next to a small river though it was difficult to see what was around we parked up and put the heating on. We were at 4700m and the temperature was below freezing.

The morning we woke to the most gorgeous scenery with llama herds spreading themselves out on the pastures, keeping safe distance from herd to herd. When finally we got our selves ready in the morning we got lost 3 times (only 10-15km each time) as a result of the lack of signposts in the wilderness highland, but by about 11AM finally we found the right “road” (more like tracks) that leads us to Huachocolpa first then to the high pass.

For this we had to drive through a mine so had to check in at the gate where the very friendly man reassured us that this is the right road and was saying other things which we didn’t understand but it was all jolly and nice. He wished us good travels and let us thorough. Within 15-20kms we saw a line of vehicles on the side of the road and a man waving at us. What we could gather was that it is some kind of a fiesta and for about an hour or two we can’t pass through. But said we could drive on a bit to be closer and if we wanted, take photos. So we drove pass about 10 or 15 trucks and cars when we completely got stuck. Almost literally wedged ourselves in-between two vehicles (1-1 cm each side) We almost squeezed through when several men rushed towards us and said that we cannot drive through and instead we should leave the truck where it is and come and join them. We tried to say that is fine but if they just let us pass here we could park up 8 meters on (where we would be in the clear and leave later with no problem) but they insisted to leave the truck right at this point and come in with them. So after we squeezed ourselves out of the cab we joint them.

We were  lead up to a group of people sitting in a field  with a small altar with flowers and offerings in the middle. The men were sitting on the left of the altar and women to the right. First they asked John and I to bow at the altar then they sat us separately. (me with the ladies and John with the men) 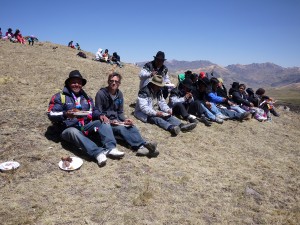 At this point I understand as much as Oswald, the men looking after us, said. This was the annual festival of the “Vicuňa”.  Vicuňa is a llama-like, or long relative of the llama, wild animal. They are very rare and only lives on this, or above elevation (which was over 4700m) They have extremely valuable fur. Once a year the village (Huachocolpa) walks over the hills to gather Vicuňa herds.  They walk holding a banner and slowly they gather the animals in to a round fenced area.

Now we understood why we couldn’t drive through. While we were sitting there we were given coc leaves that we had to chew with our hosts, then we were given shots, lots of shots of cane vodka, then fed with huge bowls of soups and boiled potato with roast alpaca meat that was so tough that it was impossible to chew it. It wasn’t 11AM yet but we were tipsy from the shots and I kind of had the feeling we were not going anywhere for a while. In return, we gave them (or offered to the altar) a few bottles of Tequila and rum and dark chocolate which they appreciated very much.

Then Oswald walked us up to the top of the hill where from we could see the villagers arriving over the hills in the distance with a couple of hundreds of Vicuňas looking for gaps where they could sneak through. But the bond was tight and eventually the people gently herded the animals into the closure.

After this there was a lot of movement and introductions and more food and the cervesas came out. However the Elders, Oswald and us were going down to the field where the closure was. They set up the altar again, seated us in the same order as before and there were some short speeches from several members of the village Elders. Here we were very close to the animals who seemed frightened and were desperate to find a way out. It was heartbreaking to see this but the people tried to make this ceremony as fast and human as possible -I guess.

After the speeches, they choose a young female and male to perform a “wedding ceremony” with them. There was some blessing involved and some blood drawing (I think they cut their ears a bit) too but all together they were fine and let free as soon as this was over. I wasn’t sure I liked to see the poor animals held down like that, I believe John felt the same way.

And there we were as the VIP of the group, and we were one of the first ones being painted on the face with blood. Nothing you can do to avoid this so we just had to go with it. 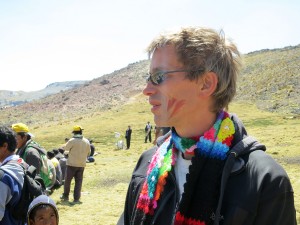 After all this there were more coca leaves chewing with some horrid grey bit that looked and felt like a chunk of play dough but tasted absolutely revolting. Then more vodka, and the tequila and rum opened too. After a while it was OK for us to peel off  and go close to the animals. They were setting up for the trimming. There were a few official people from the llama/ Vicuňa society or something who were supervising the trimming project. So people went in to the closure and grabbed one (two guys for one animal), brought it out and the official people checked and decided if it is appropriate to trim or has to be let go. Many was let go free and some let through for the trimming which only took a few minutes then they were let back to the wild too. Poor things, were pretty shocked, and chilly desperately looking for the rest of the herd. But we saw many reunited and soon, as more and more was let back to the fields.

John and I were fascinated and watched for a long while. Then we decided that it might be time for say thank you and goodbye to our hosts and make an attempt to leave. So we walked back to the Elders. By now the music started and the cerveza was flooding so I thought to myself that this is definitely the time to leave. We said our goodbyes, it was very long and they were trying to get us in to the dance circle and many many people rushing up to us to have their photos taken with us.

So it took a long while until we were free to go and walked back to the road where, by now there were several cars and small truck blocking the way in every directions. People were tipsy and jolly and trying to have a conversation with us speaking the mixed language of the local dialect and Spanish.  By now we were so ready to leave so while I was holding the front of conversations John was trying to find the “escape” route for us. Long story short, there was absolutely no way we could drive out ahead so Johnny  decided that we were going to back out all the way that only involved moving 3 cars. Finding the drivers of these vehicles was another mission. Everyone was tipsy or drunk, shouting and laughing and talking to us at the same time, and when they said something then everyone burst into laughing meanwhile John jumped in and started up Burt that was coughing black and grey smoke while the engine was warming up.

I found (the/some) moderately  drunk drivers and directed them which way to move the vehicles to free John’s way at the back. They were shocking! A simple reversing manoeuvre took 10 minutes and they clearly seemed confused so this had to be coordinated by me or the only sober guy who was very helpful. Once the road was relatively clear behind us John carefully drove the approx 100m long way with trucks, cars, motorbikes on one side and a gutter on the other leaving about 2.6 meters to our 2.4 m wide vehicle, and leaving the jolly shouting, laughing crowd behind us.

When we were clear and turned around I jumped in and said something very un-lady-like and we both burst into a desperate laugh. We were in an ecstatic state but very glad we that we were invited, had this experience and got out of it by now.  We drove back out through the gate of the mine where, now we understood what the guy was telling us earlier….

We didn’t realised how late it was in the day but we had two options. We ether stay here again or drive on the dirt road through the mountains (that none of our maps had marked) hoping that it will come out to the main road we need to be on. We agreed to move on (staying one more night on 4700 m wasn’t something any of us wanted). A couple of hours bumpy ride later we came out on the road where we expected only to realise this was the road we could’ve taken 2 days ago and only would’ve taken a few hours to get where we wanted. 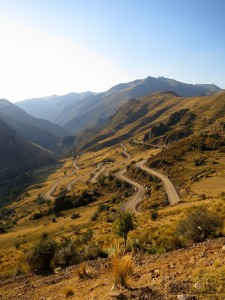 But hey, this is driving in your own vehicle about. Besides we would’ve not experience the festival  if we drive down the easy route, so sometimes it is good to take the road “less travelled”