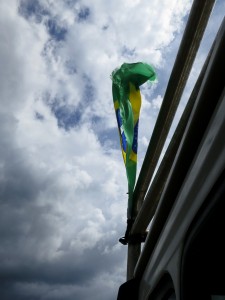 After we packed up with the essentials (3x wheels of Italian cheese, 6kg each, 10×24 Venezuelan beer, a few bottles of cheap rum and vodka and of course cheap fuel) we headed back to Brazil and were making our way south to Manaus.

It took 3 easy days to drive down that involved stopping by the equator line and take some photos. According to Samantha, our GPS, the monument isn’t quite on the 0.000000 spot but 4 steps south.

Then we drove through an Amerindian reserve which is basically the road BR 174 that leads through the Amazon rainforest, though is very strict -no parking anywhere, anytime, no stopping at all -not even for a sneaky pee, no photographs and so on.

On the other side of the reserve we stopped for the night at a family restaurant and bumped in to a couple (French-Spanish) overland cyclists. That is super hardcore travelling in my opinion. They were a super jolly couple and were heading north (from here to Venezuela, then to Colombia where they lived) They heard about the Amerindian reserve as well, so they decided to hitchhike through the 120-ish km stretch. 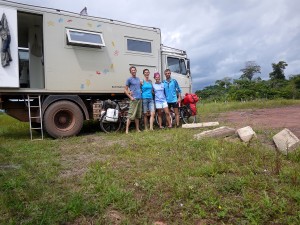 From here, the next day we headed to Manaus.

Manaus is a huge port city in the Amazon. From here there are no roads and all consuming happens by shipping to the rest of the country. That makes everything quite expensive in town.

Actually there is one road, B319 that leads about 800km south to Porto Velho. This road is legendary for a couple of reasons;
A. it is the only overland connection from the south to the north and leads through the rainforest. There’s an ongoing battle between the government, locals, the forestry industry and environmentalists that involves road and bridge improvement-budget that keeps getting lost….
B. about 4-5 years ago there was a couple overland travellers with a similar vehicle as BURT who fell through one of the bridges.

John and I, for years talking about the BR319 that it would be great to drive down on it. We knew we aren’t suitable -at least what we knew of the condition was 4-5 year ago. Though coming to Manaus for us was clearly for shipping.

For a port town it was quiet tricky to figure out where the ports are. Interestingly enough. Although you cannot just wonder lost on the streets of Manaus without people walking up to you, asking politely “can I help you?” or “are you lost? How can we help” and so on. I had a good feeling about Brazilians in the past few days and when we got to the city, people were even more helpful and friendly.

One of these helpful people, Carlos called his daughter -who spoke English to come over and help us. Carlos also called his mate at a port to help us with the shipping. When it was finally clear to him that we are travellers and what we are doing he was surprised that we are not DRIVING from Manaus to Porto Velho. He said we have time so can take it easy and just drive south on BR319. He was so sure that we would be OK…..

From that moment John and I decided to do a little research. We visited the municipal police, the military, the Federal Police, we met truck drivers who knew the road and even met an Argentinean family who just drove up from Porto Velho on BR319 so we asked about the conditions of the road and bridges. The police and military said the road and the bridges were improved, all bridges classified up to 30 tons but there are part of the road that difficult to pass in the rainy season. So we thought we give it a try.

Long story short, it took 2 days to get to the first difficult part of the road (very muddy, deep and slippery surface) where we stuck but got ourselves out of it by the end of the day and stayed the night. Overnight there was one 2 wheel drive car tried to pass and stuck right next to us. It was midnight by the time we got them out of the mud. 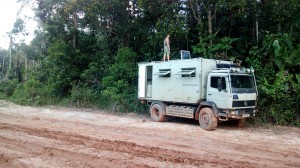 The following morning we were having second thoughts but still excited to be on the road and have the chance that we might be able to drive all the way, even if it takes a week…. Then at around 7AM two cars arrived from the south -heading to Manaus. When we asked about the conditions further south they just shook their heads and said that we would not pass with our vehicle. Hm. Of course we couldn’t ignore this guy who was very certain that we wouldn’t make it.

It has been raining all night that made the surface of the road extremely slippery and deep muddy. The locals know the routine; wait 4-5 hours till it dries enough to drive through so that’s what we all did. I was supplying water, coffee and tea for everyone. By midday the first car gave it a go. With our sand ladders and shovel and everyone’s help of pushing (except the girls. Women just stay in the car and wait till the men get them out of there!) Not me. I was up there digging and pushing but eventually they made it out. Then the second car drove through too with a few little bumps but also made it. 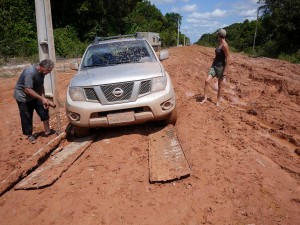 By this point Johnny and I decided to turn back. John wasn’t entirely happy but you just have to listen to the voice inside. We waited a couple of more hours then packed up and planned our escape route through the deep watery and muddy ruts. By then there was one more vehicle but he was having trouble getting through so the driver decided to wait few more hours till the surface is drier.

We planned our rout and John gave it a go. We slipped in to a deep rut and the digging began. It was 36C, humid and no shade. We were up to our thighs in the water and mud. The car driver were just standing over us and tried to have a chit-chat while we were lying under the truck trying to free the difs with our bare hands, shovelling the heavy sticky clay, collecting gravel and so on. It took the whole afternoon shovelling, positioning the sand ladders, clearing the difs then John trying to get a grip. The quality of the mud was this slippery, slimy stuff so we were getting deeper and deeper every time we tried. We did this about 6 times and I was on the point losing my belief that we will ever get out of here. 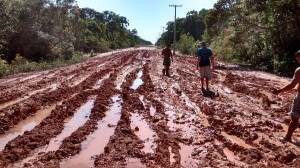 We just set ourselves up for another try when a bunch of adventure travellers arrived from Argentina with their Toyota pickups and their winches. They whizzed by us swiftly then stopped to help. I think they were quite up for the challenge (or fun)

They positioned one pickup in front of Burt hooked up and for the first try we were out! Just needed that one little pull (or push, which I tried before on my own -which is ridiculous, without the help of the smiley car driver who wasn’t about to get his hands dirty) But we were out. 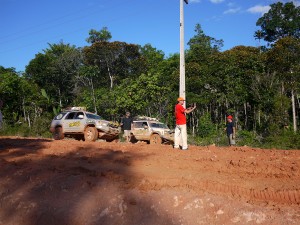 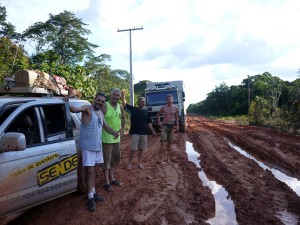 That was the day after Germany beat Argentina on the World Cup final and these Argentineans -first thought we were Germans, without a question , without even a blink willingly helped us, hugging us when we succeeded. They learned we were from the UK but that didn’t make any difference. We exchanged stickers took some victory photos and wished good luck to each other then they left.

We still had a hundred meters to go at this very difficult part but we were in a better position and had a reasonably dry route ahead of us. With a bit of an edge but made it through. It was getting dark by then. We wanted to get through this tricky part which was about an 8 km stretch. We didn’t want to risk another rainy night so while it was drier we pushed on. Finally form, where we knew the road improves we tucked ourselves away, cleaned up and had an early night. we were exhausted.

Once back in Manaus, we found several shipping companies. Many don’t allow passengers or women on the barge -only the truck and driver. We didn’t want to split so kept looking. Finally there was a company where we found a guy who helped us. We had to sneak on at 9PM that night but we both could be on board with Burt, plus they organized that they cook for us 3x a day too. Actually they were very helpful and very very nice people.

The barge only had 12 container, us and another truck with a driver on. The small tug boat had a crew of 4 pilots, 2 mechanics and a cooking lady. Once we were set, off we went for our 8 days cruise down the Amazon. 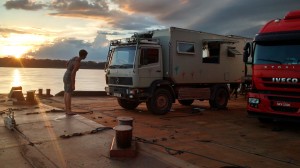 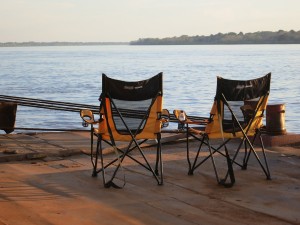 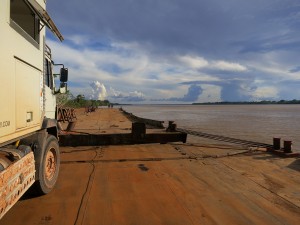 It was actually lovely. Our fellow passenger truck driver, Mesena was a sweetie. Spoke Spanish so could communicate fairly easily. The crew was very nice and we shared dinnertime together. Every day villagers from the bank of the river came up to our barge to sell fruit, veg and fresh fish so that what we were having for dinners. It was extremely hot and at a certain time of the day for 2 hours there were an amazing amount of mosquitoes but we managed to have a nice relaxing time for 8 days. We had wonderful sunsets and river dolphins followed us all the way.

So at the end we made it to Porto Velho. I am glad we tried BR319. We were close but at the end we had to admit, the road and the bridges are not good. It is not for large and heavy vehicles.

We were in Porto Velho. Mesena lead us to a truck stop where we could fill up with water and get a little fix done, as he recommended this place as very good. Once all was done we were heading out of town.