John and I crossed the border at San Ignacio with no problem, all went smoothly so it only took 2 hours. We headed up north to Copán near the Guatemalan border.

The paved road was in a much worse condition and it was more winding than thought so it took over 5 hours to get there before dark. We found our place to park up for the night, opposite the Copán archaeological site and only a few minutes walk to Copán the town. After the long day, we felt like treating ourselves with a few beers and pizza in town.

The next day we visited the site which was great and it was very nice to see one more ancient Mayan city before we leave this area and there will be no more. On the site there was also a Mayan medicine trail which we really enjoyed walking through as the finish of our few hours visit here. 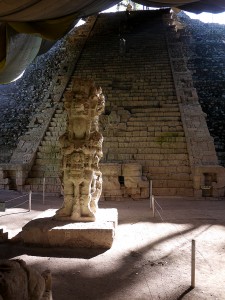 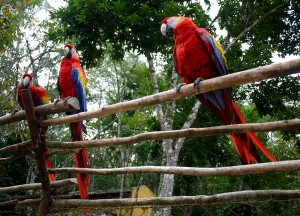 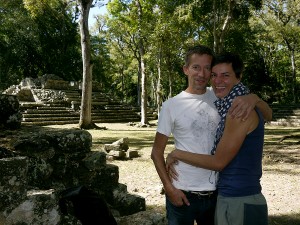 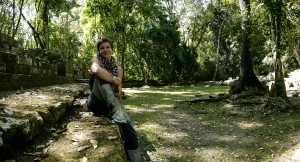 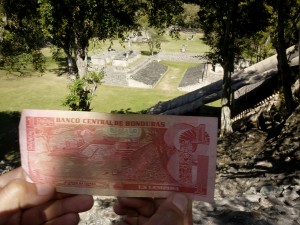 Sort of needed to hurry up as we wanted to get to a hot spring in the hills and it was apparently through a difficult road + needed to do some shopping for essentials.

Eventually we got to this hot spring/natural spa only to find that it was a tourist trap and it would’ve cost us a fortune to stay there for the night (on their dirt car park), besides it was run down and the welcome had a hint of “can’t be bothered” attitude. The price would’ve been 800 lempira ($40). This was slightly frustrating, we were very much looking forward to soak in hot spring water. But you see the problem with these tourist traps is that they have a hugely unreasonable set price, they not up for negotiating and above all, we find them unfriendly, fed up with tourists. So it would be wrong to support these places. Actually -never let a lie get in the way of a true story; they did drop the price by 50 lempira (so it would’ve been 750lmp) but that way we were only allowed to use their horrible dirty pool in the back garden, instead of the further 3 or 4 natural pools in the hill side with a view.

This was very disappointing and now we didn’t know where to go, it was getting late and it was another hour or so drive back on this unpleasant road to Copán. No choice so we started driving back then in about a 100 meters from the “Trap” we saw a private land next to the river with a few houses and a swimming pool (which we guessed was hot water pool as this area is full of them) So I asked John to stop and I jumped out to ask the owner of the land if it would OK to park up. He was happy to have us and showed us where we could park up comfortably. This was right between the pool and the cold water river and he invited us to use the pool -that was fed by the hot spring water from the top of the hill as much as we wanted. We offered to pay for the camp and he was happy to take 100 lempiras. 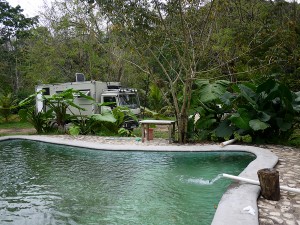 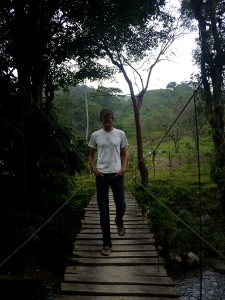 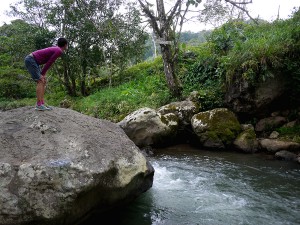 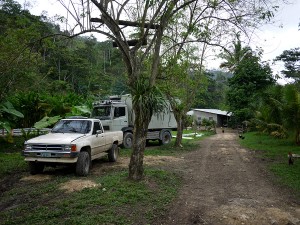 It was actually such a nice experience. This patch of land next to river had a few cars parked as well. We found out that the cars belonged to the workers of the coffee farm up the hill. They drive to here in the mornings leave their cars and walk over the bridge and up the hill for the day. We were about to cook dinner and open a couple of cool beers when they were getting back down the hill at the end of their day. They were so surprised to see Burt and us. Very curious, they gathered around the vehicle and peeking in the doorway. Particularly one lady was so fascinated by us. Me sitting at the doorway, Johnny cooking but peering over my shoulder, we offered her and the young men gathering around her beer and had small-talks -as much as my Spanish let us, but in situations like this understanding one another is no problem. One guys spoke a couple of words of English and was so happy to say these words and get a response from us. They were so friendly and nice. Then the horses arrived from the hills with the day’s harvest and they got the sacks of their back, loaded the couple of pickups and left. Johnny and I decided to have a plunge in the hot spring after dinner. It was dark by then and just as we got our swimming suits on and hopped out of Burt we (couldn’t see but) heard that someone just jumped into the water. Feeling a bit shy, we were there already so went ahead. It was the wife of our host, who was also a coffee farm worker and was having her daily bath. It was dark, so couldn’t see well, but she must’ve been in her early 50’s. A very nice lady who, despite the darkness, the two strangers, the language barrier and despite the fact that she was naked she was so happy to chat to us. For her all this was just natural and part of everyday life, and somehow these two skinny aliens are in her pool I thought she might feel awkward or intimidated but she couldn’t be more relaxed and friendlier.

In the morning we asked our host if it was OK to promote his place for other travellers. He was very happy for that. Now this place is worth driving up here.

We left shortly after breakfast. First headed to the border (Guatemalan) to change the 1700 quetzales -which is the Guatemalan currency, we found tucked in to one of Johnny’s trainers the other day. At the border there are plenty of money-changers and we got a reasonable rate which was good. Then we had to drive through Copán again then back on the road we came on a couple of days ago. We bumped into 2 couples overland travellers from Switzerland and Germany and after a quick chat we headed in to the Midlands, cross-country to get to the big lake, Lago Yojoa.