I admit, I do get in to a stinking mood sometimes, not often but I do. Just grumpy, tired not up for things certainly not up for challenges. And this was one of those days. We knew it was going to be a long day. We knew we needed to change the cash at the border, we needed to stop at a bigger town to hunt for the inflator part we didn’t find in El Salvador, and I knew it will be a good old bumpy ride for the second half of the day.

We arrived at a bigger town, Santa Rosa. A good old, sweaty commercial town. Always a good bet finding parts. And it was. First shop we walked into had it. So that was done, but needed some fruit and veg so visited the local busy market. Then we were heading south for about 10 km to our turn off.

This was a dirt road. but not just a dirt road, this area was a cloud forest area (without the forest, I mean once it must’ve been but now it is deforested and agricultured) Still cloudy though, moist and rainy most of the time. Actually, as deforestation goes, it was very pretty. 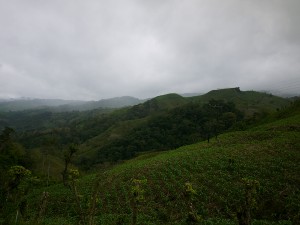 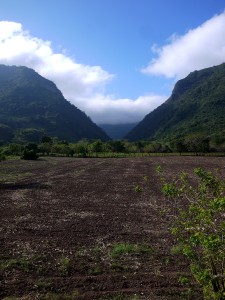 This was towards the end of the day and towards the end of my tolerance of a perfectly normal day yet seemed so hard to me for some reason. The road was very bumpy, steep and winding and on top of all super slippery, plus as being the end of the day, people and animals walking along and across the road. Now when a 9 tonne vehicle starts slipping sideways and downward my concerns rise up to the roof. I was holding my breath for minutes without realising it. John was handling everything absolutely brilliantly. He is a pretty confident driver on slippery roads, plus I think, secretly he even enjoys it. Unlike me. People, not aware of our ice-skating manoeuvres, wouldn’t move so I got extra nervous up to a point when I just cried out loud “STOP!!, I want to stop. Now!”

Just 20 meters round the corner was a turn off to a small community, Communidad Cacao. We pulled up there and asked the first house for permission. It was fine. Of course, it always is. Again, very friendly people. Within 10 minutes we had the whole village around Burt. We were chatting to them for a while and felt very welcome. Had a lovely peaceful night. 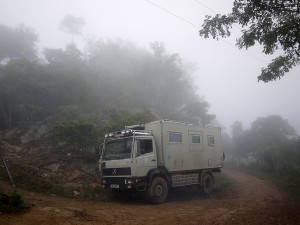 The next morning we thanked the family for their kindness and we were moving on. We noticed that just 50 meters from where we turned off last night the road became pretty dry and passable with no problem, beside I was myself again so err… happy travels all around.

It took a few hours to get to the lake where we heard of a couple of places to stay quite near one another. A brewery and a Farm-hotel-complex (They call it Finca Hotels which is a working farm with accommodation or camping and facilities) We decided to stay at this second place but, surely pop in to the brewery for a sharpener before we park up.

The brewery was really cute and seemed well run though we could’ve not fitted in with Burt even if we wanted to. They had a few homemade beers. They weren’t good but it was fun to be here and have some homemade stuff, even though it was cloudy and sweet. Plus we bumped in to the same couple of couples we met in Copán 2 days ago. Tried a few beers, chatted a little then it was time for us to head to our camp.

As soon as we arrived we noticed it is, again a touristy, expensive place with no personality or friendliness. It was quite pricey but at this point there was no other choice so we decided to go for it just for one night and leave tomorrow morning (even though we were keen to park up somewhere for a few days after a few weeks of moving-on’s and kind of hoped this was going to be a good place) Anyhow after a sloppy welcome at the reception we parked up on a grassy area next to the restaurant, hunted for electricity and water ourselves and had an early night. We woke to a microphone test at 6.30 in the morning! (which involved playing full blast classical-pop of Vivaldi, The Four Seasons) then full buses of people arrived to start some kind of a party at 7.30AM. This was kind of weird but we were packing up anyway and without finding out what the party was about we left Finca Las Victorias behind us and headed to the Caribbean side of Honduras.

We knew about a German guy who runs a beach hotel and welcomes overland travellers with full facilities. On the map it looked 2 days drive away, again through cross country roads but we didn’t mind.