I (and the lonely planet) calls Chalatenango area Northern El Salvador, though I got confused the directions here -I always felt East was North and so on. Anyhow, after the balmy cool temperature, we spent a sticky, hot, sweaty afternoon in a big town hunting for a part (our inflator thingybob broke so needed a new one soonish) -which we didn’t find at the end of the day, though for Johnny’s biggest joy we found a horn! We were planning to get a horn with a proper sound, as oppose to the original goat’s squeak we have, as it is a “currency” for travelling in South America. Apparently you gotta match the sound to the size of your vehicle so the opposite traffic knows what to expect round the corner.

Being towards the end of the day, with the Dutchies and with our new horn (still in the box) we were now hunting for a place to stay. After trying a nice looking, public swimming pool/ water park -we didn’t fit, we ended up on a dusty, dirt flat next to a petrol station. It was still hot, hot, hot. And it didn’t cool down throughout the night so we were eager to move on as soon as possible in the morning as we knew where we are going is, again in the mountains and it will be a lot cooler.

After a whole day drive in the windy, uppy-downy roads we still weren’t at the place we were aiming so stopped at a mountain village’s large grassy patch over looking to a breathtaking scenery with hills and mountains. It was a lot cooler and very very windy.

The next day we had only a few hours drive ahead of us so we left early. The road was even more winding and steep but when the pine trees appeared I knew it would be gorgeous and cool up there. We arrived in Montaňona in the early afternoon hours.

Montaňona is the very last little community in the Northern El Salvadorian mountains (before you’re practically in Honduras) tucked away in a rugged, wild pine forest. It also have history of the civil war and has a few things to offer. With a few hours hike in the forest, you can get to see an underground hospital (well, a carved two rooms cave that was more like an emergency operating room) and a guerrilla radio station, antenna and such. The hike itself is very nice, just to enjoy the smell of the pine and the view but the interesting tatus were bonus. We got a guide, Cezar Alas (!) to take us around. 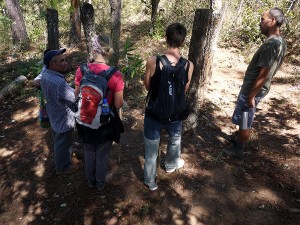 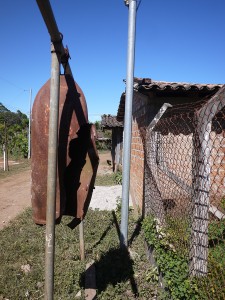 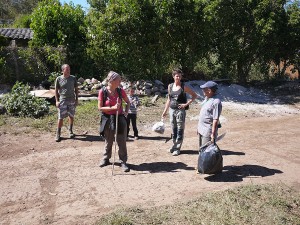 The village is very small and modest. We had no problem to park up on the football pitch where we had a constant stream of visitors, kids checking us out. It was really nice and Erica and I had small chats with the kids.

We stayed 2 nights here and decided to move on. The Dutchies needed work on their brake pads so left on Saturday in the hope to find a workshop to solve the problem.

Arrived to the capital of this area, Chalatenango at around midday and found a mechanic to help Erica and Michel meanwhile John and I went to hunt for water to fill up and change the oil in Burt. 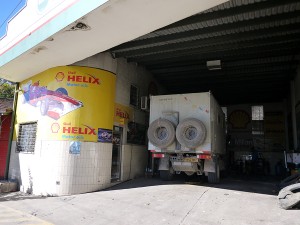 Both jobs took several hours but we were done on time to get going on towards our final destination before the border crossing tomorrow.

We got ourselves a beautiful spot by the huge lake (Lago Suchitlan) for the night. Though we didn’t know about the millions of morning bugs yet. The view was wonderful and Dunya loved the water.

The next day we headed to La Palma a few km from the Honduran border. There was a small hotel with wifi and facilities where we parked up. Erica needed to catch up with writing and they planned to stay for a couple of days, and we were keen to move on and cross the border the next day. So we had our last supper together with the Dutchies -at least till we see them again.

The following morning Johnny and I packed up, said our “see you later’s” to Erica, Michel and Dunya, and headed to the border.