After leaving the dusty, hot beach we headed north to the Morazán area. There were a couple of communities we were interested to visit, besides the supposedly cool climate attracted all of us.

Morazán is the hilly, north-eastern corner of El Salvador and is known for being the area where the former FMLN guerrilla headquarter was based during the time of the brutal El Salvadorian civil war. There was the most northern town, Perquín that had a post-war museum and guerrilla camps, and El Mozote that had displays of remembrance. John did the research and we all were up for the visit.

We arrived to Perquín in the late afternoon hours and found a small, family-run hotel where we could park up, tightly with both vehicles. The following day we visited the museum and a reconstructed camp which was fascinating. At the museum we had an ex-guerrilla guide and with Erica’s translation we understood more about the war and post-war situation. The museum was small but had enough pictures, documents, histories of those who died, anti-war posters, display of the old equipments, weapons and vehicles to remind the visitor about the war and its struggles. I think all four of us were fascinated by it all and I certainly was very pleased to visit this part of the country. 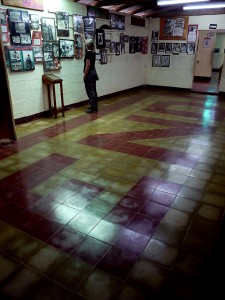 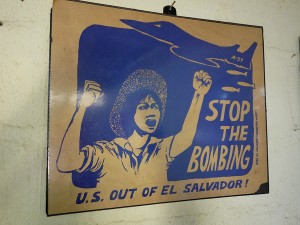 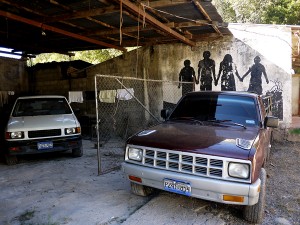 El Salvador, wrongly has a reputation of being dangerous but we only experienced the opposite. Where ever we went and who ever we came across with was friendly and helpful. In Guatemala we came across other travellers and they were planning to miss out El Salvador completely because they heard it was not safe, or some who were planning to spend the necessary 2-3 days only and scoot through it. It is a pity. There are so much more to this country.  El Salvador certainly has a different vibe from Mexico, or Guatemala. I could sense that the civil war made an impact on the infrastructure and the people. No one wants it to happen another revolution ever again so the government tries to live up to its pledge ever since and the people appreciate it and take care what they have now. Even we, as foreign travellers had more respect here than in the countries before.

We spent a couple of nights in Perquín at this little hotel. It had high speed wifi (which become a quite valuable thing, as we haven’t found wifi since in El Salvador) So we caught up with emails, skype and the blog and decided to move on the third day morning but stay in the area. 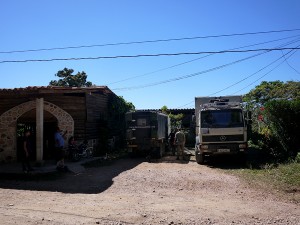 John read about another town, El Mozote that had a history of a devastating event in December 1981. Government soldiers marched in to this town on 11th of December in ’81 and executed everyone one in the village. Today El Mozote has displays, bright paintings on the walls, there’s a plaque with name who had died back then. We thought we could stay in the area somewhere in the wild and visit the town.

10 minutes after we left the hotel we bumped into a very lovely little coffee farm (finca) that welcomed visitors to stay, and it was about 5km from El Mozote. They had a little cafe on site, a couple of swimming pools and a trailhead leading down to a valley to a river and a waterfall. It could have not been more perfect, and with Erica’s negotiating skills we only paid half price to stay.

The following  day the boys, John and Michel walked in to El Mozote and back which took the whole day. Erica and I stayed back at “home” and did some long-waiting domestic duties. 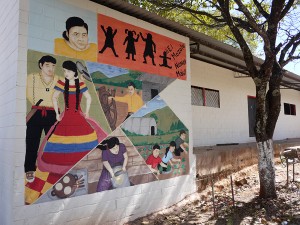 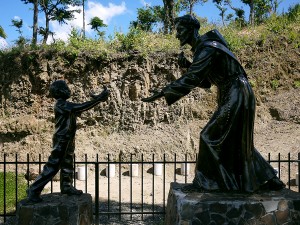 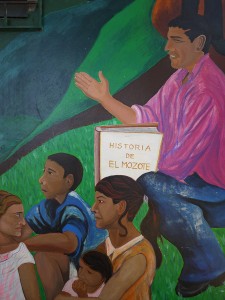 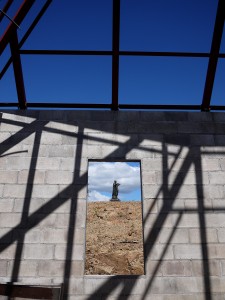 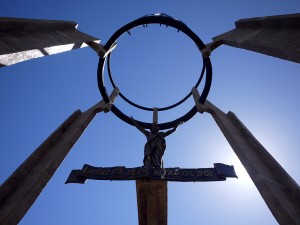 This was a very nice place to stay but we decided to actually move on, as there were many boondocking (wild camping) opportunities in this rugged and beautiful area.  The following day we packed up and off we went to find a good spot by the river -Río Sapo.

Which we did. A remote, gorgeous spot, parked on large black rocks right by the river. A few people who were, at the end of the day driving back from a swim in the river, stopped and chatted to us, saying that we choose a very fine spot for camping and to enjoy ourselves. It was a lovely night with full moon and, still with cool temperature. 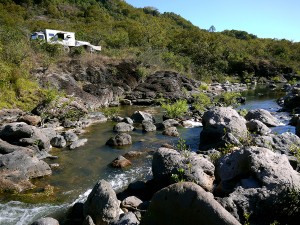 The following morning after Dunya had enough of swimming in the fresh cold water, we packed up and headed back south to the midland just to head back up to northern area of the country to visit some remote places before we say goodbye to El Salvador.