We woke early as Tall Boy visited us with his business partner, Sydney in his logging business. Sydney was from Surama the place we were going to visit (though he was on his way to Brazil for a week so we won’t be seeing him in the village) Anyway, at our surprise visit, at half past 6 in the morning I made coffee and John chatted about logging with them for an hour or so. And after they left we took our time to pack up and leave for the northern part.

We were in Guyana over almost 2 weeks and only have been in the south or around Lethem. Which was wonderful, and as far as friendly people are concerned I could just stayed there even longer. But there are many places to visit in Guyana. Particularly this southern part of the country. Jungle, rivers, waterfalls, canopy walks, hiking, bird watching, animal spotting and so on. Loads to do. The only inconvenience for us is that you cannot do it by yourself. There are designated eco-lodges to stay only and you have to have a guide everywhere you want to go. In some places (villages or communities) you have to check in and report that you are there.
I actually like this, really nice to see that a country is building an infrastructure for safe tourism and communities actually getting something out of it. This works great for the communities that work close with tour-operators who bring them tourists. However as independent travellers, like us with our own transport, accommodation, food etc it seems somewhat a nuisance. These eco-lodges or ranches are pretty pricey. Though they are well worked out and people-focused but for us it was expensive and we realised at the end that we could only afford to visit one place. 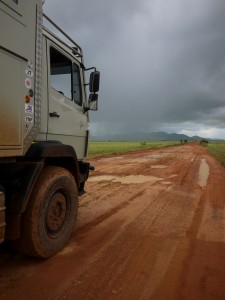 On our way to Surama (this is the highway)

It took us 2 days to get to Surama. A little Amerindian village in the jungle where the whole community is involved in eco tourism. They built a rustic lodge with palapa huts, a little restaurant and chill-out area and an office. 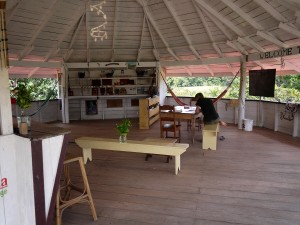 chill-out area on the gallery

The staff is from the village and they take a turns each month to look after the lodge (from the cooking lady through the gardeners to the guides) They are everso friendly and welcoming. It is very impressive what they have done and achieved. Even the few km road (that is much better condition that the main road) that leads to the village is well looked after in every season and is dotted with wisdom quotations and welcome signs. A nice touch. Besides tourists, they receive a constant stream of anthropologists who move in here for months to study the villagers and their lives. We met one of these guys at the lodge. (there were about 7 more staying in the village)

When we arrived we were welcomed by Jackie this month’s lodge manager, and by the staff. They took us around and let us park up. Jackie was happy to tell us the brief history of the village and how the idea of tourism came first. I loved this place instantly. The humbled, dignified way they approach to tourism had its impact on me straight away. We were welcome to visit the village and look around but weren’t allowed to wonder off to the jungle on our own so we asked if we could have a guide tomorrow for a canoe ride. I also got fascinated by hearing about Malcolm the last Shaman of the village so asked Jackie if there’s a way we could see him. She organised it all for us. 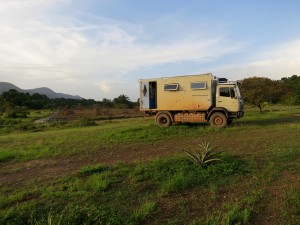 our spot at the lodge
Surama, Guyana
June 2014

We regretted arriving a day late as they put up a traditional dance ceremony for the few people who were leaving that day (and for us if we have arrived on time) But unfortunately there was nothing we could do about it. There was a young American anthropologist staying at the lodge, James who we spent our evenings with. We ordered dinner every evening and spent it, also sharing our Venezuelan beer reserve with  him. There was this female half-wild-half-house cat that wasn’t supposed to be in the dining area but try to lock a wildcat when there’s food involved. After the staff left in the evening we were still hanging out there over our beers, I sneaked her my leftover and soon we become friends. I think James wasn’t as cat-friendly as I was but he didn’t mind.

The next day we chilled out until our guide came to pick us up. She took us into the deeper jungle where we jumped in a boat and paddled down the river between the trees, she was explaining the name of the trees and birds we spotted. It was truly magical -even though we didn’t see an awful lot of animals but just the place alone was worth the trip. We got showered on by this biblical rain at the end but that just made the rainforest experience perfect and complete. 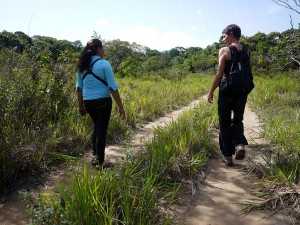 Going for our tour with our guide 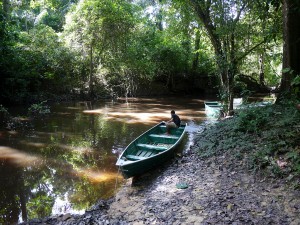 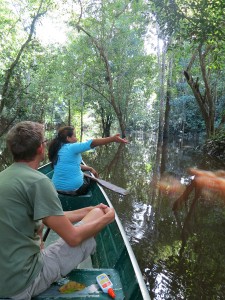 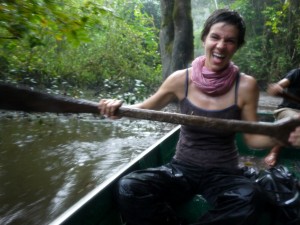 The following day we visited Malcolm the last Shaman in the village. He only speaks Makushi so we had his daughter-in-law, Jean translate for us. He is more like a medicine man using jungle and forest-given herbs and plants for healing. He talked to us, examined our arms and hands and looked deeply-deeply in to our eyes for a while. At the end he recommended a few things that his son could go and collect in the nearby woods (we went to him so he could explain what tree to look for if we wanted to collect more sep of it later) Malcolm also blessed a few things for us and let us go. The whole thing didn’t take longer than half an hour and I think John was a little disappointed (at that point John and I were reading a book about powerful shamans in Mongolia and he might’ve thought we’ll be partaking in a complicated spirit-calling-animal-sacrificing ceremony or something) but I enjoyed the simplicity of it and was just happy to meet a shaman. 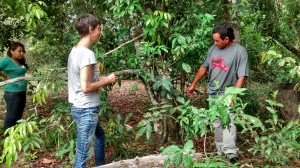 Then I spent the whole afternoon hunting for bloomin’ cockroaches then cleaning, washing and sterilising everything in our kitchen cupboard. Grrrrr… These are different from those big ones, these are tiny like 1 cm size but they are just super creepy for me. The only creatures on the Planet I cannot stand. Johnny was amazed how freaked-out I was when I found one (didn’t even know it was cockroach first) and how cool, almost amused I was when we found a black widow in our machine room a few months back.

We spent an extra day just to chill-out in the hammocks and read and hang out with our guide (whose name I shamefully forgot) then eventually we said goodbyes to our everso nice hosts and prepared to leave the next morning.

We left early-ish in the morning, and planned to make it to the border to cross back to Brazil. So this was our last day in Guyana, this beautiful and friendly country I was so happy to visit. We legged it back to Lethem, wanted to say goodbye to Tall Boy and thank him his excellent work again. Then we didn’t just make it back to the border that day but to all the way to Boa Vista where we managed to park up for the night by the river. 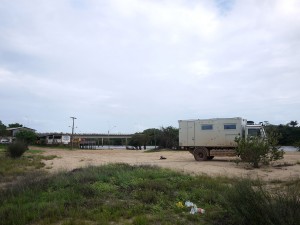 We calculated the option to drive back up to Venezuela -just to the border, to fill up with the cheap fuel, stock up with few things, that were considerably cheaper than in Brazil and, despite the 500 km round trip we decided it was worth it. So the next day we headed back north for a couple of days (stayed at Eric’s place again) and did our necessaries before, for the third time entering Brazil. 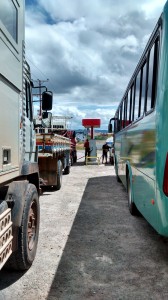 Back to Venezuela for a top-up

*This border crossing was very simple and no paperwork needed for the vehicle as we were only going to Santa Elena, the Venezuelan border town so we only needed out passports stamped-in. At the border we picked up 6 Japanese backpackers and a Brazilian hippy who filled Burt with laughter and delight on our short journey to Santa Elena where we dropped them off.