There is no border crossing between Guyana and Venezuela -despite they’re neighbouring countries. You had to check in to Brazil first, travel a couple of hundreds of km to Boa Vista, then head east for another 180km to the border of Guyana. This was actually necessary, from the point of you of getting a visitor visa for me -as a Hungarian citizen. In Boa Vista there’s a Guyanese embassy where this could be done. 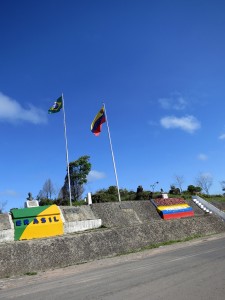 We travelled all day from the Abyss to the border and stayed the night on the Venezuelan side as the border offices and the international petrol station was closed by the time we got there. The next morning we got in line at the pump station first. Apparently if you have other foreign (than a Brazilian) vehicle they let you go ahead in the line. We didn’t do this, but for diesel it is always lesser cars than for petrol so we didn’t have to wait long. They call it the international fuel station as here foreigners are allowed to purchase fuel. The diesel here costs BsF 32 as opposed to BsF6 like in the centre of the country, but it is still much cheaper than in Brazil so we filled up. 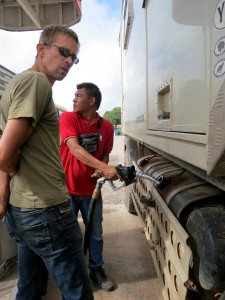 After this we went through the border crossing formalities. This was the easiest, quickest crossing. The most time the Venezuelan check-out took but with all the wait and queuing took only 20-30 minutes, then the Brazilian side took about 10 minutes. Weirdly -and we checked with 4-5 different people, we didn’t need the usual vehicle temporary import paper for Burt or anyone cared for checking the vehicle.

We got all done by 9AM and we were in Brazil. I loved it already. People we came across with so far were very friendly. The road to Boa Vista is a good, paved road that for a short while at the beginning winds its way down to sea-level and then the rest of the road is pretty much straight all the way to the city. It took 3 hours to get to Boa Vista, a large spread-out city with modern shops and avenues. We knew the address of the embassy so headed right there. I got the visa the same day however it was late afternoon when we finished so we just found a convenient place to park up for the night in the city, had something to eat, a couple of beers watch a game on the screen and have an early night which was relatively quiet and cooled down by the rain.

The Morning was grey and rainy as we drove out of the city heading to Guyana. It was an easy drive and took only a couple of hours to get to a quiet, relaxed border crossing. We checked out on the Brazil side within 5 minutes. In Guyana they drive on left hand side and most of the vehicles are right hand drive so we felt home. On the Guyana side of the bridge there’s a clever little lane-swapping system so without confusion (or even notice it) drivers find themselves on the correct side of the road.

Now driving on the left hand side

Immigration and custom seemed very “British”. Probably the only border crossing where the officers wear uniform (as I can recall it, most of the countries’ border crossing officers wear casual jeans or Bermudas and T-shirt which occasionally I mistaken them to money-changers or loiterers and sent them away!) Anyhow, no mistakes here. Guyana has a proper office for each department and in the right order too. First we needed to visit the health department to show our yellow fever certificate, then stamp in our passports and then custom. First it seemed quick and thought we are going to break our 30 minutes border crossing record we did yesterday but at custom first they asked to take a seat. After 15 minutes wait John walked up to the seaming bored and bugger-all-to-do officers (mainly just playing music on their phones, filing nails or chit-chatting one another) to ask them politely what it is exactly we are waiting for. It took an astonishing 10 minutes to get them explain to us that we actually first of all we need a vehicle insurance that we only can get in Lethem -the border town. Without the insurance they can’t proceed the import papers. Err okay, it was one of those backward thinking again… (why did they make us sit and wait and not telling this in the first place? is a mystery) Oddly they didn’t know a place in town for insurance, they had to ask around in the office to find out where we can purchase one from. When we got a suggestion, we were free to go a drive in town -which was a strange concept but by this point of our travel we aren’t that surprised when things like this happens, just go with it.

It takes 5 minutes to get to Lethem. It is a spread out small town with mud roads, lots of large Chinese warehouse-like shops (lots of Brazilians comes or used to come here shopping) and friendly locals. The most happenings are at or around the airfield. After we haven’t find the place the border officers suggested for insurance we headed to the airfield where we found Shirley -someone our travel book mentioned as a good person to ask for help. She has a shop/tourist info type of place and her son has a bar next door. She was very friendly and told us where to get insurance, where we can shop for food and offered to park up at her place (her home, a couple of blocks from here) for the night.

We got the insurance, did some shopping (Marmite on the shelves in the supermarkets!) and headed back to the border to get our papers done. There we learnt that they have an apparently new, strange and twisted policy if we wanted to go to Georgetown (capital of Guyana which is located north on the Caribbean coast)
If we want to travel to Georgetown or the northern part of the country we have to apply for a special permit err… in Georgetown. This border crossing office is not entitled to give us a permit for the whole country -only to the bottom half.
There is a river that pretty much cuts the country half, we can travel up to that point with no problem. But there is a police/military check point at the river crossing and they only let vehicles through with a permit.
Here, we can only get a 48 hours permit to Georgetown, find the custom office and apply for a longer vehicle permit there. If we slip off time -which could easily happen as the (only) road that travels from south to north is a mud road and we are well in to the rainy season, so if we miss our 48 hour deadline they confiscate the vehicle!
Otherwise we can just travel with our vehicle in the southern part of the country freely with no vehicle permit what so ever (!) as long as our tourist visa allows us. That’s not a problem.
Go figure.

Believe you me, John is not a man of letting these kind of illogical things go so easily. He grilled over and over the custom officers, firing cross-questions at them trying to make any sense out of this until they couldn’t explain any further and just laughed embarrassed. Of course, we eventually decided not to visit Georgetown, also according to our research most of the places we intended to visit were on this side of the river so logic or not, we dropped the whole thing.
I think for John, it was more that “someone” was controlling where we can and can’t go, especially by an illogical, backward rule like that. But hey, we were allowed to scoot around the bottom half of Guyana and I was looking forward to it.

So after this was sorted, we rolled back in to Lethem and headed to the airfield again. There was England playing and we found and English guy and a Dutch guy watching the game at Shirley’s. Turned out the Dutch guy was Shirley’s partner a biologist and very interesting. We ended up having some food next door at the bar and chatting and watching more football with Haan till late. Then he lead us back to their home where we parked up and stayed the night.

Tomorrow we want to visit a farm further south form here that our book recommended and here in town we can get info about it.

Next, Lethem and Dadanawa Ranch