We arrived in El Valle in the early afternoon hours and as we did in Boquete, we parked up in town and off we went to look around.

El Valle sits in a crater of an extinct volcano but to me it looked like, as its name suggests it also, that it is just in a valley between hills. Although the town is up in the hills it is nowhere near as high as Boquete was. During the day it was reasonably hot but, besides the wind picked up too the temperature dropped a few degrees for the nights. The town has one main road where the market square and all shops, restaurants and cafes are located. The long side streets spread to the sides dotted by posh houses with large, lush gardens owned, mostly by wealthy city people who come out here for the weekends from Panama City which is only an hour or so from here. There’s a considerable amount of expats, mostly northern Americans here too who live a seemingly quieter life here than the impression I had with the Boquetean expats. El Valle has a few interests to offer; a couple of waterfalls, hikes to a few viewpoints, a hot spring, zoo, a butterfly house just to name a few.

After spending the whole afternoon walking in town, having a feel of it we decided to drive out of town up to the hills to find a camp spot for the night, perhaps a few nights. We learnt it by now that it is usually it is a good bet, and we always find a quiet place. As we were driving further out we thought it’ll be lovely, the temperature was dropping too and the scenery changed from dry yellowish colour to lush green, semi-jungle-y. Then on the road lead us through a huge factory of caged chickens spread all over the hill tops. Besides we didn’t like this at all, it was also private property area but we needed to find a spot as it was getting late. Eventually, we found a small ranger shed at a trailhead and tucked ourselves behind the little hut and went for a little walk on the trail before it got dark. It was really worth it as the path led us up to a lookout of the valley which was rather spectacular. 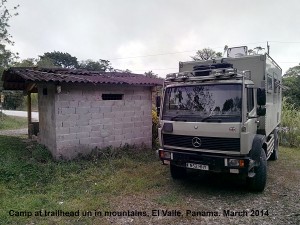 In the morning, after a nice, cool and quiet night we rolled down, back to town and look for another possible spot. At another end of town we found a steep, dirt road leading up to one the hills where we found an area for us to park up. This was a lot closer, approx 1-2 km to the centre which gives us a chance to leave Burt and walk down and up to town. We stayed here 3 very windy nights. We did some hiking and walks but eventually we were keen to move again, perhaps in town somewhere… 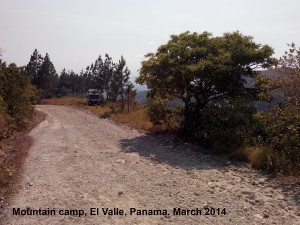 During our 3 days up in the hill we walked to town a few times for shopping, wifi and to check out the hot spring. The hot spring was located at the edge of town, an easy 10-15 mins stroll from the centre. First we went there was a bit strange as they had a problem with John’s swimming shorts! So we presented them all his shorts, and after a 3 persons discussion they picked and approved one pair so eventually we made it in. That afternoon it was very quiet in there and was only another couple in the pool with us. And that’s where we met Nina and George, the delightful poets, writers who were spending 6 months in Panama and have already been in El Valle for 2 months. We exchanged email addresses to arrange a hike together one day and they also told us about El Valle’s best kept secret which was a genuine small Italian place where the Italian couple bakes the best pizza. Didn’t have to twist my arm to check this place out so after we said goodbyes to our new friends, John and I walked up to the Italian house to book one of their 4 tables for that evening. The pizza was absolutely one of the best pizzas I ever had and what was better than the pizza is the home-made squash pesto with gooey soft dough as a starter. Absolutely a real treat!

The following day we drove down the hill, parked up and walked around town in the hope to find a lot to park up for a few nights. As every square meter in El Valle is private property we didn’t have much luck first but when we were walking down a street by an area that looked like to me as a building site a couple of American guys, Mark and Robert asked us if we were looking for a place to stay. They were about to open their hostel (still working on the swimming pool, and making few touch-ups) and the rooms were ready for guests. We told them that we have an RV and looking for a patch of land to park up. They remembered seeing us in town a few days back and Mark, the owner offered us to stay behind the hostel building on a huge grassy, tree filled area, next to the stream. It was a very nice place. John, for return offered to help them setting up their home page, take some photos and create a facebook page for the business. So now we had a great place to stay just minutes walk from the centre. We could fill up with water and use their internet. 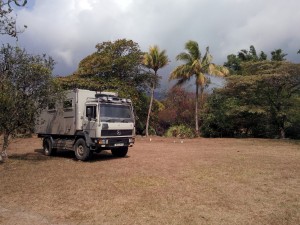 At this point we were in the area for quite a few days, we knew our way around town now, made some friends, went for a lovely hike with Nina and George, also met a few Canadians who invited us for drinks to their house, we even managed to find an “Irish pub” on St. Patrick’s day! Meanwhile we were waiting to hear from the shipping agent about our shipping and keeping in touch with our traveller friends The Dutchies, Petra and the Family, John was working on the hostel’s website.

One afternoon, we were just coming back from a walk when The Dutchies rolled in! A quick arrangement with Robert about the camping and, as in the good old times they were parking next to us with Dunya cooling in the shade under Burt. It was lovely to have old friends. And more was coming… 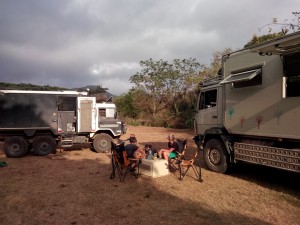 A couple of days later Petra rolled in with Boris then the following day The Overlander Family. It was like a little overlander party and we were all having a nice time. Of course we visited the hot spring again, went for hikes and dinners to the discovered good restaurants. It was here where Erica and Michel made their decision to sail back home rather than shipping to Colombia. It is the end of their trip for now but this is what they wanted and they changed their booking. So the last day we all organised a little “good-bye do” for them which turned out to be a very nice party -and what we didn’t know then that this was our last time to see them on this continent. 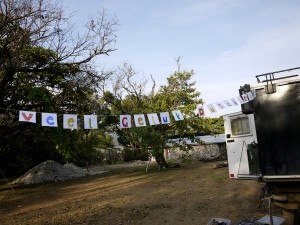 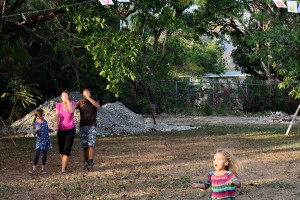 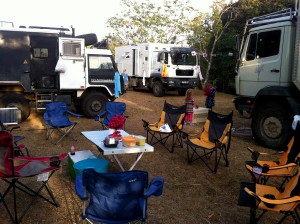 John and I decided to move the next day. The police inspection needed for the shipping was coming up in a few days time and till then we wanted to see a few things around Colon and do some shopping in Panama City so we said see-you-laters to everybody, goodbye to Erica and Michel, Mark and Robert and left.

We spent almost 10 days in El Valle where we met Nina and George, enjoyed some activities and had the best pizza!

Now we are getting ready to leave Panama, leave Central America and looking forward to South America, as some say “The real-deal” of the Americas.

But before that, next the Panama Canal and San Lorenzo…