After a wonderful 3-4 days in Boquete with its fresh cool air we were on the road again.

Johnny was organising the shipping not just for us -as Betti, John, Burt, but for another two vehicles (the Dutchies and another Dutchie, Petra and her bus Boris) So we kept in touch with these guys and the Brit Overlander Family (who we met in Nicaragua) By the way The Overlanders will be on the same ship too though they booked it separately. Anyhow we learnt that these three are actually together somewhere on the beach in Costa Rica and will be crossing to Panama in the next few days so we undoubtedly meet at some point.

In the meantime we made a plan to visit the Pacific side of the country. Soon after we cross to South America, we won’t have beaches so we thought “one more time!”. John looked up a cool-sounding little surfing beach, Santa Catalina bit off the beaten track and a long way to get to but thought it will worth it.

As we were rolling down the super glam 4 lane highway from Boquete to David (50km) leaving the cool air behind us, the temperature was rising and didn’t stop till 36C. Then we had another 200 km ahead of us in the heat. It was actually a lovely drive but the heat was getting into our heads and were getting a bit agitated. We finally rolled in to Santa Catalina. I liked it at first glance; a few nice looking houses, a few restaurants and cafes with fairy lights, yoga classes and some hippy stuff.

We had a couple of places (some surfers cabana/camp places) with wifi and restaurants in minds where we thought it should be OK to park up but no. One of them didn’t really want vehicles and the other was awful, a desert with absolutely still air, no shade just the bleaching sun. Both wanted a ridiculous amount for park up. After trying a few more places we found on our way we ended up on the public beach and it was just fine. We just wanted wifi and eat out somewhere nice. Where we parked up eventually was a little beach restaurant and John and I immediately visited it for a couple of ice cold beers. 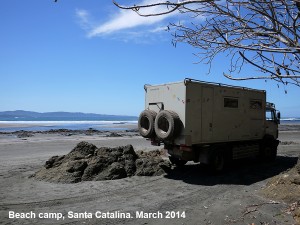 Here we met a delightful Canadian couple (Kate and Joseph) who just got married. As we were sitting there chatting we got invited to a small beach party that night as well. Somehow the rest of the afternoon turned in to a lovely social gathering. Joseph and Kate came to visit Burt. We opened our finest white wine (which is always the one and only Chilean boxed Clos) some beers and snack on top of Burt, watching the sunset. Then decided to spend dinner together back in the little restaurant and visit the beach party together later on where we met some good laugh pot heads but it was excellent fun.

The following morning we considered to stay as the company was great (some new people from the bonfire last night too) But the heat and the airlessness made us decide to leave. So as they say in nautical terms, we caught the trade wind to move on with it (haha)

Johnny looked up another, and the last chance for higher elevation place, El Valle before we will have to roll down the hills for the shipping. Samantha (satnav) said it is nearly 300km so the chance to get there the same day was slim though we knew a proper RV park (possibly the first since Guatemala) on the way.

It was sizzling hot and airless all the way to Santa Clara (where the RV park is) and we did everything for not to stay there but after visiting the beach first where they advised us that it is prohibited to park on the beach and the two restaurants didn’t want us there we had no choice. At least this RV park has a swimming pool! and that was the only thing I cared about at that point. John did not like the place at all so we had a bit of a squabble. The facilities may have been fine, finally we had wifi here too but the owner was a miserable, very unfriendly woman and that always makes it harder to give them 20 bucks. (plus she had about 15-17 endangered small and large birds locked up in small cages -later we were told that she has monkeys and other mammals at the back yard too)

We stayed here a very short one night and the next day we were out of there. We only had about 50km to go from here so we knew that we will be back to lovely cool air by the end of the day.