After crossing in to El Salvador in the north we meant to stay there in a nearby National Park but as it was still quite early in the day (besides we heard that dogs aren’t allowed in the park) we all decided to head down to the Pacific side and enjoy the beach for a few days. (We really liked the black sandy beach in Guatemala a week or so ago)

After a long afternoon drive we arrived at El Zonte, one of the most recommended surfing spot. This part of the coastline is hilly and the road winding above the beach opening up some gorgeous views of the beach below. (slightly reminded me of Big Sur) So when we arrived at El Zonte the boys parked up by the side of the road and Erica and I walked down the small street to the actual beach-village to see where and how we could fit. Despite El Zonte had a groovy atmosphere and some nice looking cabana/backpackers places it seemed very crowded but above all too tight for us.

We moved on but only in a few km’s we found a wide enough dirt road leading down to the beach. This was another small village with nothing much but a few houses and restaurants with locals. This road ended into a large pond that seemed as though it was created by the high tight through the decades. there was a narrow footpath that leads through to the sandy beach. John and Erica walked down the small beach surrounded by high cliffs where were a couple of little fish restaurants and a couple of wooden huts with hammocks.

While waiting at the vehicles people walked up to us and offering to stay at their property for some fee. It was quickly getting dark and I was getting nervous about just driving up on to the beach. To me, it looked complicated and risky besides, by this point we were surrounded by whole bunch of onlookers which, for me, it’s always more stressful.

When John and Erica came back they thought we could drive through the pond on to the sand and stay there. A local man came up to us, Thomas who, we found out owns one of the restaurants and the wooden huts down the beach and invited us to stay in front of his place.

The boys discussed technicalities how to drive through the pond and through the sandy bit to the restaurant without getting stuck and off went Panda first. It looked all effortless and no problem (as always with their 6x wheels and light weight) then John drove Burt in to the pond and pushed through on the sand to the spot. We nearly got stuck but again, let some air out and that did the trick. 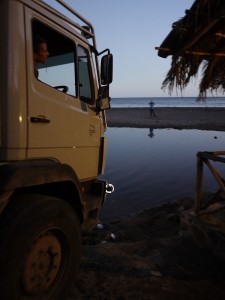 Crossing over to the beach
near El Zonte
January 2014

Within a short time we had a prime spot on this lovely beach and could relax with a few cold beer and ceviche at Thomas’ restaurant. 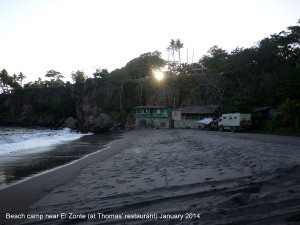 I have learnt something; if we were just the two of us (John and I) there is no way I would’ve let us drive on to the beach under these circumstances. I would’ve gotten in to a fit and made us park up on the dirt parking lot between those rundown buildings, and John would’ve been very upset with me and not talk to me for two days. Instead, I was amazed by Erica’s confidence in Michel and Panda, plus how she was very friendly with our host, Thomas. Everything actually was effortless and fun for the whole village to watch us. So it was happiness all around. Johnny really enjoyed the challenge of the parking us and I admit I have to show my trust and respect for John -who is undoubtedly the best driver of a 12 ton truck with the size what we have and his instinct never lie in a situation like this.

We had a wonderful two days here. Dunya was getting better too and enjoying the water. There were enough breeze to have good night sleep and Thomas made sure we are OK. 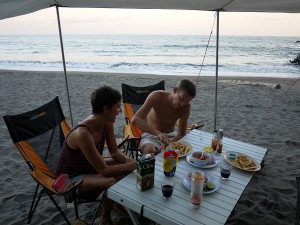 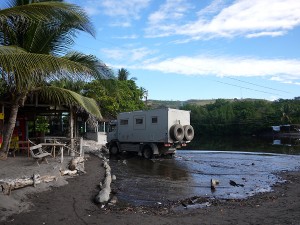 Back to the land
near El Zonte
January 2014

On the third day morning we moved on and decided to stay on the coastline but much further and have a few more days by the beach with a different scenery.  Besides the Dutchies were thinking to visit a vet just to check up on Dunya -though thankfully she was doing better and better each day, and we needed a new vehicle battery! It blown off the morning we crossed the border and we are starting Burt from the leisure batteries (which is OK for a few times but for too long)

There were a few towns marked on the way and as always Johnny had his good feeling about finding batteries. Of course these are truck butteries, which with luck you can find in odd shops but we also have a size restriction due to one of many silly battery-box design our engineer did back in England. Anyhow a couple of hours stops and search with Erica’s interpretation we found the right size batteries in a busy town by a busy road and John and Michel were on the case to change it. Just when 3 overland traveller vehicles pulled up next to us. We had a quick chat then they were off. Within minutes there was another overlander form Switzerland. Suddenly it felt super hectic. But the batteries were swapped, dog was fed and had some drinks and we were ready to move on. 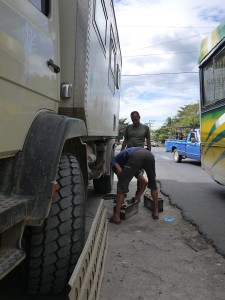 We arrived to this beach which was at the most southern part of the coastline near the Honduran border to find that the spot we thought we could park up was full of all the overlanders we met today and some we met in Antigua! It was great to see many people together but it seemed far to crowed for us , besides due to the overhanging top of the entrance gate we wouldn’t fit. Though Panda would have fit through, the Dutchies decided to come with us.

Just a few meter down the road was the end and a large gate lead down to an open beach. We asked permission from the next door restaurant and we were in. Well for $5/night but still it was spacious, we had a palapa between Panda and Burt and we had the whole beach. 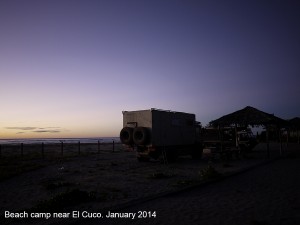 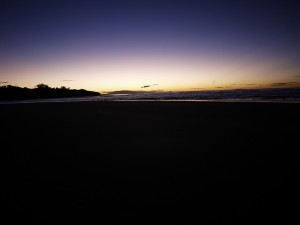 The first night/day was nice, we chilled out, went to say hello to the fellow travellers etc then the second night was so hot and airless and we woke to a penetrated smell of rubbish burning. John suggested to move on to the mountains, which isn’t that far but we have a chance for fresh and cool air besides this is the area that is very important of El Salvador’s history and we could visit the museum and the area to learn more.

It is great that the Dutchies were up for the sudden plan-change and with no problem and after we packed up, filled up with water we headed north to the mountains.