We spent 2 days at the volcano, Laguna Chicabal as it was really nice. Even that we heard that 120 visitors (boys church camp) is coming for the second day. But we didn’t mind. The first morning we walked up to the pretty Chicabal lake. 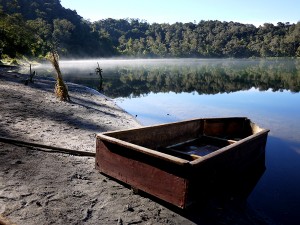 The lake, in the crater of the volcano, is considered sacred for the Mayans and they still come up to do ceremonies and leave offerings. It has a peaceful atmosphere that gravitates you there and invites you to stay still and just be. We walked up both mornings and left our offerings, chocolate and tobacco.. 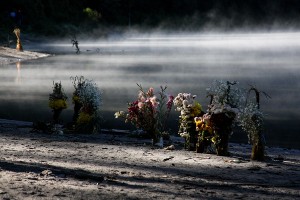 One of the reasons to stay one more night was that we knew we’re about to get down from the high elevation and head to the beach where it will be hot so wanted to enjoy the cool temperature for a little longer.

On our leaving morning we packed up and headed to Tecojate a little fishing village Pierre recommended as a good place to enjoy a quite beach. The town isn’t really pretty but its friendly people helped us to find a peaceful spot on the beach outside of town. 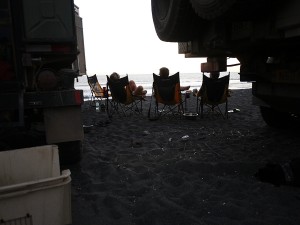 The Dutchies has a six-wheel drive, light vehicle so it was a piece of cake for them to drive through the soft (and black!) sand. We, as we learnt before, had to let our tires down which took a short while but did the trick. Once parked up, we made ourselves a social corner with the camping chairs and table which was just ready for sunset, which coincidentally happens to be beer o’clock too. We spent 3 nights here and we probable spent a little more time but Dunya wasn’t getting better, in fact she seemed very low and perhaps had a fever and Erica and Michel were keen to visit a vet. We decided to leave on the 4th day morning and head to Antigua where we planned to spend the last few days of this year. 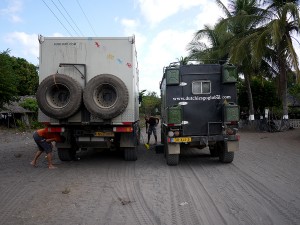 Inflating tires after the sand
December 2013

There’s only one convenient place to camp in Antigua which the parking lot of the tourist police and  is right in the middle of town. Here we met lot of travellers who some of the we knew from the PanAmericana 2013 facebook group so it was very nice to meet them and the ones who aren’t on the group.

Antigua in my opinion isn’t that mind blowing though it was perfect for conveniences, visit a vet, have wifi and spend New Year’s Eve. There was nothing really outstanding we did here but spent more than usual on eating out’s so we prepared ourselves for the border-crossing to El Salvador and  were ready to leave once the festive time was over.

El Salvador has a legal restriction policy about RHD vehicles. We did some research on this with not much luck as everywhere we hit our heads again and again in to the same wall; No RHD vehicles in El Salvador. We were very keen to visit the country and John was prepared to give it a try. Actually the problem isn’t not-getting in to El Salvador, it’s the leaving Guatemala as we have to hand in the Guatemalan temporary importation paper that they cancel and if we happen to have to return to Guatemala we couldn’t. Apparently we would need to spend 3 months out of the country in order to get a new temp. imp. paper for the vehicle. In this light I was slightly un-easy but John seemed quite confidant for the crossing and the Dutchies were happy to come with us.

We choose Anguiatú the least visited border crossing (where Guatemala, Honduras and El Salvador meet) and headed that way.

Once we  left Antigua we took the most direct but mostly dirt road towards East. We had a night at a very beautiful area in the mountains by a small church where we were welcome by the friendly locals and had another night by a volcano about 40km from the border.

Next, border crossing to El Salvador…