After we left Todos Santos we were heading to Quetzaltenango, a colonial town that was also recommended for its good Spanish schools. We found the town quite nice and relaxed, also found several schools though no parking -especially not for weeks opportunities.

We wanted to spend the night at a hot waterfall not far from town. It was getting late so we had to press on to get to the waterfall before dark. The drive was very pretty with colourful vegetable patches all the way in the hillside, well as deforestation goes. We got to the waterfall in the dark to find out that for parking overnight would cost a fortune. We tried to negotiate the price as we didn’t needed anything just simply park up but the guy didn’t have any sympathy for us and for the fact that it was already pretty late and dark and we had no other options. We left. On the way down the hill we found a patch of land, just enough space for Burt by the side of the road so we tucked ourselves in there and had an early and quiet night.

The next day we decided to head to Lake Atitlan. I found out that the Holland couple was in San Marcos la Laguna, one of the small towns around the lake so we thought we could try that town first. It also has a reputation of being quite a relaxed place with several yoga, meditation and other holistic classes, plus as there are enough gringos live here and nearby the little grocery shops has quite a good range of health food supply too.

The road from Quetzaltenango to the mountains of the lake was super fast, 2 lanes highway, then a paved winding road through the mountains to get to the lake. First we got in to San Pablo where we had to drive through small streets then it was San Marcos.

We arrived here quite early in the day so we had a chance to walk about and familiar ourselves with the small town. We were hoping we would spot the Dutchies’ vehicle which is an awesome conversion of an old Volvo ambulance vehicle that would be hard to miss. We were up and down on the streets and the only old dirt road that leads you out of town on the other side but no luck. Then we found a internet cafe and had several back and forth emails with them but kept missing each other and somehow the description of their campground wasn’t enough to locate them. Time was running at this point and we needed to stay somewhere so asked the police office if we could park up for the night on the main square which was fine. Once parked up we found a nice little restaurant with free wifi and we got online contact with the Dutchies. Within half an hour they were there at the restaurant. It was great to meet them and we found out about the lovely place they’re staying and that they already asked the owner if we could park up there too. That night we just stayed where we were but planned to drive up tomorrow morning.

The Dutchies (aka dutchiesgoglobal.com) are a fun, young couple of Erica, Michel and their lovable old dog Dunya, the sweetest Rottweiler you ever meet, driving their lovely old converted Volvo truck, Panda. During our dinner and few drinks at the first night we found out that we have a lot of in common, a very similar story and we are indeed very like-minded in our travelling styles. John and I decided it would be nice to park up where they are, for a while and maybe continue the trip with their company.

The following day we met Pierre the owner of Pasaj Cap, the beautiful place where the Dutchies already spent an enjoyable few days and agreed that we can park up here too.

I fell in love with this place at first sight. We got a grassy spot between an avocado tree and some coffee plants with a spectacular view of the lake and its three volcanoes right in front of us. Pierre has a very huge terrace-style property with a few stylish apartment for rent, his own beautiful house with his partner and three dogs, has his own private dock on the lake, citrus, mango, avocado trees and coffee plants, not to mention the fact that Pierre, being a true French man, has a good taste in food and wine too, and he had some superb quality beef, seafood and wine for sale!! It was paradise with and extra touch of wifi. 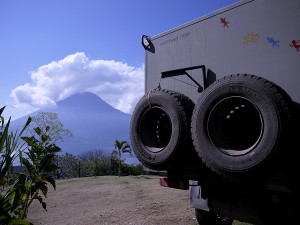 We decided to stay here for Christmas (a couple of weeks time) and leave in the first days of the New Year. It was the perfect place to let our hair down, relax and really feel home.

We had a wonderful couple of first weeks. We visited some of the lake towns on foot, then with the boats, Erica and I found a yoga class right in front of Pasaj Cap on the hill, and every other morning we had 2-2.5 hours fantastic yoga sessions. I signed up for Spanish for a week. John could catch up with hundreds of long-forgotten emails, sort a few things on Burt, with family and friends. We cooked together with the Dutchies or went out for a dinner together. We had movie nights and enjoyed lots of (reasonably) good wine. It was great.

Erica, aka half of the Dutchies.
San Marcos la Laguna
December 2013

Sadly an incident occurred with the dogs just a day before Christmas and the Dutchies were asked to leave. As we already had planes for Christmas they agreed to leave on Boxing Day. John and I thought about it and as much as we loved Pasaj Cap and Pierre we decided to move on with the Dutchies too.

Suddenly we were having our last couple of days cutting our yoga sessions short, did last minute shopping, stock up with the good meat from Pierre and had an improvised Christmas Eve dinner at a Japanese restaurant with sushi!

On Boxing Day morning we were packing up when we heard that Pierre told Erica and Michel that they could stay if they wanted. Of course it was nice and we were tempting but somehow we felt that the decision was made, we knew where we’re going next and I think Erica and Michel was happy to change the scenery for Dunya. We were ready. 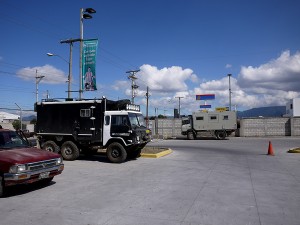 We said our good bye’s and left shortly after breakfast for a volcano and its high elevation laguna back up north, near Quetzaltenango. We did some more grocery shopping, filled up with fuel on the way and arrived at the volcano in the late afternoon. There was a grassy football ground at 2600 meters just a few hundred meters from the top where we could park up for a small fee. The change of scenery and a temperature was very nice. 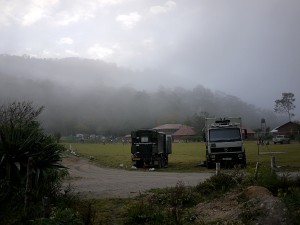 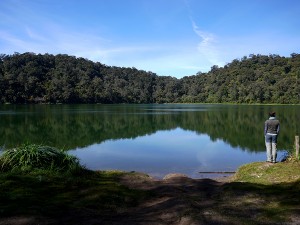 We were very happy to have travelling companions and I had a feeling that with our new friends there are more adventures ahead of us, and I’m looking forward to them.

Next, Antigua and to the border…