So we travelled half way down on the peninsula. We weren’t as impressed with Baja as we thought we would (sorry Baja lovers) For fairness, we appreciated the fact that it was out of season time so things seemed more deserted (plus more left rubbish around) and less lively. Although, recommended by a friend, we visited and stayed at one of the beach camps at Bahia Concepcion.

In the large bay there are there are over ten beach campsites. The only one that was away from the road was called Playa Escondida. (Not as if the road is busy but the trucks are travelling night and day and they are noisy) John had a good sense to pick out this little beach even that we kept missing it , driving up and down on the road several times counting the beaches… Then finally we noticed a rough little road and a weather-beaten small sign for Playa Escondida. About 3-4 kms the bumpy road lead us to the stunning little beach unexpected behind a hill, hence the name which means “hidden beach”. 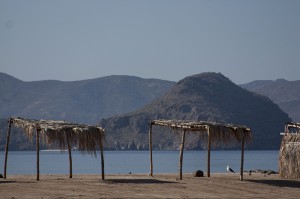 We arrived at dusk knowing that the whole beach is ours! Turquoise, crystal clear water heaving with water creatures, a few small islands in the distance and a couple of pelicans. I loved it here straight away.
After parking up, we made ourselves comfortable on the roof, it was dark by then (around 10PM) we were enjoying a couple of cool beers, counting the shooting stars and chatting away we heard footsteps behind us! I was hoping it was just my ears but unfortunately John confirmed that he heard it too. Oh crap! It is almost impossible to get to this beach without a 4×4 vehicle -which we didn’t hear arriving, and as far as we were concerned no one else was on this beach. We turned around and shone our torch, and again, and again… “Do you mind!!” a strong voice broke the silence from the distance. “Shoot! Johnny, there’s an English guy up there!” I whispered frightenedly to John. We looked at each other blinking… But somehow it was peace of mind knowing that there’s (a rather polite) man up there and not an axe murderer or something. We called it a day, went to bed and had a peaceful night sleep.

The next day, in the daylight we were looking around and only noticed a car covered with a blanket from the bleaching sun, hidden under a palm leaf palapa that we didn’t notice yesterday. No sign of anyone though. We spent a nice relaxing day, and again that evening we were enjoying the wildlife waking up in the cooling water, watching stars and finishing off our last few bottles of light beers.

The following morning we just got up, sitting at the table with the wide open hatch enjoying our coffee, watching the calm water when the guy(!) walks up with a beaming smile on his face and holding a huge jug of coffee. “Sorry for the other night. Coffee?” says it in perfect american accent. Sergio the 38 year old ex marine, from San Diego (raised by an Englishman) who lives in his car, Betsy for 10 years and lived on this beach for 6 months. We invited him up to have the coffee here in the shade and breeze with us, and from that moment we were inseparable for 4 days.
He told us how he got here, made some buddies (permanent hippy residents of the area) but likes being on his own here. He hunts and fishes for his dinner, swims across to the island to swim with dolphins, he’s got a couple of seagulls who he talks to (or swears at when they steal his fishing baits) and every now and then fires up Betsy and drives into the nearby little town. He was a thoroughly fascinating guy in-tune and respect for nature and who appeared to be the perfect wildlife survival and not doing so brilliantly in the US society.

It was absolutely great to meet Sergio and would’ve loved to stay for a few more days but the extreme heat drove us away and we were still trying to make our mind up about taking the ferry to the mainland or drive back up north and around….

Finally the decision was to drive back up. The ferry seemed far too expensive and it turned out, yes, there’s a “special” fare for tourists. So we decided to spend that money on diesel and drive around, at least that way we meet more people and have more adventure.

We headed back up north on the exact same route we came down on (at least for the first day) It was long stretch of drive but we made it for our first stop in the mind-blowingly stunning Catavina desert. Amazing desert plants and huge ones!! We parked up at the end of an unused airfield runway and had a peaceful, lovely night. 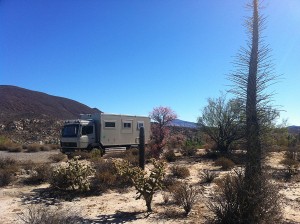 The following morning after a short walk in the desert (too hot!!) we headed to the Pacific side as we knew that the temperature is a lot cooler over there.

On our way we met a couple of surfers, Jake and Adam, a pair of brothers who were chasing the waves along the Pacific coast. We decided to stick with them for a couple of days at a couple of different spots and enjoyed watching them on the waves. Shared dinner with them and they shared their rather delicious wine with us. (Adam lives on a Napa Valley vineyard so had a few bottles of the home-made) We also met a bunch of guys from Tasmania -who couldn’t take their eyes off the waves when talking to us (apparently that’s normal) It was a fun couple of days with proper cool wind (we were craving for) and good company. I never heard John saying “dude” so much before.

The morning we were leaving Baja, got up early (though we’re never very brilliant actually leaving early) We made our way out of this coast (deep sand!) then up north on a rough-rough route that took alone 3.5 hours (only 36 km) the temperature’s gradually rising up to 49C!! All together the whole route was 450 km. It was a challenging, very hot and a very loooong day drive that John handled fantastically and without a peep. We eventually arrived at a small RV place, in Santa Clara, with a sweet-as-pie Mexican lady who made us dinner, provided a couple of bottles of ice cold beer and cool-water shower.

To be continued from here…