We are in sunny Baja, generally heading south but not sure if we want to go all the way down to the southern tip of it. About half way, there’s a port town (Santa Rosalia) so might just jump onto a ferry and sail over to the mainland (shipping is also cheaper from here than from La Paz) But we have time to figure that out. There are a few things we want to see around here so definitely sticking around for a few more days.

On our 3rd day in Mexico, driving south from San Felipe (nothing much happened in San Felipe) towards Mex 1 was about 55 km nasty, rough road where we ended up with a punctured diesel tank. Now, that’s what definitely no one wants.
The first hundred or so Km of the road from San Felipe is beautifully paved (everyone said it’s rough all the way) So we had a great time enjoying the posh, smooth tarmac road, wild-camping on the beach at a couple of lovely places. 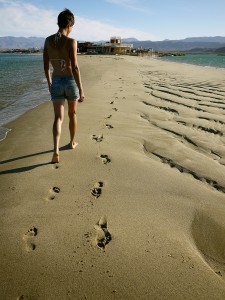 Then we learnt that the last 55 or so km isn’t paved so that morning we let the tyres down by almost half to soften the impact of the road and moved on.

We saw a car by the side of the road and we stopped to asked if they needed help then realising that actually we were the ones needing help. John hopped out of the cab and immediately noticed the leak soaking the dry desert ground with horrible diesel oil. We spent the following 3 hours in the bleaching sun pumping the diesel out from this tank to our container tank so at least saved the pricey fuel. 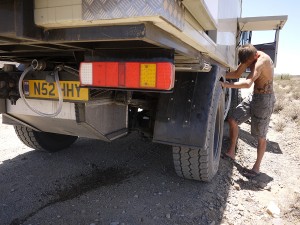 When we were done, we cleaned up the mess as much as we could and heavy heartedly moved on, knowing that there’s still another 10K of this road. Surely, we know there are plenty of this kind of roads in Central-South America and Burt has been built to take the rough impact on these roads but after this experience we weren’t exactly in the “off roading” mood.

We finally reached the paved Mex1 highway, inflated our tyres and headed to Bahia de Los Angeles a small town where we heard there’s a mechanic who might be able to help with our tank. Bahia de L.A. is in a bay of turquoise water and with countless islands around it. It was pretty and felt good to see this beauty. Actually the road was very beautiful too with unusual, desert plants, cactuses, yuccas shining in various desert-colours in the sunset.

Once in town, we bumped into the same family+friend (Mark, Mary 2 kids, 2 dogs and friend Mark) for the 4th time. We had, once more, another good chat, a few tacos and a couple of beers with them, filled them up with drinking water, for return they suggested some great places to visit and for the 4th time, we said our goodbyes.
We found the suggested mechanic but he couldn’t (or didn’t want to) help so we moved on to find our spot for the night. Emotionally (also bit physically) drained we found our camp spot for the night (A little hippy-ish Campsite: Daggett’s Beach Camping) As we’re dry camping they let us park wherever we wanted (which is always right on the beach) + Johnny negotiated a bargain $10 for the night. (he still thought it was too much :)) We had a horrendously wind-storm throughout the night keeping us awake. I thought we’re going to end up in the water!
But we didn’t. After, finally a couple of hours sleep in the morning, as nothing happened, the calm water, the blue sky, sparkling sunshine and a few squabbling seagulls greeted us. The only reminder of the storm was the sand and dust that covered absolutely everything inside Burt that we tried cleaning up -almost impossible. We had more understanding for fellow travellers in the African desert. After our morning coffee we headed off keeping the broken tank in mind. How could we forget about that…

We were heading to San Ignacio (recommendation of Mark’s) a small midland town, an oasis in the desert that has a freshwater lake with lush date palms and a Mission church that’s apparently a must see.
After a good 6 hours drive (and a bit of a dramatic Mex1 experience involving a huge 40 tonne truck lying on its side across the highway -no one was hurt) we were only an hour away from San Ignacio driving through a small community, John had a good vibe about the place regarding to fixing our diesel tanks…. We pulled up at a run-by-father+son (+1 handy guy) workshop at about 4pm to ask if this is something they could fix, arranging a day and time etc. Of course there are language barriers but it’s amazing how one can actually have a conversation with anyone, anywhere in the world and generally understand pretty much everything. Anyhow this was one of those scenarios, Johnny couldn’t even finish the sentence the guy, Jose, was already under the truck unscrewing the tank bracket. Looking at John’s face…. I mean he’s built Burt with his bare hands, sweat and blood, it was his baby and now there’s someone unscrewing things, and disconnecting the fuel lines and all!! The concern on his face was….. priceless.
In no time the damaged tank was off. Turned out the three of them (Jose, Jose and Jose) were excellent thinkers and pretty creative to solve any issues throughout the whole process. This really suits how John operates so we can say it was a good match. Although John got himself involved just to make sure things were done his way (which is always a proper good way) Approx 3 hours in, by the time this tank was fixed and they moved on to the 2nd tank, (we wanted to strengthen this one too before disaster happens here as well) we were sitting around practicing our Spanish, their English, drinking a couple of cold Mexican beers and joke around, while the work was still progressing. And I think that suited their way of working. Even that Johnny’s got his hands dirty also made sure our super-duper aircraft glue was used to fix bits they didn’t mind his input at all -in fact I think they learnt a couple of tricks too.

The 3 Amigos; Jose, Jose and Jose (and their friend)

By 8pm both tanks were fixed and done. Hurrah! And we just had enough time to move on and get to San Ignacio before dark. Although the nice Tres Joses offered to park up at their workshop if we needed to. This was very nice of them but we were so close to our destination so after settling the deal we thanked their help and offer and we moved on.

By 9pm we were sitting on the patio of the restaurant of our RV park, enjoying a couple of nice cold beers, some fish tacos and listening to an amusing conversation about ice cream of folks from Birmingham (first time in 6 months hearing English people!)

In the next day or so we’ll be going to Santa Rosalia where there’s a port to find out prices and ferry time so we can make a decision to ferry over to the mainland or drive back up.