OK, here we go; Joshua Tree is one and only place in Johnny’s world that has ever got the title “my favourite place on Earth” Now, Johnny doesn’t give these titles easily, the place has to earn it. (He’s been here 5 years ago for a few weeks, climbing, hiking and such so had a solid foundation of his statement)

We’ve been scooting around in the state for over 3 months and been to really great places and met wonderful people. We meant to cross the border for Mexico probably 2-3 weeks ago but we always thought we had to go to Joshua Tree before we leave the country and I guess, also conveniently as being right south, we wanted to leave the best for last 🙂

But before I get to telling you about Joshua Tree, here’s something life brought to us (again). We travelled across this area back in March (on our way to Arizona) so we knew a good spot for the night (BLM land along Hwy 274 south of Barstow), and a sweet little cafe (Cafe 274 in Lucerne) for breakfast before we get to Joshua Tree. In the morning we set off and headed to Cafe 274 for a homemade breakfast and coffee. Here we bumped in to the same man, Ray who we met back in March and thoroughly enjoyed his company. With a big cheer, we greeted each other as old friends and he sat down at our table. Ray is really a ray of sunshine in anyone’s life. He is a very good-hearted man with a kind smile and the most optimistic belief in life. He rescues horses’ lives from places where they’ve been badly treated or neglected. He runs his own business from his own strength and support on a land where water and vegetation is seldom but this old cowboy lives and breaths horses and this morning he just lost one. Through his kind smile we saw his long term fatigue pain and we let him talk. His positive view on life shone through the conversations and we were just happy sitting there and listening to him for a couple of hours. For some reason, we bumped in to Ray twice, though we only had a chance to enjoy his company for a short time on both occasions, he sure touched our hearts. After this pleasant two hours he said goodbye and drove off in his old Bronco. 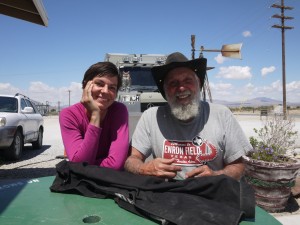 We moved on as well after breakfast (which was more like lunch) and reached Joshua Tree in the mid afternoon hours.
Johnny found a pretty good sounding RV park in Joshua Tree (the town) We had some domestic duties (cleaning, washing sheets, filling up with water and stuff) so a couple of nights in an RV park is in order. Besides it really sounded brilliant -Peaceful sites, Mojave desert night sky, water, lake, ducks, facilities in good condition etc (Joshua Tree Lake RV Park) And on our arrival, everything was as promised + friendly owners. There were 3-4 RV’s already parked up there but the site was huge and we tucked ourselves away in the far corner so it was peaceful and quiet. We planned to stay a couple of nights here then one or two nights in the National Park then head south to the border.
On our first day, after being busy with cleaning and tidying I left Johnny touch up a few things on Burt while I went to hang out by the lake for a few hours. Just chilling out with the ducks.

Later that evening John said that we had a visitor earlier, Bill -one of our neighbours, and he will pop over for a beer soon. And there he was, Bill From The Ville, with a larger than life personality, with energy of a golden retriever and with huge appetite for LIFE. He absolutely loved Burt -that was the thing attracted him in the first place, though not having much sense or interest in the mechanical background of the vehicle, it was actually a fresh breeze of air for a change not to explain and get into endless technical details (no offense :)) Bill had a wonderful sense of humour, a deep interest in us as humans, a generosity to share part of his life’s stories and a pair of eagle eyes for a photographer/ documentary filmmaker.
Bill is from Kentucky and is here to document the 11th Joshua Tree Music Festival that his childhood friend organises right here at this lovely spot in the Mojave Desert in about 10 days time. This year he came 2 weeks early to make sure he had good “making of” shots setting it up, and was staying in a “borrowed” RV. As a man from Kentucky in the Mojave, he had amusing stories about this experience such as; one windy night his RV was rocking so bad he rather spent the night sleeping in the men’s loo sitting upright on a camping chair!

He told us about the festival and about the people involved who are organising, designing and setting it up with such love and enthusiasm. He happened to mention that they could do with some help and they welcome volunteers. I could see the twinkles in John’s eyes who said “well we have tools, Betti likes painting, we also have a couple of days to spare so we could offer help…”

And we did. OK, it wasn’t such a straightforward decision (we thought my visa was running out and have only a few days but that’s just one reason) Johnny and I love discussing everything, analysing, discussing more, sleep-on-it, and talk it over again. As almost everything in our lives this topic was like that too. “Shall we do this or shall we just move on as planned?” One minute we felt this way, the next that way. Some point I felt moving on and John the opposite then the other way round.

Before everything, as we planned already for the following day, after Bill’s visit we scooted into the Joshua Tree Park for hiking, climbing and general chilling. We found a sweet little spot in the furthest campground. The park, the trees, the boulder rocks, altogether the view and atmosphere was spectacular. 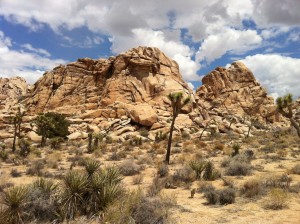 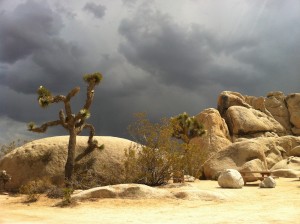 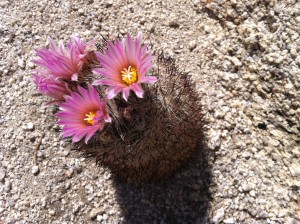 We love the desert plants.
JT National Park, CA
May 2013

After a day hike we returned to our spot and found that we weren’t alone anymore. On one side we had a cheerful couple of families who we ended up sharing the campfire with and on the other side was a bunch of college kids arriving around midnight when as far as they concerned the start of the party time was and didn’t stop till laaaaaate…
Anyhow the following day we turned up at the work-in-progress festival site, introduced ourselves to Barnett (the main guy) and immediately we had duties. 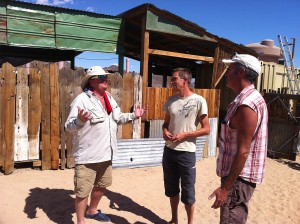 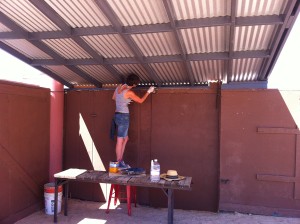 We loved being involved and being busy, productive, helpful and all. It felt good. Johnny and I thought “let’s take this day by day, then we can decide if we still want to stick around for the actual festival” It is an experience itself just to get involved and we were already making friends which was fun. From this point, taking each day as a new decision saying each evening “Let’s turn up for 9AM and see if they still need us, if not we just move on” And each day was followed by another 9AM start. 6 days later we were offered 2 free tickets and a prime camp spot backstage in the hub of the organisers and all the new friends.
And guess what… the night before the festival, John and I were sitting in Burt at the supermarket’s carpark discussing if we should stay!! Eeeer…. how much signs and arrows pointing at the obvious direction did we need???

Finally John said “Something great is going to come out of this” I felt he was right. He turned the engine on and we made a left back to the festival site.

When we arrived at backstage taking our spot a huge cheer greeted us from Gareth, Chris, Travis, Al, Kali, Barnett, Lynn, Sarah and people who we didn’t even know but they heard about us. From that moment on we were part of the gang and as Bill said “and this, my friend, is the MOJAVE MAGIC”

One of our finest decisions yet. Eventually I checked my passport, my visa was good for another month. We decided to stay for the tear-down and an extra 3 days with some of the guys who also weren’t in a rush so had some quality time with our new friends.
We came away from this experience with 2 things. 1; trusting our hearts, knowing it only brings GOOD. And 2; Friendships for LIFE.