We are starting to have a sense of distances here in South America. It took us two days to get just to the bottom end of the peninsula, La Guajira. We had two nights on different beaches on our way.

We just did a big grocery fill up in the last bigger town before reaching the desert when we spotted a hitchhiker by the road. It turned out he was heading to Cabo de la Vela, a small beach town on the peninsula which we were aiming to visit as well so we offered to give him a lift.

Remi, our travel companion is 24 and from France. He lived in Colombia for a year and travelling around, making money out of working on building sites, making and selling bracelets and necklaces and play music. He spoke excellent Spanish and strong enough English to have conversations. He was a free spirit but knowing exactly what he wants to do in his life and working towards it.

The peninsula’s length is approximately 160km. The first 40 km is a dead straight reasonably good paved road that leads  to the only town, Uribia with facilities such as fuel (you better fill up all your tanks here because you don’t want to get stuck in the desert) electricity and a small market. We topped up our diesel tanks -at the pump station which was a bit daft though we didn’t know that the roadside sellers’ diesel is perfectly good and less than half price. They getting the fuel from Venezuela and selling them from jerry cans.

The route was quite fascinating. After we left Uribia the paved surface on the road started to fade and become quite rough so stopped to let air out from the tyres to ease out on the harsh rattle of Burt. As John was working on the task Remi and I were entertaining the locals who constantly stopped asked if we were ok. One of them told us a better route to Cabo de la Vale which was supposedly faster and shorter at least by an hour.

We took his advice and turned off at km 103 as he advised, though I wasn’t sure how this will be “faster” as now there was no road at all, only tyre tracks we could follow through the cacti forest. It looked quite epic with its dryness and faded colours. We blindly followed the instructions and soon we were amazed how the scenery changed. We found ourselves on a vast salt flat that was smoother than a highway so within 10-15 minutes we made 20 km progress and were nearly at Cabo. In the last 20 minutes we were back to a cacti land which was very slow but the track lead us along the turquoise Carib beach dotted with small wooden fishermen sheds.

We arrived to Cabo at around 5PM and drove through “town” between the wooden sheds just to familiar ourselves with the town, get a feel and look for a place to stay for Remi.  Cabo de la Vale, The Cave Candle once a fishing village is actually one of the best kite surfing spot in Colombia. It has shallow, calm , warm water and constant wind from one direction. Perfect predictable elements for pros and beginners so  it is a popular spot amongst kite surf lovers. Though the place only had just the right amount of outsiders as this spot is remote and is hard to reach.  We stopped at the other end of town at a small beach bar. Immediately we had people around us asking about Burt and our trip, some locals and some travellers/surfers and some beer came out we found ourselves getting lost in conversations. We met an interesting British guy and a couple of Colombian girls, all surfers who we were enjoying having a few beers with. 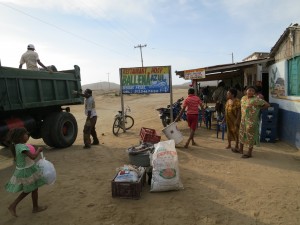 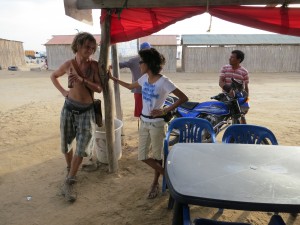 It was getting dark so we needed to find a spot and Remi decided to come with us, instead of staying in a hostel he could sleep in a hammock. Within a couple of minutes just outside of town we found a spot with a palapa that was perfect for Remi. Asked permission from the nearby family, parked up and walked back to town to find dinner and to continue our chats with the people we just met. It was a nice evening. 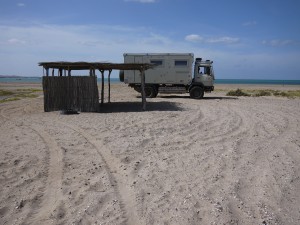 The following morning John and I decided to carry on to the north tip of the peninsula, called Punta Gallinas (Chicken Point!) Our free-spirit friend, Remi asked if he could come with us as this is such a great opportunity for him. Of course it was not a problem, we were happy to have him on board, we  had enough food and water for three so straight after coffee we set off and headed back out of town.

In town the night before everyone said we shouldn’t go out on our own because it is very easy to get lost. It is a vast desert with hundreds of tyre treks and it’s dangerous without a guide. We even met a guide who offered his services but we have a GPS (plus mapswithme on my iphone) that both have, quite incredibly, the marked treks right up to Punta Gallinas, also somehow a journey like this on our own feels rewarding.

We knew we had a long day drive ahead of us so we prepared ourselves, timed a few stops for breaks but still thought we will make it in one day. There was no way carry on north from Cabo so had to drive all the way back to the “highway”. As on the map from town to the highway the straight line looked a lot shorter than how we came yesterday so we took that one. Always listen to the locals. As the guy who suggested the faster route was right. This one took an hour longer through the cacti land with huge potholes than the long route through the flat land. A couple of hours later we were only just back where we started yesterday and it was already 36C.

We had 7 hours drive that day. Our GPS, cross-checking with my map on my phone was unbelievably accurate so we did not have any issues. The journey was pretty bonkers, it lead us for endless hours on bumpy, incredibly slow dirt roads through the cacti, sometime through tiny indigenous communities of 3-4 wooden shacks every now and then stopped by locals asking for road tax of 500-1000 pesos (25-50 cents) or sometimes only for a cup of water to drink. 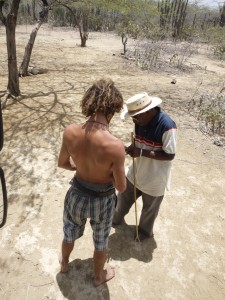 Then it turned to salt flats again so we could speed up for 10-15 kms, then back to the cacti, then all of a sudden the scenery changed to something that we could imagine the Moon’s surface would look like. The only animals we saw were goats and small lizards running away from Burt’s rumble as we were approaching. 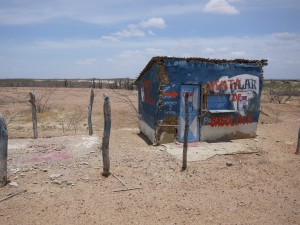 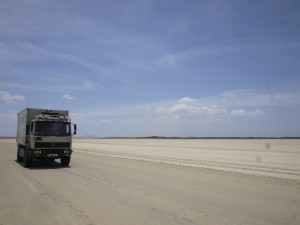 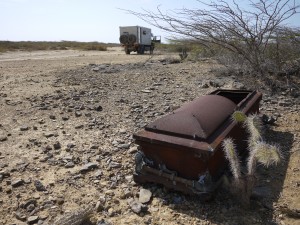 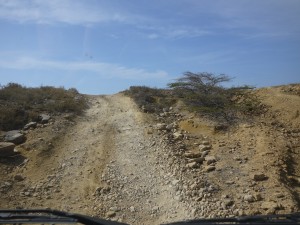 We found the northernmost point with its lighthouse and a shed and decided to spend the night there. Remi chose to sleep in the shed in a hammock and after the whole day drive and an early dinner we took an early night.

The following morning we had a fisherman visiting and greeting us. He was very friendly and told us to visit the sand dunes a few kms down the road as that is a better spot for swimming. He didn’t believe that Remi spent the night in that shed, he said it was dangerous as it is falling down and it’s full of demons -I was guessing he was talking about the spirits of the two dead goats John found the evening before there but didn’t tell Remi until the morning. All of these didn’t seem to bother him as he said he slept like there’s no tomorrow.

We visited the dunes which looked great but the heat and the wind was something else. We couldn’t stand up straight from the wind and we all got burnt even we had sunscreen on. After a short swim in the wild water we decided to find another spot for the night and drove a few miles to find the only hostel Luz Mila. Remi had a good deal for the night there and even got to speak French with the handful of French visitors who spent a couple of days here. (they arrived on a boat!)

John and I found ourselves a beautiful spot on a flat area right next to the inlet Punta Gallinas was named after. Apparently from a bird’s view it looks like a chicken foot print. The hostel was up on the top of a cliff and had a fantastic view of Burt’s spot. So we found this wonderful spot, parked up and walked back up to the hostel for a game of card with Remi and a few cold beers. We still had enough food so cooked for the night for all three of us and had an early bedtime again. It felt right to head back tomorrow and agreed that after an early breakfast we’ll push on and try to make it all the way to the Venezuelan border to drop off Remi.

The following morning John and I just had our coffees and fired up Burt to get up to pick up Remi. We drove slow as the engine was still sleepy and we got ourselves stuck in to a deep, sticky, salty mud! We were somewhat experts by now with mud (though this was heavy, hard and sticky) and started immediately planning a strategy how we’re going to get out of it.

After not turning up on time, Remi saw us from the cliff and got down to help us. As usual, first it seemed “fine, we’ll get out in a minute, then was endless digging and realising how deep crap we are in and won’t get out of it anytime soon, then I wanted to cry a little, then dug harder and more and deeper then all hope returned and bang! 4 hours later we were out. There’s a fantastic rewarding feeling when I see that every little difference we made works and John’s great skills joint with Burt’s strength gets us out of the pickle.

It was after midday when we cleaned up, put all stuff back (spare tyres, jerry cans etc) and set off. The journey was slightly painful as we were all tired and driving for endless hours in the heat didn’t help, but somehow the trip seemed shorter, even that it was slightly longer. We found a good spot for the night near a family home where we asked permission to park up and once again, Remi and John set up a nice spot for him with the hammock and had an early night.

The next day we set off early, filled up with the cheap diesel for the men on the side of the road and reached the border by the early afternoon hours where we said goodbye and wished good luck to our new friend. Hope to see him again in Ecuador.

John and I still had a good shot of getting to our aimed destination before dark so we pushed on. It was wonderful to get to the town of Valledupar though we haven’t found a supermarket to fill up but we found a friendly roadside restaurant just outside of town with good food and cold beer plus they let us park up for the night. As we were sitting in this open cafe the an amazing tropical rain fell with unbelievable amount of water which was amazing and cooled the scorching hot air. This was our first rain since February. All together it was a successful day and we found the perfect place to have a rest before we pushing on to south. Result!

Next, getting to the mountains.