From Tikal we had one more night in a near-by village by its lake. It was actually a perfect little spot for a night, quiet and peaceful. The next day we visited Flores which was the other side of the lake and we heard nice enough things about it so thought we could give it a go. We got there in no time, but we didn’t like it as much so decided to head south towards another lake, Lago de Izabal. We knew about a campsite on the way, Finca Ixabal, so we knew if we won’t make it to the lake by the end of the day, we’ll still have a place for the night. We arrived late afternoon/ early evening. The lady who runs the place spoke very good English and let us know where we can park up. The place has cabanas, wood-houses, it is a small working farm of growing vegetables, has a few animals. There is also a cafe/self-served restaurant with freshly baked products, a nice chill-out area with wifi, few options for hiking and walking. Overall a very pleasant place to stay for a couple of nights. Needless to mention, as it was still the rainy season and the ground was wet and slippery we got stuck and for a moment it seemed like Burt’s going to end up in a small pond. But a well-thought-through plan, some digging and the use of the sand-ladders did the trick and we out! we were of trouble. All these at 9PM, in the dark and before dinner which makes me slightly more cranky. But it was a huge relief  to be on firm ground again and after cleaning up our mess and mud, we treated ourselves with home-made burgers, chips and beer in the cafe with two lovely French couples. We stayed here two nights which was great and could do a short hike up to the top of an super-overgrown Mayan pyramid.

Hike up to the top
Finca Ixobal
December 2013 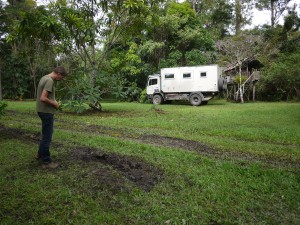 The following day we were ready to move on to Lago de Izabal. Again, we knew about a place right by the lake to stay. Though by this point John was getting a little bored to follow other travellers’ waypoints and campgrounds and was ready to do our own discovery. Regardless, we went to have a look at the lake-side place. It seemed we couldn’t fit through a gate that leads to the lake beach. Our only option was to stay back and park up next to a restaurant and they weren’t shy to ask a hefty amount for the one night camp. We thanked and drove off. Just the other side of the road we found another restaurant that let us stay for the night for a much more reasonable fee with electricity hook-up. But the real attraction was the hot-waterfall which was owned by the same family who owned the restaurant. It was a 10 minutes easy hike to the waterfall and it was really worth it. Very beautiful and authentic place where the hot water falls into a cold river creating a very pleasant pool to hang out.  John would’ve wanted to stay one more day/night here and enjoy the hot water again but at the end we decided to move on.

We kept hearing about Samuc Champey as one of the “must visits” in Guatemala. We decided to drive to Samuc on the less-driven road from Lake Izabal. The whole journey was about 60 km but we couldn’t make it to Samuc before the end of the day. The road was very demanding, narrow, at places steep and full of rain-wash cracks or if not the cracks then animals or people walking across unexpectedly, but if not these then a 24 meter long truck coming from the opposite direction. It was certainly entertaining. It was getting dark and we knew we were still about 20 km away from Samuc and judging by the progress we have made after the whole day drive we were looking for a place to stop up for the night. I wasn’t very easy at this point, mainly because all we keep hearing about Guatemala is danger. Perhaps more so than it was for Mexico. John was getting fed up with these second-hand infos, quite rightly, but I am a cheap audience who believes more than I should. So considering the circumstances -being tired, hungry, thirsty and slightly uneasy about things as soon as we were driving through another village I was looking out for a place. And finally spotted a run-down little “hotel”. I jumped out to ask the usual questions. It seemed that the “hotel” doesn’t function as a hotel anymore but the family let us park up and stay for the night anyway for a small fee. The next morning we only had 20 km’s to drive but it took 4 hours to get only to the turn-off which was a town, called Lanquín. From here, after we took a hitchhiker, in a 13 years old boy form we headed to our final destination on an even narrower and steeper road with a falling-apart wooden bridge that made it almost impossible for us to turn on to it as the icing on the whole journey. David, our little friend, in a cab was tiring to make conversation with us in Spanish. We found out that he is from Lanquín and goes up to Samuc almost every day to have  a swim. And finally we were there, at its car park, heaving with 6-7 year old little girls and boys trying to sell Mayan chocolate. Some of them were very sweet and asked our names, then I asked theirs and they loved Burt. We got to Samuc close to closing time and we found out that we can only allowed to park overnight in the car park. It wasn’t awful but it was pretty underwhelming, driving for two days on these difficult roads to get here just to stay in a car park. Hm. We paid our fees and the entrance fee to get in the park before it’s closing for the day. We had a chance to walk up to the viewpoint and have a quick plunge in one of the pools. It is a very pretty place but not sure that the whole effort worth it. 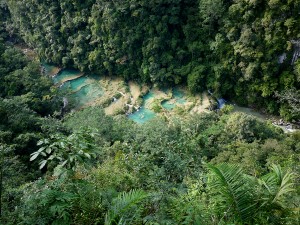 After closing we strolled down the road to a backpackers’ place with a bar with a view of the river and had a couple of bottles of beer and chatted with a traveller. Then on our way back to our camp spot I heard my name followed by giggles. We looked towards the source of the sound and saw the two little girls under the trees having their evening bath in the river. They were very sweet and playful and giggled away. They were just calling my name, “Betti, Betti… holá!” then one of them remembered John’s name and called out; “Otto, Otto, holá!”  We started laughing and I said that he was called Juan. Now that caused a great joy and more laugh.  I was very impressed that these little girls remembered my name even that got John’s wrong and at the same time I felt a little embarrassed that I forgot theirs. The next morning I wished I saw the girls before we left to give some of our little give-out stickers and balloons but all the chocolate girls and boys were vanished. Samuc was somewhat a little disappointment but I’ll never forget those little giggling herberts calling my name.

In the morning we packed up and headed to Cobán, a bigger town with facilities, shops, bank and all as we needed to stock up things. Cobán really isn’t a pretty town but has the essentials and actually has a small park where camping is allowed. From the park it’s just a 10 mins walk to the centre. We sorted everything out here in a day then moved on towards the northern highlands.

John thought we should have our own route now and he had a plan for us.

Next, Nebaj and Todos Santos