I know I said at the end of the last post that “Next, Bolivia…”but that is not how it happened. This kind of shows how we don’t plan.

After we said goodbyes to our travelling friends of few weeks, we hit the Panamericana and headed south. 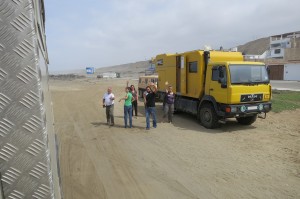 A few days later driving through desert we were at the southern part of Peru, and against our “plan” -which was to enter Bolivia the following day, visit La Paz and, the Highlands and the Salt Flat, we actually decided in 10 seconds to cross to Chile instead.

We were so not prepared for the sudden border crossing that we had to ether cook up a lot of food and stuff ourselves or throw good food away as Chile doesn’t tolerate any fresh veg, fruit, meat, cheese, honey etc to bring across the border. It was a shame as turned out the border officers were in a laidback mood and had a very brief look at our truck and let us through. They couldn’t be friendlier and more helpful.

I loved Chile already. It was sort of refreshing to be in a more organised country. Which came handy when we left our credit card in a cash machine in Arica and the next day at the bank had proper costumer service for these kind of accidents and we got it back. Wifi everywhere, great wine for peanuts (otherwise everything is quite pricey here) we even found Waitrose Finest in the supermarket! English Breakfast tea, English mustard, shortbread biscuits and a few more stuff. What a treat!

We stuck with the PanaAm and headed to Iquique to the tax-free zone to get a new Michelin tire that we lost in Venezuela back in May. In Peru we found the right one for us but was insanely expensive so this was our main motivation to get to Chile instead to Bolivia -at least for now.

Iquique is a coast town with a character. It has a tax-free zone where apparently one can buy everything from used cars through sunglasses, camera and computer stuff to designer socks. It also has lovely purpose-built town beaches, wooden buildings and wooden footpath, cafes, bars. Iquique is also a favoured surf spot and one of the best paragliding places in the world. It wedged in-between the desert and the Pacific Ocean with the biggest sand dune that is famous of its Dragon-like look and for not moving for hundreds of years. (which is good news for the residents) 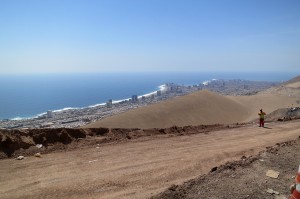 As far as our non-planning goes we, of course arrived on Saturday when everything was closing (nothing’s open on Sunday) so we had to wait till Monday for sorting the tires. We found a spot on a public beach just north of town (not too bad but lots of rubbish sadly) and spent Sunday in town. 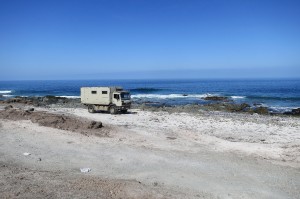 On Monday we visited all truck tire places and got quote (all Chinese or Korean tires) but at the end we ended up at Michelin where we met one of the most sweeties, Roberto who helped us enormously.

At Michelin was where John discovered another(!) crack on the chassis. Not even my eyelids moved (though I was crushed inside) Roberto pointed us to the right direction to get help. Which was the Mercedes service who sent us to this company in town who deals with chassis welding, repair etc. We booked-in for the next morning.

For that night we decided to stay at the Paragliding Club and where we met 4 Brit paraglide pilots who just arrived from England to warm up in the next few days before their students arrive. They were so friendly and happy to meet us. They provided dinner and wine for us and we ended up chatting till 1AM. Shame we had to leave early the next day due to the bloody cracked chassis but it was something we had to sort it out ASAP. 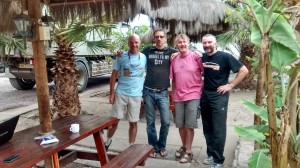 The 4th guy is so hungover the next morning, he fails to attend for the group photo

So, another workshop… In the place they directed us to our spot. They begin the work and with John’s supervision disconnected the box from the chassis then removed the whole living-box and placed it on work stands. 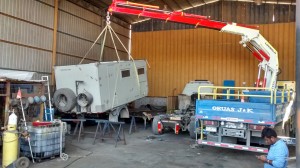 It was a busy shop with lots of welding and metalwork, and despite we thought we will have to stay in a hotel in the next few days they let us stay. Which was very helpful but it was a nightmare. What we didn’t realise was that they have night-shifts that love to put the bloody radio on all night full blast. I could’ve cried! But was still appreciating the cost-saving side of it and just had to use earplugs. (when I politely asked to turn the music down a bit, they refused)
And of course we hit a weekend (again!) when, on Sunday they don’t work (except the nightshift with their beloved midnight-hour Top 100 of Chile) so we were there for a whole extra day doing nothing. Well, actually on Friday I managed to get their wifi code and we were shamelessly downloading stuff all Sunday, plus I made good friends with the three -otherwise vicious guard dogs (enormous German sheps) -after a few well directed beef chunks they became sweet little lambs and they provided entertainment for Sunday afternoon.

Finally, on Monday they finished the job and by the end of the day they replaced the box onto the chassis. It was stressful and frustrating though. They had good equipments but loved hammering the bolts when using the air-driver would’ve done the job in minutes without damaging the bolts themselves. John asked them to use the driver but they refused and kept lump-hammering. It took hours when they finished (forgetting placing a few bolts back that we will have sort out in time)

Having said all that they did fix the crack very well. They fixed and reinforced this part of the chassis but they did a sloppy job with the other stuff involved that we will have spend some time and money to fix. Plus, including the Sunday it took 2 more days that predicted and caused a fair amount of stress. So after we paid we were happy to leave, even it was already 8PM. We found a snug place in the desert and took an early QUIET night.

The following day we headed to Michelin to pick up the new tire we ordered. It was so nice to see Roberto and his smiley face again. 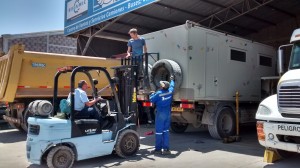 It turned out he looked at our blog and recognised the Moroccan family (who we made such good friends with in Cusco) He said they were here a few months back and how nice people they were. Which is absolutely true and I was wondering; isn’t it funny how the wonderful cosmic misfits gather in the same place…?

Thank you Roberto for your help and kindness. 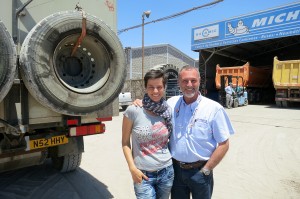