We spent 3 really good days at Posada Los Pinos in Santa Elena. The town is a backpacker-friendly, tourist oriented place with lots of shops (Brazilians come frequently here for shopping) cheap backpacker places, tour operators and wifi. So we parked up at Eric’s place but spent the afternoons and evenings in town. The first town in Venezuela where you don’t hear the warning “peligro”. Apparently 80% of the population is Brazilians and it’s a pretty laidback place and everyone is friendly.

At the posada each day we met another person and we loved the time we spent with each of them chatting over breakfast or over a few beers in the evenings. A German business guy, a Venezuelan tour-operator (just came back from Guyana and really sold it to us) and an bright and fascinating young Aussie backpacker. Not to mention Eric the owner of the posada who is very nice and helpful and offers tours around the Sabana.

Absolutely loved these few days and could’ve stayed more but it was time to leave. We want to visit a fascinating place for a few days before we leave the country.

It’s called the Abyss (El Abismo) and it is 100km west from Santa Elena. El Abismo is basically the (southern) edge of the big plateau. You can sit at the edge of this plunging drop and down below ahead of you is Brazil and the Amazon rainforest. I remember seeing a photo of a traveller sitting on the cliff that made us wanting to see this. A point of view of the Amazon not many people get to see from. We didn’t want to miss this.

So we set off town early afternoon and headed west on a graded dirt road that first lead us through jungle forest out onto the rolling steppe. We left late and we took it slow so for our first night camp we found a nice spot only about 60km in, by a little side road. Apparently the whole area is divided up and all land is private -though there are no fence or any sign of it. We didn’t see anyone to ask for the night park but it seemed OK.

The next morning we reached El Pauji, a little hippy town famous of its local honey, growing foreign population and good hikes. From here it is possible to reach the abyss but only with a guide. We were tempting to stop but it was still very early and at the end we decided to keep on going. Eric (our German host back in Santa Elena) recommended his friend’s place to stay for us, and it was another 40km further on.

The road was rapidly deteriorating. Huge cracks, I would say smaller canyons appeared in the road that was becoming steeper and narrower at places. 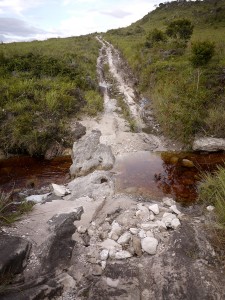 We also had to cross a few smaller rivers that I assume becomes more of a problem in the real part of the rainy season. (we are already in the rainy season but there are no floods yet) We were very slow that day so decided to stop again in a similar fashion as yesterday. I walked down on a small side road to check the quality of the road, if we can turn around etc and find a spot well enough away the road. Once we decided it was OK we parked up, went for a walk and had an early night.

The next morning we woke to a guy knocking on our door asking who we were. We told him that we are tourist and only parked up for the night and will be leaving soon, it was OK. Turned out the whole area was his land, he was just surprised to see us there. But it was fine and he left. John got more annoyed than by the fact that there is no indication of the private area, but I guess that’s how it goes here. Everyone knows everyone, they respect each other’s area so there is no confrontation. Independent tourists with a vehicle appearing on a road out of the blue, frankly can raise questions. The funny thing was that later we found out that this guy and his wife believe in UFO’s (they even run a little UFO theme hippy cabana place) so I could just imagine his amazement when he first saw BURT…

It was Johnny’s birthday and with our UFO guy appearing early in the morning we weren’t in the mood of celebrating yet. We had our morning coffees and moved on. We knew we are getting close to the place Eric mentioned though John didn’t remember the name exactly, also we were running out of the area where it is possible to walk to the abyss so we were looking out for a place to stop.

Only in a hour or so we reached a sign; Kuyaima Camping. We stopped and walked up to the house. We were aware that it is the middle of the low season and some of these camp/posada places aren’t open so we weren’t sure they are up for guests. We found a young man on the ranch and we asked him about the possibility of parking up, and if we are able to walk to the abyss from here. He lead us to the big house where he introduced us to his mom, Tamara. They both speak perfect English (their main language is German though they were born in Venezuela) First they were shy but very friendly and Tamara said that the camping area is run by her daughter who isn’t here right now but as we don’t need anything we are welcome to stay for a small fee. After a few minutes small-talk and introduction she offered dinner too if we wanted for a reasonable price that we gladly accepted.

Ralek, Tamara’s son took us around and showed us where we can park up on a large grassy area with gorgeous view and offered that he’ll show the beginning of the trail to the abyss whenever we’re ready. We parked up and got ourselves ready for a hike. I remembered we still had a bags of wheat flour (we stocked up on it in Colombia as it is very hard to buy in Venezuela thinking we can give away to people) so I packed up the remaining 3 bags and on our way to the hike I handed it to Tamara. She was so happy and grateful for the precious gift. It was nice to see how happy she was receiving such simple thing.

Ralek lead us up to a plateau crossing a small waterfall and showed us the direction we had to carry on going. 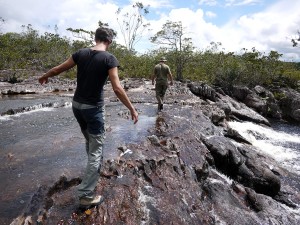 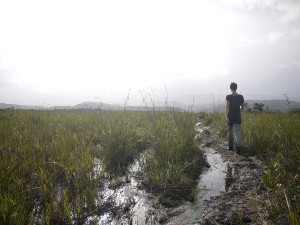 It took less than an hour to reach the edge of the cliff and the view was spectacular! 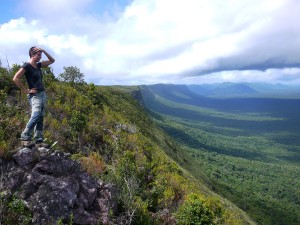 Instantly became my favourite place we have visited (probably in my life) We sat on the edge of the cliff and were practically speechless for moments as we were admiring the rainforest 400 meters below and in front of us. We even had two very noisy macaws greeting us somewhere in the forest having their voice echoing throughout the abyss. Eventually they took off showing themselves to us flying across above the jungle. It was very special. It was a very special place.

We took our time but got back just on time for dinner. Tamara made a wonderful dinner and as we finished the chicken she presented a gorgeous strawberry cake. It was one of those moments when somehow everything “fitted” together. Suddenly it occurred to us that it was John’s birthday so the cake become more special and “purposeful”. I also found out that Tamara loves baking. She bakes cakes and cookies to a little shop in El Puji for sale. I felt our flours made a real good home. We ended up chatting with Tamara and Ralek for a while and we decided to stay one more day, and perhaps walk up to the abyss once more tomorrow.

The next day it was absolutely pouring down all day so nothing happened but over another gorgeous dinner and nice chats with our hosts we decided to stay one more day. Tamara said it was Father’s Day and they are going to visit her father -who lives on the next ranch and we are very welcome to go with them.

The next morning after Tamara and Ralek showed us around on their farm having a wonderful chat for ages, we jumped on their Toyota pickup and headed to Grandfather’s house. It turned out his place was the posada that Eric recommended and as much as they were very sweet people too we were very happy staying at Kuyaima. Here we met further family members, all absolutely lovely people. After this we visited a friend on the next ranch, a very nice Italian guy who invited us for coffee in his gorgeous house. Then an hour or so later we headed to Tamara’s ex husband and his family house. His is a bee keeper and makes honey. We met his wife and two lovely boys, showed us around his farm. He is British-Venezuelan and was delighted to speak English to an English. We got some delicious honey from him, drank some of his honey-wine and had papaya fresh from the tree. They were all so very sweet and welcoming, Tamara and Ralek treated us like family and we couldn’t be happier.

After this lovely day we thought we give them family time and Johnny and I walked back which took just over an hour and was lovely in the sunset. We just had enough time to have a dip in the river, as we did every day since we got here before dinner. Tamara decided to have BBQ together. Ralek made the fire and very skilfully roasted the chicken while we were chilling with beers and continuing our never-ending conversations.

They are wonderful, gentle and universally wise people who so trustingly welcomed and opened up for us sharing a tragic family story and the beautiful way they look at life. It was truly moving and inspiring, and I can speak in John’s behalf too when I say we both felt so privileged to meet them.

We stayed one more day and visited the abyss once more which was such a confirmation of my favourite place on Earth. In a different light and with the mist looked so haunting and powerful. With a gentle sadness in our hearts yet with a fulfilled feeling that this journey was so worth it, we decided to move on the next day. It just felt right leaving Venezuela. Had one more evening with our hosts then coffee in the morning when they surprised us with gorgeous leaving gifts. Such a wonderful surprise.

I don’t know how life works, and when you have a second chance to meet people, we once connected with, again. Maybe sometimes we have that one shot but we can hold on to the memory of them. I sure never will forget Tamara and Ralek. 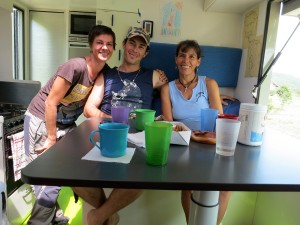