We were looking forward to the Gran Sabana since the beginning of Venezuela. Just reading about it made the place not to miss. We couldn’t, even if wanted to, as the Gran Sabana is the gateway to Brazil.

The Gran Sabana is an elevated (approx 1000m high), flat plateau grassland on 35.000 sqkm that extends southeast to the Brazilian border. It has a unique flora and fauna due to the special climate and the scenery is unbroken by any agricultural sight. Because of the slight elevation there’s a very pleasant temperature in the evenings and when it’s cloudy in the day but when it’s sunny the sun is seriously strong. The entire savannah is dotted with its signature tabletop mountains (tepuis) and has over 100 waterfalls and rapids. It feels very empty and remote but in the 35.000 sqkm there are about 300 tiny indigenous villages and its largest town is Santa Elena that is located south, near the border. The only inconvenience in the whole place are the tiny biting flies (puri puris) They can ruin a wonderful moment.

So after our stay at the hydroelectric company we headed to Upata the last city with fuel station (for tourist, anyway) to the Brazilian border (500-600km from here) We filled up with fuel and discarded our slashed tire here. The town isn’t a sight in any stretch but was a little complicated to find our way out -kept bumping in to street markets and narrow roads so we got a police escort. Then we headed straight south on the one straight road that leads from here to Brazil, through the savannah. We assumed that we won’t be able to make it to the edge of the National Park this day but knew of a campground/cabana place owned by a Swiss guy so aimed to get there by the end of the day.

We found his place with no problem. It was great grassy, palm tree filled area by a river with a bar and restaurant, looked usual as all these camp places. The owner, Bruno wasn’t there when we arrived but there was a German and a Swiss guy helping us showing where we could park etc. 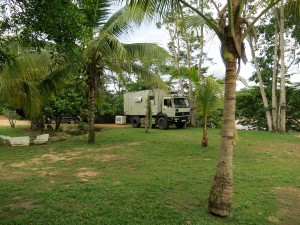 We had a couple of beers at the bar with a few military guys (they are much friendlier when not on the road) Though the place seemed a bit unusual and we found out why.
As we were enjoying our cervezas met Bruno, the owner. He didn’t speak English but was friendly to us, he introduce himself and said to enjoy his place then off he went to his business. He had a certain aura. We found out that Bruno is an ex-colonel for the Venezuelan army and still is highly respected in the area.
First I just thought the military likes to come here for a few drinks after duty but this place in fact was a military river-checkpoint and these guys were on duty. They were here to “control” the river traffic. Let me tell you just this much; This river was the perfect avenue for the Venezuelan fuel make its way to gold and diamond mines in Guyana… I can’t tell more but John was delighted!

The next morning we had long morning coffees with the guys (they had cognac and cigar for breakfast, we had coffee) and had a great chat. John was mesmerised and even got to watch how the barrels make it on the boats… This was a real unusual place, everyone was friendly and the whole place had a fascinating story. We were very tempted to stay one more night but we needed food and essentials, and as we were driving further and further away from the Swiss place in search of food, somehow it seemed right to keep continue south -we still had a long way ahead of us. On our way, as usual, we bumped into a few military checkpoints and instead of starting our usual statement “we are tourists from England….” all I said was “we are coming from Bruno’s” The guy just flagged us through without a blink (first time in Venezuela!!) It worked for a couple of more checkpoints and we loved it!

By the end of the day we made it to the “wall” of the Sabana. It was leading up steep through a forest, feeling the temperature dropping by 10C. Half way up we found a perfect bushcamp area and decided to stay there for the night and finish the climb the next day.

The following morning we made the remaining 10-15 kilometres to reach the top of the plateau. There was one more military checkpoint here but the officers were noticeably friendlier, more tourist-oriented, they even tried to help us getting fuel from the military resources.

We decided to take turn-off for some 70 km west off the highway on a gravel road as our first discovery point in the area. We got hold of a Gran Sabana map and it was indicating several waterfalls and rivers around here with camp opportunities. 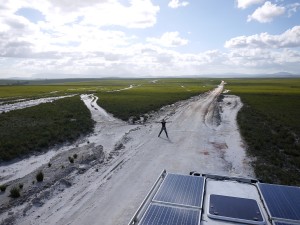 On our first day we made it just beyond Kavanayén village where the gravel road turned quite challenging splitting to several ways with amazing size of water-wash-outs and cracks. It was getting dark and we decided it was time to stop for the night. We found a good spot with a breathtaking view of one of the magnificent tepuis (flattop mountain) and decided to continue tomorrow. We met a local guide with two British tourists earlier, they were planning to come this way tomorrow to visit Kauray river and its waterfalls. So we knew we will have his Toyota tracks ahead of us to follow. 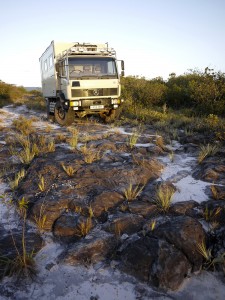 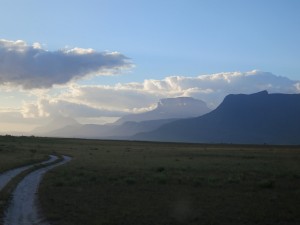 And that exactly what happened. Thankfully. At places the road was splitting in to 7-8 directions not knowing which one is the passable one. Without the Toyota tracks to follow we wouldn’t have the chance to back out if we went down on a wrong lane. The river was only 27 km form town (probably 20k from our camp spot) but it took 3 hours intense drive to get there. 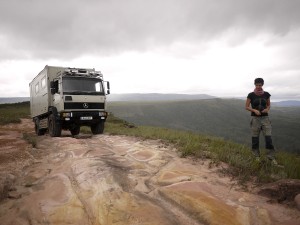 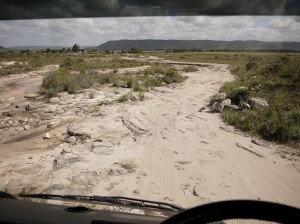 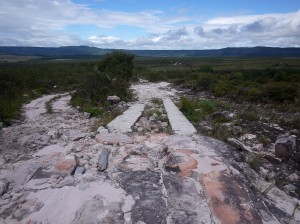 It was really worth it. It felt like it was the edge of the Earth far far away from civilization.

It had such a calm vibe. Even that it started pouring down all afternoon covering the whole place with thick grey rain-cloud, it felt lovely and peaceful. We found the Toyota pickup parked on the grassy camp area and figured that the guys went down the river to one of the waterfalls -which was only accessible by boat but we didn’t mind as the other one was walkable distance from here and it was beautiful. 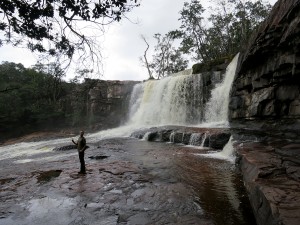 A few hours later the two Brits and the two guides returned and we made coffee and cookies for everyone and sat under a palapa for a chat. The nice guide (we found out he was actually from Guyana) gave us a few tips where to go and what to see further on in the Park. 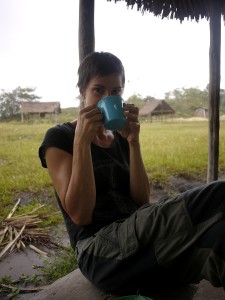 That afternoon John went out for a walk while I made dinner. We had the most peaceful night here. 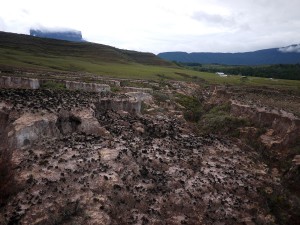 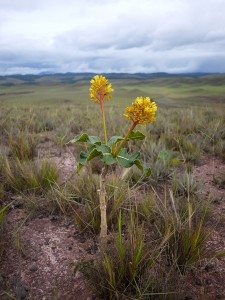 The next morning after we went for a short hike it was impossible to enjoy it as there were thousands of puri puris. The rain didn’t want to stop ether so eventually we decided to pack up and move on. Or drive back -more like it. It may seem like a lot of effort for only one night but as short as it was we loved our experience with the long drive, the weather its dramatic grey clouds and coolness (after leaving England I would’ve never thought I would miss the grey sky!) John loves the challenging roads, the fuel is practically free so we enjoyed it however long it was.

Driving back was fun and quite relaxed, we knew now which lanes to take and stopped several times to just enjoy the view and have lunch. The end of the day we made it all the way back to the highway where we knew of another waterfall a few kms off the road for our next camp. However we didn’t find the fall we found ourselves a lovely spot and called it a day. 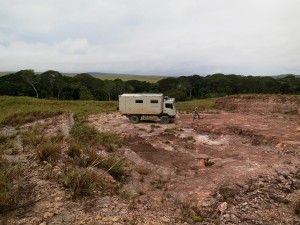 The following couple of days, as we were gradually making our way south we visited few more waterfalls. Can’t miss them there’s one round every corner. We were spoilt with camp options. There are plenty of “official” camp areas at indigenous communities but we always prefer the outback on our own. One day we found a gorgeous river, dotted with palm trees on the bank, crystal clear water but the surrounding was covered with rubbish, plastic bottles and beer cans. John and I got our large bin liners and filled up about 8 of them. Felt so much better staying there. 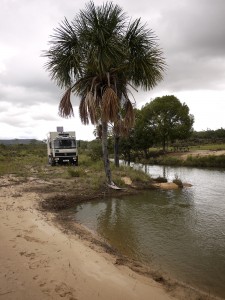 We loved our week-long travel on and around Hwy 10 through the savannah was coming to the end. It would be so easy to spend another week just wheeling around, visiting waterfalls but eventually we reached the last town before the border, Santa Elena. 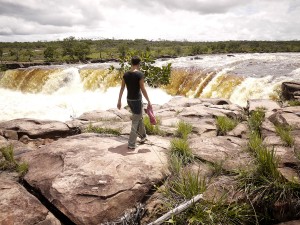 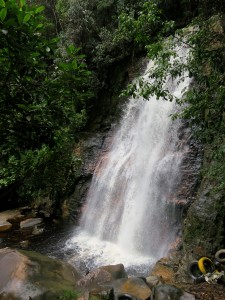 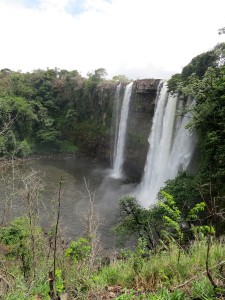 We tried to fill up with diesel here in town. After half an hour waiting in the queue all of a sudden we were threatened with jail! (if we dared to park up at the diesel pump!) by the military officer who were there. It was quite ridiculous and when we politely asked them (even spoke to the manager) if we could have at least 20l to get to the border they refused and sent us away. I know it was a busy day at the pump station but, Jeez!
This side of the country had the same policy as the Colombian border side (no fuel to foreigners -mainly Colombians and Brazilians, for several hundreds of kms of the border) This was reasonably new as we read other overlanders’ blog who could fill up here not long ago. Or was it just us? Anyway, it is understandable that the government try to control smuggling but it is really a joke. Firstly, we saw how easily fuel comes and goes under the military’s nose -they get their cut of the whole business. Even in Colombia we were able to buy Venezuelan fuel. Secondly, really? We are quite clearly tourists. And thirdly, there is a way to explain and advise us in a simple human way without threatening us with the “cuff ’em & stuff ’em” line straight away. To be honest, we still had plenty of fuel but as we were leaving soon might as well fill up with the cheap diesel as in Brazil the fuel will be 1000x more and that is a huge difference when diesel is a big part of our trip.
Oh well, we tried. We didn’t go to jail and there was the “international” pump station between the two borders, about 15km from here where fuel was a lot more than in the country but still so much cheaper compare to the Brazilian price.

Anyhow, we didn’t mean to leave just yet. We parked up at a German posada place (Posada Los Pinos, lovely place) in town and spent a couple of days getting ourselves organised for the next little detour we wanted to make before eventually crossing for Brazil.

Next, The Abyss (El Abismo)…