La Paragua is less than 200km from Ciudad Bolivar so we weren’t in a hurry. We found a petrol station too so could fill up all our containers with the cheapest diesel you can come across with (about a 1000 litre of diesel was $1)

Angel Falls is the world’s tallest waterfall (979m makes it about 16 times the height of Niagara Falls) The falls was named after an American bush pilot, Jimmie Angel who first landed on top of it in 1937 while searching gold in the area. Angel Falls doesn’t have road access. People usually fly from Ciudad Bolivar to the nearest village, Canaima then take a 3 days round trip by boat (sleeping in hammocks) to see the falls. We thought we would skip the boat and hammocks and try to fly there and back in a day (probably 2-3 hours) So we choose La Paragua as our stepping stone as it has an airport and often tourist change here to Canaima.

The drive was nice and we took our time, then as we were approaching to La Paragua, we were more frequently running in to military checkpoints. Then we understood why. It was a real dodgy town. At our last checkpoint, in town, even the military tried to steal stuff from us. They insisted to look inside the box. John went up with the first guy who were opening every cupboards and putting our ipods, flashlights, bits and pieces he could reach in to his pocket, then handing other stuff to his “colleagues” at the door. John wasn’t having it, and reached in to his pockets grabbing our stuff back, take his wrist twisting items out of his hand. Then a second guy wanted to “search” the vehicle too. In the meantime I was distracted by one officer who spoke a little English, asking for all our papers, original passport and insurance etc and telling us that this town is not safe for us. He seemed genuine (even friendly) but I couldn’t tell if he was just doing it to keep me “busy”, plus I had to keep an eye on our papers so they wouldn’t be snatched. At the end, thanks to Johnny, nothing was stolen, we got all our documents back and the English speaker official recommended a place for us to stay and let us go. This was at around 5PM so we had to consider a place for the night.

Just the other side of town we found the airport (well, more like a airstrip with a couple of sheds) and found an English speaking pilot who walked us over to several pretty grumpy pilots to translate our request. Essentially we wanted a flight to and over Angel Falls then back the same day. Considering the price of kerosene (a few cents a litre) we figured it can’t be too expensive. That evening we didn’t find anyone who would be interested to take us. That night we stayed at the airport and was hoping we’ll find a plane tomorrow morning. 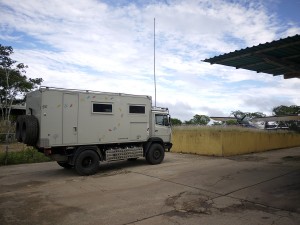 The following day we got up early and walked around the airstrip asking all the pilots if they would take us but no luck. It was a pretty shady crowd. One, after a long conversation between few men, looking and laughing at us, offered to take us for a ridiculous amount which to we said “no, thanks”. 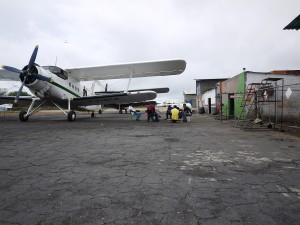 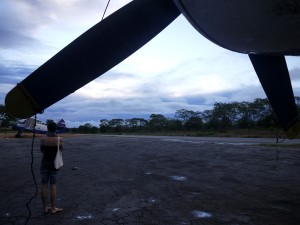 Most pilots here are transporting gold and diamond from the mines (and presumably drugs) so no wonder they had absolutely no interest in tourists. It was cool to watch a few planes land and take-off really close (no health and safety issues here) I felt we tried, did our best to make our trip happen but this place wasn’t for us, and I was ready to get out of there. We packed up and headed out of town. For our pleasant surprise the military check points were ether unoccupied or if officers were there, they just flagged us through.

We were disappointed that we didn’t make it to the Falls but it was our decision to try it this way so I accepted the outcome.

We were travelling about a 100km north on the same road we came down yesterday but turned off to East at the fork as our GPS showed a shortcut to our next town. We drove down this road, which seemed perfect at the beginning then gradually worsened until we hit a gate and right there we drove over a sharp metal piece sticking out the ground. This caused an enormous “bang!” sound and that how we lost our back tire. It took 20 minutes to change the tire and we were back on the road choosing the slightly longer, and now obvious route. 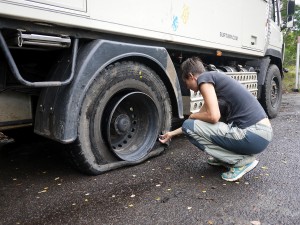 What we didn’t expect was that we will come across with a hydroelectric company and the country’s largest Dam. It was a quite posh, well organized company, they even had a visitor centre with movies and English speaking guide to take us around the dam. John was delighted and we decided to park up and go for the whole package. It was Sunday so was only us, and our guide, Jose took us to places he normally can’t take people. We -especially John really enjoyed the tour. 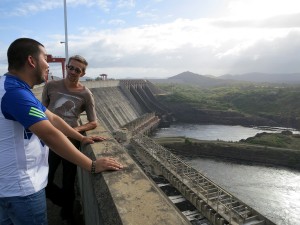 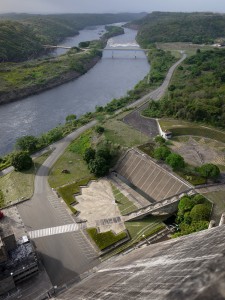 The dam was built with the help of the US at the beginning so they created a town around the dam for its engineer team with a real 50’s American style. Once the US workers left the town became occupied by the Venezuelan team. We were fascinated and asked Jose if it’d be possible for us to drive around town. (as no outsiders allowed without permission) Jose lives there and he took us around the enormous village-complex where they have supermarkets, cafes, restaurants, sport-clubs with swimming pools, it even has its own hospital, and a luxury house of the President. It was really interesting to see this. We dropped Jose off at his house, said goodbye and it was time for us to leave. 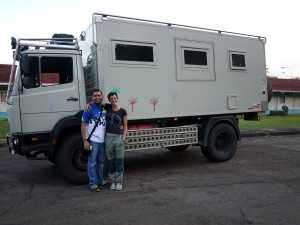 On our way out at the main entrance we asked the friendly security guys if we could tuck ourselves away in the corner for the night, as we realised we will have a long drive ahead of us tomorrow to Upata. Our map showed this as the route but didn’t know that it was a private road and that we cannot drive through the dam-complex. We will have to drive about 180km around to get to Upata now, instead of 70km that would take from here. The security guy asked where we heading tomorrow and when I told him that we are driving to Upata, he immediately grabbed the phone and asked permission for us to be able to drive across the dam and camp on the other side at the East entrance so tomorrow we can just head off from there. It was very nice of him, we didn’t even asked, in fact we said we it is OK to drive around but he insisted to help. He got the permission and a guy with a company car to lead us through the dam. It was pretty cool having the whole place for ourselves, especially with the beautiful sunset. The couple of friendly security guys there greeted us at the East entrance and showed us where to park.

For sure, it wasn’t Angel Falls but it was a marvellous and fun experience where we got to meet friendly and smiley Venezuelans who were very happy to help.

As we are heading to the Gran Sabana for the next week or so, we will be able to see some of its gorgeous waterfalls, rapids and rivers where we will be actually drive to and even park for a night or two, and that was OK with me.

Next, the Gran Sabana (aka. Parque Nacional Canaima)…