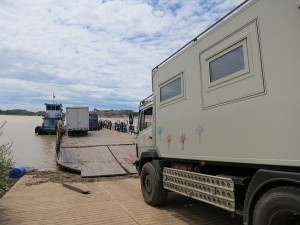 We had to take a river ferry across the Orinoco which was fun then we were driving through a breathtaking, ever-changing scenery. That’s where we found the most beautiful spot for camping, by a river with small waterfalls flowing over black, smooth, volcanic rocks and boulders. The water was fresh, cold and clear. We could drink it. We decided to stay for two nights as it was so gorgeous and peaceful, we could just bath in the water whole day. It was a nice break of the long-driving days and the heat. 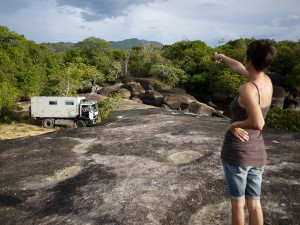 We eventually got to Ciudad Bolivar, according to the Lonely Planet, the most beautiful city in Venezuela. We didn’t have a chance to look at it properly this time. The heaven opened and it was absolutely pouring down. Also because the place (a German-run posada/camping) we were after could be reached from the ring road. It was through a few mud-road (really muddy!) but we got there at the end and we were greeted by the friendly hosts. 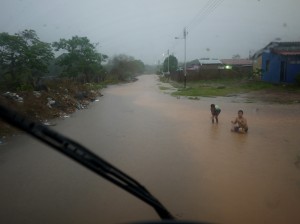 We also met a lovely Australian couple who were heading north from here. It was a travellers’ haven with all facilities, restaurant, self catering bar, swimming pool etc.

The friendly owner Peter runs a tourist operation at the airport, also was repairing the restaurant building after it burnt down a couple of months back, and just had a baby with his wife so we only met him once but he had two delightful hosts/managers (German and English speakers) and several local staff who are happy to help whatever we were after.

We stayed, nigh by night, up to 4 nights here and could do some essentials. One day we wanted to pop in to town for shopping but the staff advised us not to go with the vehicle and certainly not on our own as it is dangerous. Again, another warning of danger and when I asked why “it’s only shopping in a supermarket” They said because we are tourist and easy targets to be mugged. The manager, Benjamin took us to town with the posada’s pickup. He dropped us off at the centre to look around for a couple of hours while he had some business to do at the airport office. We walked around in the tiny, few streets but colourful historic centre and the market. Though it was pretty, there was nothing much to do or see. The museum, church and a tourist info office with wifi were closed, we couldn’t even find a cafe for a cuppa so we were just walking in circles until Benjamin got back to take us to the supermarket. 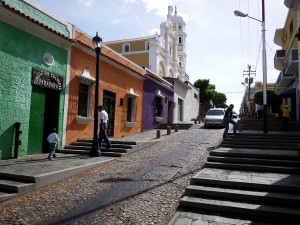 The supermarket was its own experience. Venezuela has one of the greatest potentials as a country we came across with, and one-of-a-kind resources (oil and water -they have one of the world’s biggest hydroelectric dam) yet it amazed us how impossible it was to buy basic essentials in shops and supermarkets. This made me understand why most of the people in the country seem depressed and concerned. Whatever the government is trying to do, they are doing it by controlling what, when and how much people can buy milk, toilet paper, rice, flour, butter and many more basic food and supply -if at all available. The country is sitting on one of the world’s largest oil resource and, though fuel is cheap, people have to queue for hours to get some. There are 2-3 type of supermarket and Benjamin took us to the one that considered a posh but expensive one as we would have more chance to buy things. The enormous store looked as normal at first but as we were walking down the aisles we noticed that a whole aisle had only 4-5 types of products on them spread out. 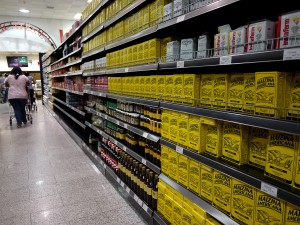 At the meat counter the queue was enormous or more like an unorganised crowd than a queue. It was interesting that they had expensive Nutella, Moët champagne and organic soya milk but no regular essentials, including normal milk. This problem, we heard about before we entered Venezuela so we stocked-up with things that last long but we still needed fresh veg and fruits. We spent a couple of more days in the posada, made use of the swimming pool, and had a lovely time with Tania and Benjamin our hosts. 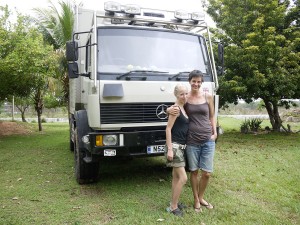 We decided to head south from the city first to get to La Paragua on road where there is an airport where we thought we might be able to organize our own trip to Angel Falls. We came across a couple of travellers’ blog (they were here 4-5- years ago though) who made it to this town and they organised their own flight.

Next, La Paragua and the Guri Dam…