We crossed the border at the Caribbean, at Sixaola as supposedly this is the quiet and hustle free border. Well, it took over 4 hours for us -the longest border crossing we had. And it wasn’t particularly complicated just a lot of waiting around.

Once we were in Panama we had a pleasant drive along the northern coast then in to the mountains. We spent our first night in a national reserve area, although the land where we found the camp spot was a huge oil operation and they had their oil pump station there. We were invited, by the guard to stay by his house on a flat spot. As we were parking up he popped out to get a huge bag of organic cucumbers for us! In return we offered him a pineapple and a couple of mangoes -as they are rare at this elevation and as we found out, he stays here 2 weeks a month, 24/7 so the fruit were like treat for him. They to catch the sunset he took us for a quick hike to the pump station where the view was spectacular. It was so nice to have cooler temperature again, after a few weeks and we had a good night sleep here.

The next morning we left early and headed to Boquete, a popular mountain town at over 2000m elevation where there was access to Panama’s only volcano Volcán Barú. This re is also famous of its coffee plantations, and this area is the last chance to see quetzals, the wonderful birds we haven’t managed to see since southern Mexico.

On our way to Boquete, we swung by a hot spring where we thought we might stay for a night and move on the next day but it was unspeakably hot and humid and just a thought of a HOT spring made our brain melt so after a quick look we decided to keep going…

Boquete at first glance didn’t exactly blew our minds. (remembering our guide book said something about this town being one of the four best places in the world to retire.) Boquete got this title in 2001 and today one who visits here can see the fruits of this statement. Enormous gated communities dot the hillsides where once was lush forest and where they not only regulate who else can move in and the colour of the houses (beige) but that what size of dog you can only keep.

We parked up in town and walked around to have a feel of the place. We found the local fire department and filled up with water, found a buffet-type of canteen where locals, small and big, some tourists, some expats, young and old come to have breakfast, lunch and dinner. Grab a tray and choose your food for a few dollars. Great place for people watching too. Spotted a few tourist offices where offered quetzal-tours (which I thought would love to see before we leave), caught up with emails at one of the few free-wifi spots then decided to stay somewhere outside of town for the night.

We headed up to the volcano. After the national park entrance there’s a dirt road leads up to the top of the volcano. We heard it is a challenging road but thought we try to drive up a bit. In about 4kms we found a wonderful spot. Really fresh and cool air, lush green hilly surrounding and lots of birds. 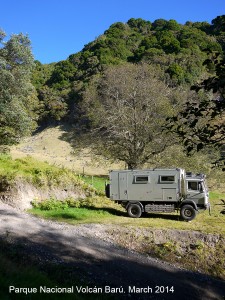 It was towards the end of the day and I was getting dinner ready as John was outside enjoying the view. Then all of a sudden he whisper-shouted me “get me my glasses and come out, quietly!” I quickly did what he said and there they were: a pair of quetzals! They landed on the tree right next to Burt. Stunning birds.

Back in San Cristobal de las Casas, Mexico where we spent a week with our birder friends, Kathi and Josh, I bought (and Kathi too) a cool quetzal T-shirt. Josh and Kathi said that now I have to see a quetzal, and they said that it will be easy in Guatemala as certain areas are full of them. But we never did. Well, we actually never made a special effort to visit those areas thinking there are still other countries… So I was extra, EXTRA pleased to see a male AND a female here at the last opportunity.

During our first night here we heard people walking by. Checked the time and it was around 2AM. In the morning John said that according to the book lot of people walk during the night to get to the top of the volcano by sunrise when it is the clearest to see both coasts, the Pacific and the Caribbean (one of the 2 spots in Central America where you can see both sides)

After breakfast we packed some lunch, plenty of water and headed to the top. We were passing people walking down. They were the ones hiking all night, enjoying the sunrise and the view up there, and now walking back down to town without sleep. We offered them some french toast I packed earlier and some water. The walk up isn’t particularly pretty, it is on a dirt road where small 4×4 jeeps making their way up with tourist who are not in to hiking. We had one these jeeps passing by us, then it broke down so we passed them, then they caught up and passed us one again, then broke down again and so on…

As we reached the top at 3478m we were gobsmacked. A huge part of the crater was shaved level and were about 17 radio antennas put up with its maintenance buildings. Man, I didn’t expect that! And strangely, no one (not the guide book nor any of the hiking-Byers mentioned it) Odd. Although we were there, actually I think John found the tower business fascinating and went to explore some of them. There was a nice little summit point with a white cross for the hikers there however, so we climbed up and just enjoyed the view for a while. Although it was cloudy the view was still marvellous and we had our lunch on the top of the world. 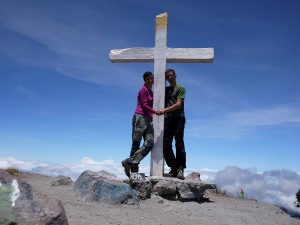 On our way down we collected 6 bags of rubbish too. It took 8 hours and 20 kms to get up there have a half an hour snack then walk back down to our spot. It was a good day.

We had a second night at this nice spot and the following day we decided to go on to a coffee tour. Well, at least me as Johnny isn’t as fascinated in the process of coffee-making as I am, besides he rather wanted to get on with booking the ship from Panama to Colombia.

My tour was in the afternoon so John and I, once again visited the local canteen for an early lunch and did some shopping before I was off. The tour took 3 hours and they showed us around on the plantation and one of the factories, then another then back to the coffee roasting shop where we started for some tasting. 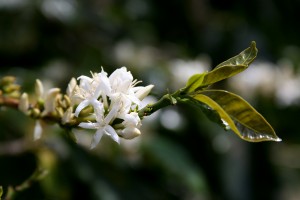 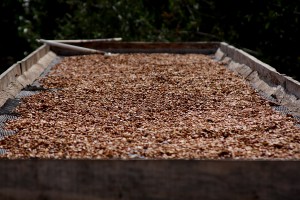 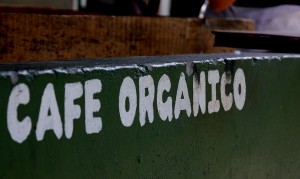 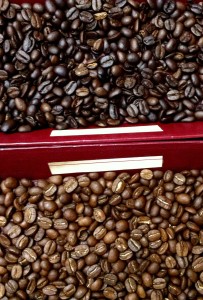 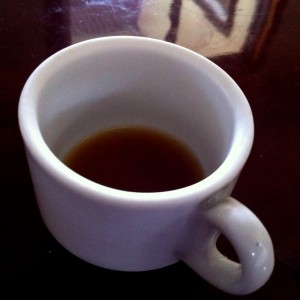 Back in Hungary, yonks ago, I started with my friends and managed a tea shop, which for I had to attend to a tea training in Vienna so for me the coffee tour was fascinating and I am very pleased I finally got to visit a plantation and learn about the process. Besides I love coffee so totally worth it. After the tour we met a couple of ex-pats in the coffee shop and had a long chat with them then we tucked ourselves away for the night outside of town.

At the end Boquete didn’t grow on us as a town but we loved our 3 days here. The town has a few things to offer and I’m so glad we visited the volcano and did a coffee tour. AND we saw quetzals without a tour guide.