After a few weeks of chilling at beaches and volcanoes, it was time to look in to Burt’s sticky steering. It has been a back-of-the-mind thought for a while as during driving, occasionally the steering locked itself for a second. John has already looked at, tightened, greased everything he could, we even have it looked at it at the workshop back in Honduras a month ago but they only did the same what Johnny’s already done.

We knew that there’s a Mercedes service in San José so we were heading there. Sometimes it is a challenge to find places as there, really are no address in Central America so we just had to drive in and ask. Having to have a good feel, which area of the city this service could be and some routine by now, we found Mercedes with no problem.

They were very professionals especially on the customer service department. It was only lunchtime and they were already fully booked for the day but they booked us in first thing in the morning for the following day. They let us park up and stay overnight at the service. We had a few hours to while-away so decided to take the bus in to the centre look around and do some shopping. That’s where finally Johnny found a phone (we drowned his phone on the first week of our journey in Canada and he really wanted one), got a few things we wanted for ages, had some lunch at a brilliant authentic local and visited the market before we headed back to the shop.

The next morning while they were looking in to the problem we were lead to the service’s cafe with wifi and endless supply of refreshments, then at lunchtime Jacky, the attentive administrator took us to the cafeteria for lunch. 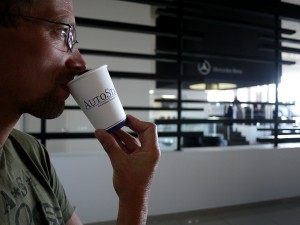 After about 7 cups of cappuccino and 7 hours wait they could find the problem (changed a filter and cleaned up things though) so we decided to move on. John had an idea what the problem might be but they didn’t have the part here, and they recommended to get in touch with Mercedes in Panama City. They did not charge us anything, as they couldn’t fix our problem (not even for the filter or their customer service) which we thought was a very generous and honourable way to treat the situation.

It was after 3PM and we had to move on. We decided to head down to the south-east coast as planned, meet Rainer and Kerstin if they are still there and deal with the steering as we come across with a suitable workshop or wait until we get to Panama City. In the meantime John got in touch with his brother in England as a possibility to order the part to his address then send it on to us. But for now, we just have to wait and see.

We had a stopover along the way and the following day we were heading to the Caribbean. As we were driving on the outskirt of a town, Guapiles Johnny spotted a truck workshop. From there we were directed in to town to a handyman, Fabrizio’s shop. So shortly, we found ourselves at Fabrizio’s where he had zillions of machines and tools for building and creating anything. He even had his beautiful, hand-made chopper not to mention the hundreds of metal pieces he fabricated. 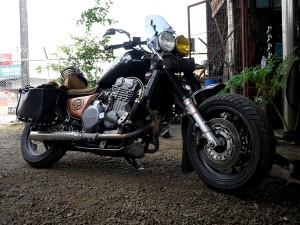 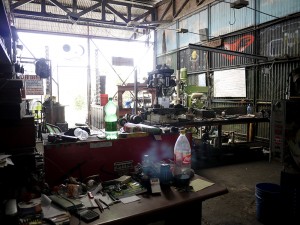 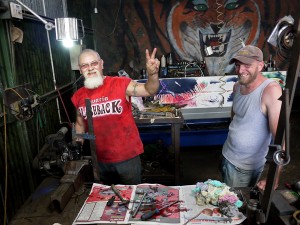 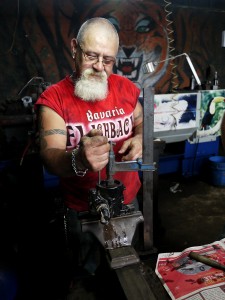 Here we also met Jamie, an American expat who were about to open his family pizza restaurant right next door to Fabrizio’s workshop. Jamie spoke Spanish and was kindly helping us translate between John and Fabrizio. They of course while John and Fabrizio were busy getting their hands dirty, Jamie and I were drinking coffee and chatted all day. By the end of the day there was no solution to our problem, but Fabrizio wanted to do a further test the next day as he didn’t want us to go without some solution.

Jamie and his family invited us to their home -about 20km out of town to have dinner and stay overnight. Burt was mobile as all parts were taken out during the day were put back in so we packed up, and headed to Jamie’s.

We were greeted by the extended family. It was Jamie and his lovely wife, Nati’s (=
herberts) house, then Mummy’s house, then one of Nati’s sisters’ house, than another of Nati’s sisters’ house. Calculate at least three children for each house, one of Nati’s brother somewhere in the middle and you have a picture of an authentic, loving and lively Costa Rican family. It was fabulous to meet the family. After having a little chat with everyone at mummy’s house we were headed to Jamie and Nati’s place where Nati’s brother, who is a top chef in San José cooked for all of us a gorgeous meal. We had a wonderful chatty evening with them and at about 11 we went to bed knowing we have to get up early to go back to Fabrizio’s. But it was very nice to let our hair down a bit.

Fabrizio and John was working all day to find the problem but at the end of the day they only could guess what part of the steering might be the one to change. Then Fabrizio was on the phone to hunt down this part. It was becoming clearer to us that it won’t be fixed right now and we will have to move on without the solution. Although Fabrizio didn’t want to give up and will make a few further calls, meanwhile John keeps the option of sending the part by Robert, his brother. 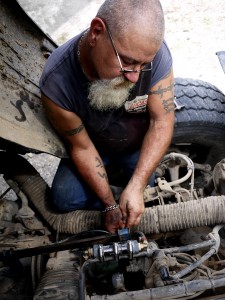 This was the end of the day on a Friday and as you can imagine, everything was closing for the weekend and we were clueless where to stay. It was clear we wouldn’t make it to the coast before dark, and that’s when Fabrizio offered us to stay at his place not far out of town. This was very nice of him and we took on his offer.

After a quick grocery shopping we headed to his place. Fabrizio lives in his own-built, uniquely furbished house -decorated his hand-made metal pieces and photos of Fabrizio’s visit to Stonehenge and London, with two lovely dogs and with his son a few days a week. His land is large enough to have a spacious feeling and it is surrounded by fields and forest and the back. Of course needless to mention the endless birds and monkeys that they live around. Fabrizio parks his chopper on his cosy back patio where there is the outdoor dining area, a couple of hammocks, flowers in pots as if chopper was his good mate to spend supper and a few cigis with. We parked up at the back and the evening just became a chilled, no-pressure, no-rush, have-a-couple-of-glasses and shared dinner soaked in rock and roll evening. Another perfect example of those wonderful moments where language just doesn’t matter for a conversation. At one point two of Fabrizio’s mates dropped in which just added to the party vibe. It was really a great evening. 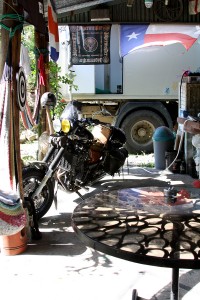 The next morning we woke to gorgeous sunshine and lovely morning piano music by a Costa Rican artist, Manuel Obregón. After taking a few photos, swapping facebook names we left for the Caribbean with a slight chance we might return if Fabrizio finds a part on Monday. Otherwise we’ll be heading on.

This was a brilliant, effortless-living experience with wonderful people.