We were heading east from Caňa Castilla to birding spot, but rattling on dirt road for over an hour (only 15-20km), after a point I couldn’t face another 80km and we agreed to change plans and turn off to Lake Arenal.

Which turned out to be a good decision actually. We knew of a good spot to camp right by the lake. After a beautiful drive (the last 20 km was dirt) We arrived to Nuevo Arenal a small friendly (fair amount of expats) town with some good shops, bars, cafes and the famous German Bakery. First we parked up at the finest spot in the town’s public, lush green park on the lake…. 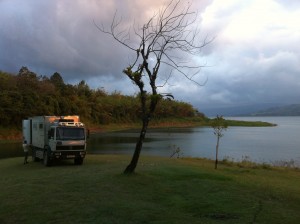 ….then walked back to the bakery for a couple of sarnies we were longing for months (no good bread in Central America) However I got to say, Agi’s homemade bread, she gave me this morning was the winner. Our pleasant surprise the French Family turned up here too. Felt like a little private members’ party again.

It was raining all night (strangely, in the dry season) which meant by the morning we weren’t so sure that it was a good idea parking on the grassy down-hill slope that became slimy and now an up-hill. Old memories of digging in slippery mud were coming up to the surface. But, thank goodness it was fine and Burt made it up with reasonably cold engine just fine. Had a morning chat with the French Family, filled up with some water and headed south to Volcán Poás.

We were still driving by the lake, which was stunning (getting a bit more and more touristy as we were approaching Arenal Volcano but we found the hot spring Andreas (French Family’s Austrian dad) mentioned this morning. There was an inauthentic, fancy and expensive spa hotel that takes a fair bit of the hot-water river, though as Andreas said just about 50 meters below the hotel, under the bridge is the real deal for bathing in the same river with the locals for free. It was Sunday so there were just enough people, families to have a nice atmosphere, and just like us a few gringos found the spot too so it was very nice, surrounded by lush jungle, exotic birds and butterflies flying around the warm moist air. 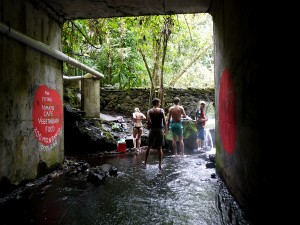 After the lovely soaking we were a bit behind but with a no-stop drive we made it up to the 2500 m Poás. It was actually a gorgeous drive and as we were elevating the scenery changed from tropical to highland with pines forests in thick fog, strawberry fields hugging the small villages and sheep herds replaced the grazing cows.

We missed the opening hours of the volcano (it is a national park) but we knew that it is OK to park up overnight either by the entrance or just by a dirt, forest road that leads to nowhere from the entrance. We decided to drive up on this dirt road and in about 4-5 km’s we were at a beautiful open area, a perfect spot with a gorgeous view of the cloud-filled crater and the valley where San José (capital of Costa Rica) and other towns lie. We just caught the magical sunset and soon the lights came on in the city and the towns providing with a stunning night view of the valley. 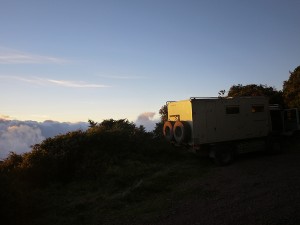 The temperature was very refreshing and it dropped to 6C over night, then warmed up to 22-25C during the day. We did a 7 km hike the next morning (before 9 as the clouds are coming in to the crater at 9AM every day) in the hope to see the crater but no clear view really, although the hike was very nice (one of our favourites) We decided to stay one more night and enjoy the chilled air and silence of this peaceful place. And this way, we could see the sunset again. 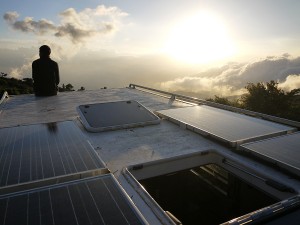 On the third day morning we were ready to move on and hunt down the Mercedes service in the capital for checking up on Burt’s steering.

Next, San José and Guapiles…