It’s been almost 5 months since I last posted anything due to simple laziness. Though the past few months weren’t uneventful I just couldn’t pull my finger out, sit down and write about it.

Since February we’ve been to Chile, back to Argentina where we did a few weeks work on a family farm, then said goodbye to our friends in Uruguay, travelled up north on the coast of Brazil to Sao Paulo where I flew out from to Europe for 3 weeks to see my family and back to Brazil. SO loads to catch up on…

CHILE:  After our glorious month in El Bolson we finally piled ourselves away from the warmth of the loving family and headed to Chile. Despite our lack of research we, by chance crossed the border at a great place, Futaleufu where we ended up staying for a week. A very sweet and charming little village full of outdoorsy opportunities. Here we had a chance to hike and walk a little each day and as Futaleufu has few of the World’s best rivers we took on for a day rafting tour which was absolutely excellent fun. NOTE: if you consider doing the same, please use these guys (much better value than other companies, highly skilled English/Spanish speaking guides, lots of fun and their office also a study centre for environmental research for keeping the rivers clean -fascinating conversation with the first-a-bit-grumply-then-very-friendly and very enthusiastic scientist) Please support them if you can:  http://www.exchile.com/

Apart from the well needed exercise and good air, we of course visited each bar and tasted all types of beer in town, besides as it is a little touristy place it has a good mix of nationalities -ex-pats, travellers, holidaymakers we met a few good eggs so no wonder we forgot to leave for a week. 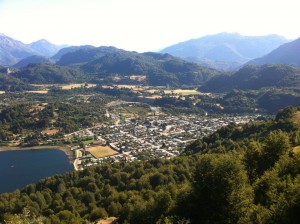 After we left we had a couple of weeks of Patagonian boondocking heaven. We found the best places to camp mostly by crystal clear rivers and lakes throughout as we were travelling south on the Carretera Austral.

As the “highway” mostly wash board dirt road we had a bracket cracked and needed a good welding place just by the time we got to Coyhaique, a reasonably large town with shops, banks and cafés. This was also handy as this town will be our last town  until we get back to Argentina so besides the welding job we could stock up here with food and essentials but most importantly change money for Argentina. *Those who are not familiar with the situation in Argentina: The best have dollars -physically, and change on the blue-market with a much better rate than sticking your credit card in to an ATM and pull out ARG pesos at a very bad rate. So in Chile we have been taking large amount of Chilean cash everyday with an intention of change it to Dollars before we cross the border. This town seemed our best bet to change our Chilean pesos to US dollars as they had proper banks with reasonably good exchange rate.

Spent a few days in this town and once the welding and shopping was done we were ready to leave, only had to pop in to the bank to change the cash. That’s when the crap hit the fan for us. We were robbed. In the bank. By the cashier guy! This was a proper “first world” bank with standard equipments, security cameras, white shirted polite bank assistants and so on. We handed the large amount of pesos which was about 2.5 inches thick batch of bank notes (counted out the exact correct amount we wanted) The guy took the batch, stepped aside (out of sight) for 40 sec and on his return he counted US$1000 (worth of pesos) cash less that we handed to him less then a minute ago.  You know, first you just think he made a mistake so asked him to put the notes back in to the counter machine and count it again. (He had the wooden face of a cold blooded criminal that some of the excellent Hollywood actors can imitate so well in those Blockbusters)  Then very quickly it dawned on us that we undoubtedly just have been fucked. From this moment it was our words against his. We did everything we could -made a scene, asked for the manager, insist to look at the cameras, went to the police and so on. But we knew… the money was gone.

We played the scene over and over again in our heads, we analysed it inside and out, we looked at it from a thousand point of views but what we have been left with was a stinging, stomach-sinking feeling that we knew time will fade. My only “positive” view on it was that if we had to loose this money, I’m glad it didn’t happen at a gunpoint in Venezuela or somewhere like that.

As soon as we realised that there’s nothing anyone can do about this, we pack up and got out of there. We headed south with the intention to cross back in to Argentina in the next day or two.

We reached Lago Gral. Carrera and for our surprise we spent a week around this beautiful lake choosing different locations each night. As much as we wanted to leave Chile asap, we found this area and the people quite soothing and friendly. I guess we just had to go with this natural timing of process. 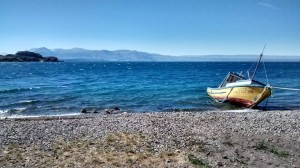