After two long days of driving in Honduras from Trujillo to the border we finally crossed to Nicaragua.

Perhaps we were exhausted from a few long days drive and, I suppose from a week-long worrying about Burt, time, finances and keeping up with all, our impressions of Nicaraguan people, at first might have not been as accurate as it would have if we are in a more…. tranquil state.

Straight at the border we felt a huge difference between Honduran people and Nicaraguan people’s attitude. They seem to be rather unfriendly and unhelpful, almost looking out for problems so they can enjoy a bit of “fun” with dumb tourists. It might sound a quick judgement but as we refused them spraying lethal chemicals inside our truck (outside had to be done regardless) they let us go with no problem but they reported us at the police. The transport police, of course couldn’t wait to grill us a little and have a few “inside” jokes on our account. So this didn’t go down too well as a “welcome to Nicaragua”.

As usual, John did his homework and looked up areas and places to visit in the country so we headed to a national park. We knew there were much to see there. Volcanoes, hot springs, national parks, lakes and so on. We were looking forward to visiting a few of these.

At first glance Reserva Natural Tisey Estanzuela didn’t look much to me. It had a lovely waterfall though, which we had a chance to have a quick dip (well, I did. John decided to stay away from the water) before headed up the top for the famous 360 view. We found a couple of rather grumpy people at the gate. No matter how much we tried being friendly and smiley, it didn’t do it. So after a slightly disappointing and only 160 degree view we jumped back into the truck and headed back to the little village we drove through earlier. There we found a friendly (!) lady who let us stay at her property which was great and we thought, “OK the unfriendly people are behind us”.

The next day we drove hundreds of km’s visiting places we looked up but just couldn’t connect with the people. Somehow everyone seemed quite sad or uninterested and somewhat bothered. So we kept moving on and on until we found ourselves in the south (where we meant to be at least 5 days later) But we were here, found a place to stay for the night. The following day we visited Masaya a bigger town in hope to find a few necessities but it was hopeless.

Another place we wanted to stay was at the Masaya Volcano where, we heard from our friends, we could park and camp right at the rim of the crater. It was the No.1 thing we were looking forward to in Nicaragua. As we arrived at the park entrance and found out the ridiculous various fees, which adds up to be way over than a US national park entrance is, we also found out that parking overnight at the volcano is no longer allowed.

I believe up to a point that “what I get from the world is a reflection how I am with the world” But we were trying very hard to be very friendly, possibly even more than in other countries but all we got was a “couldn’t be bothered” attitude almost everywhere we went.

After one more try to get to a place we wanted to but didn’t get anywhere, Johnny and I decided to pack up, head down to the beach for a night and cross the border to Costa Rica the following day.

It was getting late in the day, trying to get to places coming across difficult people we were tired and all we wanted is to get to the beach, get some breeze a couple of cold beers at the end of the day and an early night.

There were a couple of choices of beaches to stay. First we drove to the further one which sounded remote and very nice. When we arrived, it was sure lovely but the lady who meant to own a cabanas/campground was downright rude to us so we didn’t have a choice but leave. We also asked a couple of more cabana/ camp places to stay but they just could not be bothered. So we left for the other beach another 10-13 km back.

Finally arrived at this beach just as the sun gone down. It was a small perhaps a bit more lively beach with a couple of palapa restaurants, a surf rental and just enough surfer dudes to create good vibration. One guy ran up to us as we rolled up, and asked if we were “…with them?” pointing at the direction of the beach where we saw campers on the beach; The Overlander Family, The Dutchies and Mire and Alex -who we met in Antigua, Guatemala -they picked up a backpacker Sharon in El Salvador a month ago so now they were travelling as a threesome.

Now this was great news! Just what we needed. I ran up to them, while John drove around and parked up as the 4th vehicle next to Panda (the Dutchies rig) right on the beach. We were very happy to see old and new friends. They were just getting ready for dinner so we joined them and it was brilliant.

We ended up staying for 3 nights and so did the Overlander Family who meant to leave the day after we arrived but decided to stay 2 more days. It was brilliant to catch up with he Dutchies to see Dunya, also catching up with Mire and Alex and making friends with Sharon -sassy Brit with excellent sense of humour. We had a wonderful couple of days having a bit of fun, relaxing and recharging. 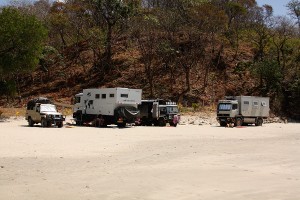 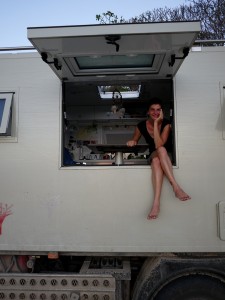 On the third day morning we were ready to move on and cross the border. As a farewell to us, the Nicaraguan border authorities made our exit, once again and for the last time, a long and unpleasant experience being as disorganized and miserable as it was on the way in. Once we were done and crossed to the Costa Rican side for entry the sun came out and we couldn’t have received more polite and friendlier welcome from the Costa Rican people. The entry was busy and involved a lot of walking back and forth between offices but everyone was very helpful and all went smooth.

Our impression of Honduras and its people was very good. Possibly our favourite country so far. We had a chance to boon dock a lot, always finding local villagers, farmers to get permission and we always got gentle curiosity, a nice welcome and friendliness from them.

Honduras’ nature or point of interest (apart from a few obvious ones) isn’t as exciting as its neighbours’ but its people’s kindness certainly makes up for the plainer vista.