We left Clarissa Falls in the late morning hours knowing that the border is only a few miles from here and that the crossing shouldn’t take longer than an hour or two.

Shortly after we left we arrived to the Belizean side of the border. We gone through the first bit of the process; paying the exit fee(!) (these countries have all; sorts of ways to squeeze more money out of tourists even in the last moments) So we paid our fees and moved on to get our passports stamped out where the immigration officer informed us that according to the stamp in my passport we were suppose to leave Belize 23 days ago!

Apparently we got a 24 hour transit visa at entry.

When we entered Belize, on the 30th October, the officer asked us about our plans. We told him where we’re going and what our plans were for the next three-four weeks. He didn’t say a thing and gave us the stamps then he scribbled the date on the stamps.

Now, this guy is saying that it was for only 24 hours??

“You need to go through that door and wait there until you are called by Mr. Hopkins, the chief officer”

Needless to say I was nervous. But John was pissed off. After just 10 minutes wait the same immigration officer we just spoke to came though and told us, kindly, that in our situation we have three “no, four” options:
1; drive back to the entrance border and sort out our stamp ourselves.
2; pay the $1000BZ fine.
3; or go to jail.
Then he left…. Wait, what is the fourth option?? But we didn’t get an answer.

So we waited and waited… A security guy came in and told us that we can’t wait here because it is a corridor and it is only for short-time waiting. We said that we were told to wait here. Oh man, John’s head nearly exploded. The guy was persistent so we called the officer who knew us very well by this point. They sorted things out between themselves in Spanish and we were allowed to stay. Good, because John was having no sense of humour at this point. We were waiting for over half an hour by now.

In another 30 minutes or so, finally we were called. A large, pan faced, black guy waited for us and asked what our problem was. John very politely but confidentially explained the situation and how they made a mistake with our stamps and how we don’t understand the 24 hour stamp when it was clear that we needed a month stay. The scary guy listened, then looked at our stamps…. “I don’t understand it either” He said.
Then he left the room for a few minutes when he came back he just asked us to go out, around to the window. And all was sorted. We went back to the window and we got our exit stamps in our passports without any problem.

We were snapping at each other at this point. John was upset with me, with the Belizean immigration and, I guess, with the world.

We needed Guatemalan money (Quetzal) for the Guatemalan border crossing process and between the two borders were unofficial changers. John wasn’t having their rate, thinking there must be a bank so we’ll get the official rate. Turns out there’s no bank so shot ourselves in the foot. He got back to change some dollars…

Not knowing how much we need, Johnny just got enough to sort out our passports, vehicle papers so we were good to go but wait, there was a bridge.
The shortest-and-most-expensive toll bridge in history and we didn’t have any Quetzal left. We told the tough lady that we’ll park up the side of the road and get some cash. It took ages to find a bank. Got the cash, bought some essentials, paid for the bridge and finally left.

All together it took nearly 5 hours to cross the border between Belize and Guatemala. It was a silly mistake and a good lesson. From now on, we both have to double check all stamps, dates and all on our documents when crossing the border.

We weren’t happy when we finally left the border crossing town. We had three options for camping on our first night in Guatemala. One was just half an hour drive from the border. We got there just a little too early in the day and none of us were in the mood to drive up 10 km on a dirt road only to find out that the place doesn’t exist or something (fair enough, we were slightly pessimistic that moment) so we skipped that one and the next one too and ended up in Tikal.

Tikal is Guatemala’s (if not the whole of Central America’s) most visited Mayan archaeological site. “The Mother of Mayan pyramid sites”. And it is located in a national park, in the jungle. It has facilities even a campground. Even after our time consuming border crossing we got here by 4PM. I was glad to get here, knowing we have a good place to stay.

Somehow we didn’t think this through, we just rolled up at the end of the day and bought our tickets for the next day then drove in to the park. Now it was getting late so we did not have a choice but park up here. After buying the two pricey entrance tickets we had to pay the stinging cost for the camping, which was actually only a simple parking on a grassy patch with no facilities. This was the last straw, after this day John felt “let down”.

Catching the last minutes of the sunlight, we went for a short walk where we saw toucans gathering on a fruit tree making a mess underneath the branches. It was a lovely sight at the end of this day. Soon it was dark. Not having electricity at this part of the world, the whole place felt like it was covered with a black velvet blanket with sparkles on it. 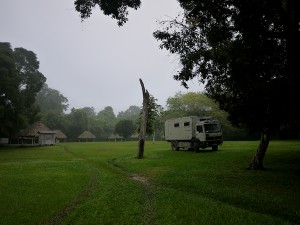