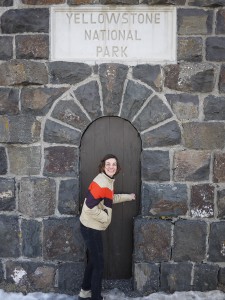 YNP is the first national park (in the world) and is basically a massive volcanic crater where we can actually walk/drive on to the top of it. (last eruption was half a million years ago and not predicting one anytime soon so it was OK) There are a few more smaller volcanoes around in the park but this biggie has the most offerings to visitors with its ever erupting geysers, steaming prismatic hot springs, bubbling mud pools and so on. The park also packed with wildlife including huge herds of bison, elk, deer and the magnificent looking big horn sheep that gracefully hops down of steep cliffs, wonderful birds, coyotes, black and grizzly bears and my favourite; grey wolves. 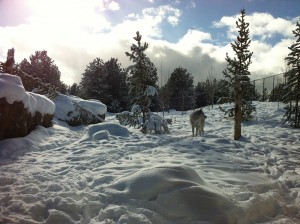 The other fun thing to get to the YNP in the winter is that, due to many cross country roads being closed, we had to drive in to Montana then back into Wyoming. This was cool so we got to see a bit of Montana also known as the Big Sky Country. Oh man, and it was. Something there that stretches out the sky and its blue sparkles as nowhere else. After a long day driving we settled at a fishing spot by a river about 40 miles from the north entrance. 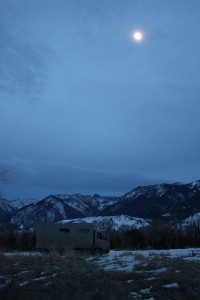 The following morning arrived to Mammoth and straight to the ranger office to familiar ourselves with the activities around the area. Mammoth is a small posh-looking town like a little antique jewelry box. The few main buildings (the ranger office, post office a restaurant and the grand hotel) are nice, colonial looking stone buildings. Had a nice big walk around the sulphur geothermal terrace just walking distance from town. 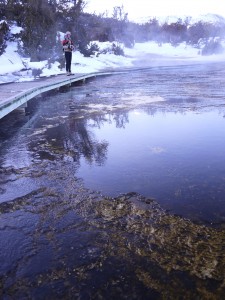 Then later we decided to visit an open natural hot spring just a few miles out of town for a plunge. No facilities just a simple car park, half a mile walk into the wilderness and we were there. The reasonable size natural pool, where the boiling hot spring mixes the ice cold river had only a few people in it. In fact it was only a 6 members Native family and us. The two little twin boys, three man and a woman looked just as beautiful and distinguished as I imagined Native Americans look. We we relaxing in the hot water enjoying listening to the 3 men singing native folk songs meanwhile admiring the rising full moon on the purple evening sky. (honestly, I didn’t make this up)

The following day we drove to the east end of this one open north road to a little town called Cooke City. Stopping every now and then for short hikes, taking photos or just admiring the wildlife. Sometimes we didn’t have a choice… 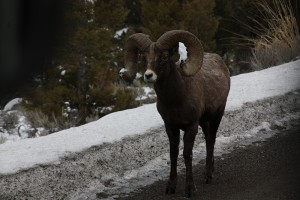 There was a section in the road that wasn’t cleared and gritted and we found a huge delivery lorry slipped into and stuck in the snowy gutter so we stopped and hooked Burt to his cab and our little Burt managed to pull the 30 ton truck out. Haven’t seen a man happier. 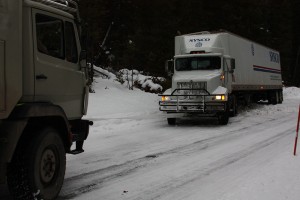 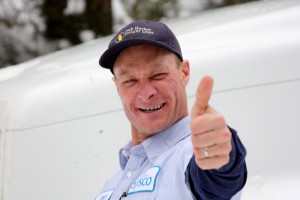 Cooke City is in fact in Montana (again, we were in and out of the the two states) and “city” is a generous word for the place. It’s a wonderful small town that is hugely busy in the summer and has a cool atmosphere in the winter with skidoo dudes and cross-country skiers. Seldom our ski supply we went for a nice big walk in the snow then found a fantastic place to eat dinner, have a few beers and chat with the locals.

It really was a nice place and glad we went. The next day we headed back to Mammoth and arrived finding a herd of bisons wondering around in town. It was a bizarre sight for us but apparently they do wonder in town every now and then. 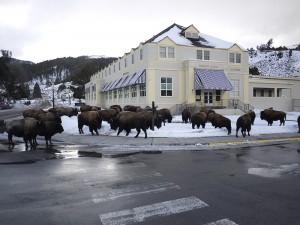 Though the rangers jump on horse backs and herd them back to the wilderness. Mammoth is the edge of the national park so if the buffaloes would make it to the other side they’d be outside of the Park which means they would be without protection and hunters would be free to shoot them. So that was done and dusted within a few hours. We wanted to stay another night here again and before bedtime wanted to visit the natural spring bath again as our last time was so special. Well this time it was….err…. different. When we arrived we found the pool packed with screaming, laughing, buzzing college kids, drinking beer and eating peanuts. So this time wasn’t so special.

The next day we decided to move on and try to get to the Park’s west entrance. This was a 4 hours round trip out of Wyoming, in to Montana then in to Idaho then back to Wyoming. Simple.

On our way there, we stayed a night in a deserted primitive campsite by a river before we arrived to West Yellowstone and that is a whole new chapter, I’ll be reporting on that…