We’ve been thinking for a while to go to the Annual Overland Show that is held in Bad Kissingen, Germany. 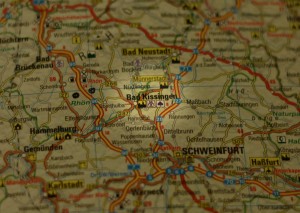 It is a 4-5 days fest in June for overlanders and off-roaders where they can show off their luxurious vehicles with tremendous equipments and tyres size of a car, mingle with like-minded folks, meet manufacturers and companies who are specialised building parts or perhaps the whole of these vehicles.

So it seemed like a good idea to go but a couple of things we needed to consider were;
1. it is quite costly. We thought perhaps driving would be more convenient in case we buy some bits for the vehicle so we just chuck them in the car and drive it home.
2. it is exactly at the time when we are moving houses. And it isn’t just a quick move. We need to sort hundreds of items and think 4-5-6 months ahead: what goes to storage and what comes with us then later to storage but keeping the season change in mind too, then prepare and clean the whole house and the garden for the new people moving in.

So, of course, we decided to GO!

After a long few days dropping off the truck at the engineer company, boxing, packing, lifting, storing and moving, just as we were in our ripped jeans and worn-out T-shirts, with a few last bits in our car boot -some cleaning products a pair of rubber gloves and the hoover; Plus! leaving the house keys with the purchaser’s mother (practically a stranger) as we wouldn’t be there for the completion day, we headed down to Folkestone to catch the Eurotunnel.

A puncture, a few wrong turn-offs (as the satnav broke just as we left England! So I was the map-reader) and about 5 kg of cherry munching later we finally arrived and headed to the show.
We really came here to get inspired, find an answer, as it were, for how we should do this project also get a few tips and perhaps some good offers, meet manufacturers and of course to feel the buzz and shoulder-rub with hardcore globe-trotters. What we really saw on the show was some unbelievable vehicles, custom-made for a fortune for their owners who travelled extensively in their dreams but probably never got further the borders of Germany. OK that might not be true but I mean, just look at these beasts all shiny not a scratch on them. 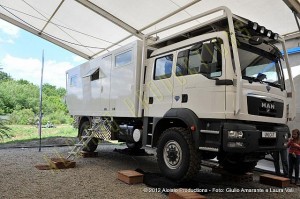 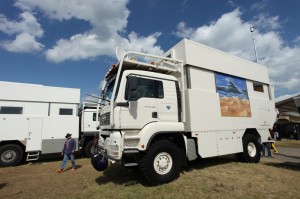 So the next morning we decided to ditch the show and visit the campsite instead where most of the visitors were staying with their overlanders. This was far more exciting than the exhibition. I felt these folks were the overlanders camping with their converted MAN and Merck trucks, sometimes, DAF etc. And these vehicles had far more creativity put into. 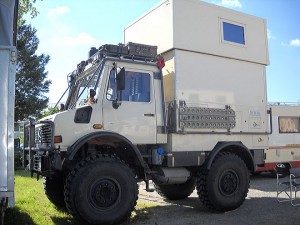 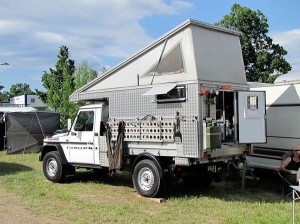 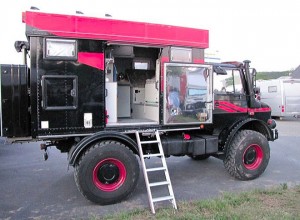 These people were all very friendly and happy to chat through how they converted their trucks. We had a few good chats, invites in to their vehicles to have a look inside. Most of them had dogs that they picked up on their travels in Egypt, South America or in remote Mongolia. I quite liked that!

So we got the inspiration we wanted.