As we crossed the US border (and just about escape jail for trying to smuggle avocados in!) from Canada a few days ago, we travelled down on 61 by the vast and sparkly Superior Lake. 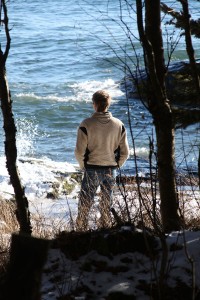 This was a very pretty drive with plenty of National Forest areas so we treated ourselves with a stop-over for our first night in the US in the woods. 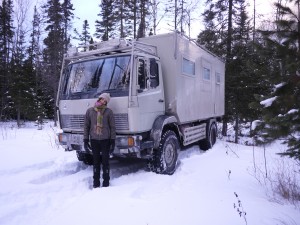 Next day needed to do some shopping in Duluth and from there we headed across towards West on 2. Unexpectedly stopping for the night in a small town called Floodwood. We meant to press on after filling up with diesel and fresh water but were touched by the friendliness of the young petrol station guy so we decided to stay in this town over night, also the prospect of having a couple of beers and a burger in the local was tempting too. Spent a fun evening chatting the youngsters (one of them celebrating his 21st -spent more time horizontal on the floor than standing) It was fun.

Next day we headed toward west on small roads and spent one more night in a wonderful snowy forest. In a small town we met the super lovely lady -mother of the local butcher. She was absolutely thrilled to meet people from England and -as it’s illegal to sell any game meat, she gave us a whole bunch of venison pepperoni as a gift! Really delicious snack! And with these lovely memories we exited Minnesota for North Dakota.
We’ll be reporting from there next time.
Ciao Belli!